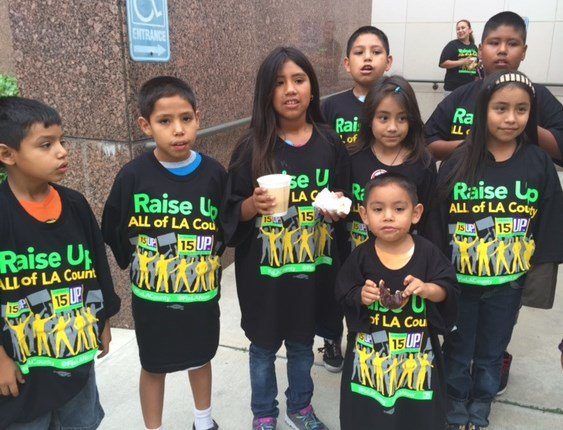 The line of people standing outside the event in downtown Los Angeles snaked out the door and down to a sidewalk—but there were no velvet ropes and it wasn’t at Nokia Center or L.A. LIVE. The venue was the Kenneth Hahn County Hall of Administration.

The hundreds who waited Tuesday morning in muggy heat had come to weigh in on a measure before the Board of Supervisors to increase the minimum wage in L.A. County’s unincorporated areas.

Perla Lagunas and her kids traveled from North Hills in the San Fernando Valley to show support. “I represent a low-income community,” she said. Her mother was a garment worker who struggled with bills and groceries. “My mom worked with people who wouldn’t pay her a good wage. We grew up so poor– sometimes we didn’t have food. We want to let the community know—wake up!”

Representatives from the National Council of Jewish Women stood in line to enter the hearing. “We believe people should be able to live in dignity,” said Cipra Nemeth, a Los Angeles board member, adding that L.A. is an expensive place to live. “We can’t expect people to live on eight or nine dollars an hour,” she said, and create what she called “a permanent sub-class.”

The Board later voted 3-2 in favor of Supervisor Sheila Kuehl’s motion to direct county attorneys to draft a law that increases the minimum wage to $15 over five years.

“It’s a very significant step for a local government,” said Dan Flaming, executive director of the Los Angeles Economic Roundtable, and co-author of many wage studies. He called it the most “geographically extensive measure so far.” In May the Los Angeles City Council raised the local minimum wage within city limits to $15 an hour by 2020.

The L.A. County raise would affect 118,000 wage and salaried jobs, and impact 10,100 businesses in 53 unincorporated areas, Flaming said. The recently-approved City of L.A. measure could boost the monthly bottom-lines for as many as 800,000 low-wage workers.

But Tuesday’s vote packs a huge policy wallop with potential influence across the U.S.—the Board’s five members oversee an annual budget of more than $27 billion . Flaming called the vote “a senior policy action at an elite level of local government.”

According to Flaming, the Economic Roundtable’s studies predict a local economic boost, particularly in low-income communities. “Yes, there will be changes,” he said. “Yes, money moves from businesses to workers.” He added that part of the money that gets moved into L.A. workers’ pockets would have gone to stock dividends disbursed all over the world. Now it will go to local communities.