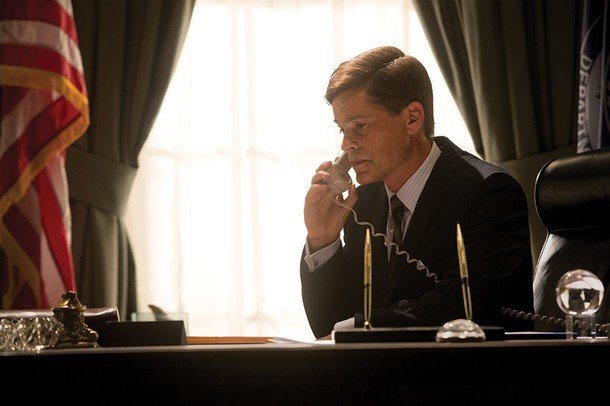 The motorcade of JFK commemorative TV programs began this week and will continue through the half-century anniversary on November 22. The 35th president’s reputation has run the arc from martyr to cultural piñata and, if JFK: A President Betrayed is any indication, is returning to sainthood.

Like just about anything open to historical interpretation, Kennedy’s thousand days in office and his assassination provide grist for the relentless, endless shouting matches that have replaced the American conversation about our national identity. In fact, I would say that the culture wars did not start with the Pill, the Beatles, Lenny Bruce, Timothy Leary or Mario Savio – they began the minute John F. Kennedy was pronounced dead.

There was some minor confirmation of this today in the online reaction to the review, by Los Angeles Times TV critic Robert Lloyd, of the National Geographic Channel’s Killing Kennedy, a dramatization of the book by Bill O’Reilly and Martin Dugard. So far the comments have been fairly unhinged. Here are some gems, quoted as they were written:

“I am surprised that Robert Lloyd didn’t blame the killing on Bush. “

“Here’s a clue that the writer is a bias weeny: Ignores specifics to repeat general complaints over and over again. . . . Whatyya expect from the LASlimes. I’ll watch it and decide myself.“

Now, I have to say, not only is Lloyd’s piece not a hatchet job, it’s definitely not a “liberal or indoctrinated” review. After noting the monumental scale of the subject and small budgets of basic cable movies, Lloyd says “the film . . . is not as bad as it might have been. That is to say, it fails only in the expected ways.” Then he shorts actor Rob Lowe’s resemblance to JFK and the fact that the script doesn’t give Ginnifer Goodwin much to work with as his wife Jacqueline.

There are some other jabs, including Lloyd’s conclusion that Killing Kennedy the TV movie “makes these events and their players seem smaller than life.” But, to quote another writer, watch the film and decide for yourself. The point the critic’s critics have unintentionally made is that the air of public discourse has become increasingly toxic since the culture wars flared up again in this century and shows no signs of clearing.

Related Topics:Bill O'Reilly
Up Next

Interview With the Director of ‘Following the Ninth’