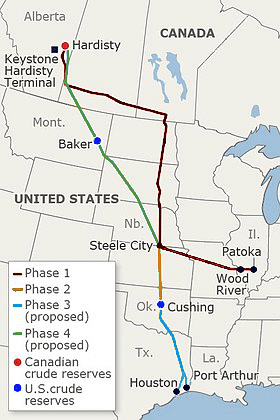 With a trumpet blast from the sources of conventional wisdom, the Keystone XL pipeline charged through the news sources last month. When the State Department released its positive environmental report that is seen as clearing the way for a pipe full of Canadian oil slurry to run through the heartland of America to the refineries of Houston, the pundits lined up to salute. They said the XL would add to American oil independence. They said it would bring jobs. They said it would never cause any of those silly problems the environmentalists were bothered about.

But as usual, the CW is wrong on all counts. The proposed pipeline will bring crude from the tar sands in Alberta province, down across the fragile Midwestern Ogallala aquifer to south Texas where it would be refined by the oil industrial complex, then shipped out to markets in Africa and South America. That’s right — the oil transshipment is not intended to produce for the American market, but for export to other countries. Crude from Canada, refined here, then sold abroad does not affect American balance of payments or our petroleum dependency on regions such as the Middle East. It simply provides a pathway for Canadian crude to reach markets for Canada. If it helps any nation’s balance of payments, it helps theirs.

Meanwhile, the U.S. takes all the risk. Pipelines are known to leak. The Alaskan pipeline has leaked hundreds of times over the decades of it life, and now costs more to patch and clean up than it is worth. This sketchy technology will cross through a region dependent upon an underground basin for all its water needs – drinking, irrigation, industry. The breadbasket of America cannot survive or feed the nation without this clean water source. While the proposed route has been shifted slightly east of the most vulnerable areas, leaks will likely still affect the aquifer.

The big issue, of course, is jobs. Will the pipeline create jobs for Americans? One response is, well, yes, but at what price to the environment? Or, we could look at what is actually occurring where preparatory work on the pipeline has been approved and is under construction – in east Texas. There local people from communities along the route say that promised jobs never arrived. One writer said that although there are several qualified tree removal firms in their small town, the pipeline pathway is being cleared by companies from out of state, and the jobs filled by people who already work for those companies. If anecdotal evidence is not enough, a Cornell study says that instead of the 20,000 jobs predicted, only about 20 will be full-time and another 2,500 to 4,650 temporary jobs will result.”

Another bad sign for American workers: No one in Houston appears to be increasing refinery capacity. If new sources of crude are expected to meet American needs or expand exports, someone ought to be thinking about this – even in non-union Texas! I’ve read a lot about this issue, and nothing mentions expanded refining capacity.

Finally the conventional wisdom says that if we don’t let Canada build the pipeline here, they will build a refinery on the Pacific and ship it from there, and the U.S. will lose out on all fronts. But there is a reason why our northern neighbor wants to route it through our Midwest: The environmentalists in British Columbia would never let them get away with it. So it is through laissez faire America, or nowhere.

When this country looks at a project like this one, Americans ought to ask themselves some tough questions: What is the purpose of this project? Who will benefit from it? What are the risks? And if there are jobs from this work, who will get them? How much will they be paid? How long will they last? And, finally, what are the alternatives that could provide better jobs that are healthier for the planet?

Related Topics:Keystone XL Pipeline
Up Next