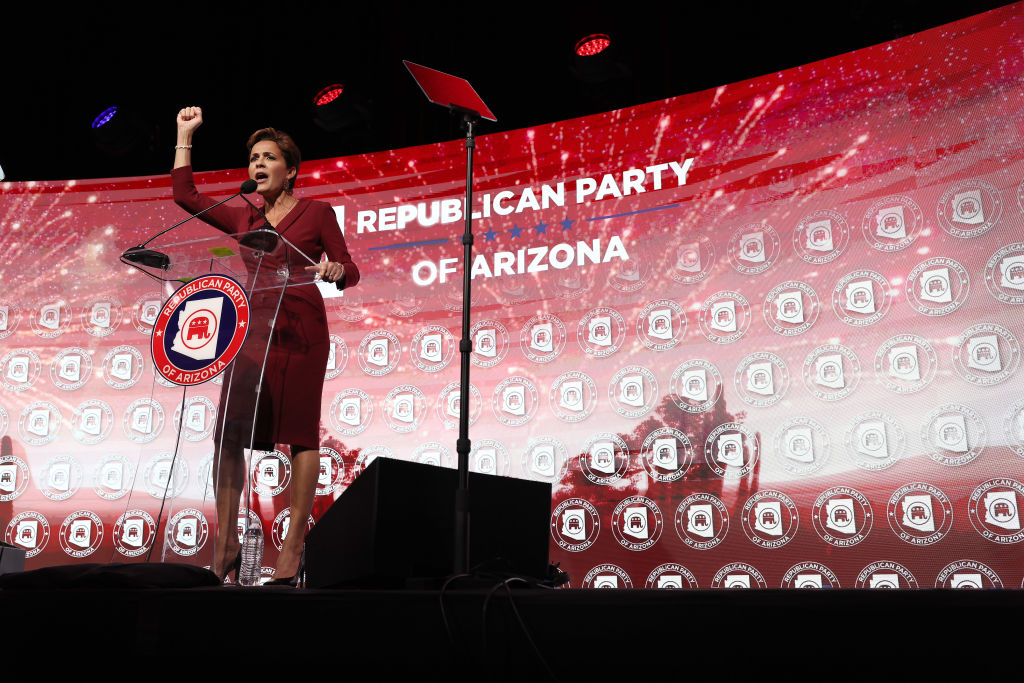 If election denier Kari Lake got a drubbing last week, it was despite money that flowed from corporate America to a campaign committee supporting her effort to become Arizona’s next governor. Katie Hobbs won a razor-thin victory last Tuesday over Lake, a full-throated endorser of the Big Lie — although the former television anchor is refusing to concede.

The Republican Governors Association, a political committee that combines corporate cash with dark money from politically oriented nonprofits that do not disclose their contributors, spent at least $11 million on Lake’s campaign. The RGA is chaired by current Arizona Gov. Doug Ducey, who backed her opponent in the primary. He told CNN in July, “Kari Lake is misleading voters [about the 2020 election] with no evidence.”

After the Jan. 6, 2021, insurrection, many corporations paused their political giving to congressmembers who objected to the certification of the presidential election for Joe Biden. Most resumed their donations to those who voted to overturn the election. Microsoft is one of the companies that kept its finger on the pause button. The software giant also invested in a pro-democracy initiative called Democracy Forward, which supports election security and local journalism in the U.S. and abroad.

However, on Aug. 18, a little more than two weeks after Lake became the nominee for governor, Microsoft donated $150,000 to the RGA. The software giant was not alone in donating to a committee that would go on to support election denying gubernatorial nominees across the country, including Lake. Nor was Microsoft the RGA’s biggest corporate contributor.

Capital & Main reached out to the companies for comment. Only Blue Cross Blue Shield responded by email before publication. “Our commitment is to improve the quality, access and affordability of health care for every American, and we support organizations to help meet that goal,” the statement read. “While we do not agree on every issue or policy position, nor do we direct where our support goes within those organizations, we will continue to support policymakers in both political parties who will work with us to build a more affordable and equitable health care system for the nearly 115 million Blue Cross and Blue Shield members.”

The RGA has also received millions of dollars from Republican megadonors like Robert Bigelow, Miriam Adelson, Richard Uihlein, as well as from the Concord Fund, a dark money group connected to Leonard Leo, who is credited with reshaping the U.S. Supreme Court.

The RGA funneled much of its spending on Lake’s campaign through the Yuma County Republican Central Committee, Axios reported. The political organization’s coordinated campaign with Lake reserved airtime between Sept. 28 and Nov. 8. One of those ads featured a homophobic, far right pastor named Justin Erickson. In the spot, Erickson portrays himself as a small businessman dealing with inflation, which he blames on liberal Democrats. Erickson’s views may rub some of RGA’s donors (and some Arizonans) the wrong way.

In a 2014 sermon on homosexuality, Erickson falsely said that “50 percent of the homosexual LGBT-Now-Q community, 50 percent have AIDS. One in twenty are child molesters, on the sex offender registry,” Mother Jones reported. In a 2016 sermon, he called Islam “satanic,” and Erickson has argued that women should play a subservient role to men.

Evan Vorpahl is senior researcher for True North Research, a nonprofit research firm that tracks the role of money in politics and assisted Capital & Main with the analysis of the campaign filings. In his view, the corporations and right-wing donors are attacking “our democracy and freedoms.” He wrote in an email that “they should be held accountable for the extremism their dollars helped RGA buy.”

It’s not clear that the spending made the difference in an election where voters rejected extremism in close races, according to Arizona-based political strategist Stacy Pearson.

“Despite that spend, Kari Lake still underperformed and underperformed most profoundly with Independents who are just done with crazy rhetoric. They took their tinfoil hats off,” Pearson said. Hobbs’ margin in Arizona, though narrow, was more than 60% larger than Biden’s in 2020.

If corporate cash and dark money could not “outspend Kari Lake’s crazy,” as Pearson argues, it could make more of a difference in low profile, down ballot races like that of the state attorney general. Abe Hamadeh, a former Army Reserve intelligence officer, is a less flamboyant election denier than Lake or Mark Finchem, the failed cowboy hat-wearing candidate for Arizona secretary of state who embraces QAnon conspiracy theories. Hamadeh is in a dead heat with is Democratic rival Kris Mayes, who currently leads by a handful of votes. The attorney general’s office oversees the enforcement of the state’s election laws and is in charge of prosecuting election fraud in the state.

If Hamadeh wins, he will have General Motors, Comcast, Pfizer, Blue Cross Blue Shield and a long list of other corporate donors to thank — as well as the U.S. Chamber of Commerce. They all donated to the Republican Attorneys General Association, another campaign committee that accepts unlimited corporate cash. RAGA contributed about $2.8 million to support Hamadeh’s candidacy, according to OpenSecrets, a nonprofit that tracks money in politics. “Those down ballot races — the more money you put in them, the more attention that you’re going to get, especially with attorney general, secretary of state.” said Doug Wilson, a Democratic campaign strategist based in North Carolina.