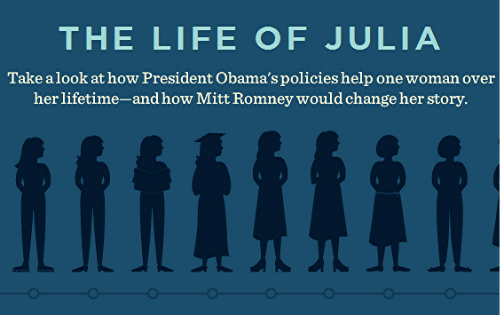 David Brooks, the usually buttoned-down columnist for the New York Times, succumbed recently to a peculiar eruption of Id.  Like many of his fellow conservatives, he’s in a snit about The Life of Julia, an Obama campaign slideshow that portrays the title character benefiting from federal programs like Head Start and Social Security.  (See my previous article here.)  Brooks casts Julia as a “vision of government as national Sugar Daddy, delivering free money and goodies up and down the life cycle.”  My attention was riveted by that term, “Sugar Daddy,” which doesn’t just refer, say, to a rich uncle, but to an older man who showers gifts on a young woman, often, by implication, in return for sexual favors.  It’s difficult to imagine Brooks taking a detour into so dark a recess of the imagination if it had been The Life of James.

You might assume that Brooks’s turn of phrase is an indication of a unique psychology – or psychosis — but in fact the Julia slideshow provokes on the right, broadly, some feverish and frankly contradictory musings on women, welfare and autonomy.  Though more outrageously than others, Brooks simply plays the dominant theme: concern that old-age pensions and federally-subsidized pre-school programs make people weak-willed, dissolute, and dependent.  His colleague Ross Douthat argues, in the same vein, that the Life of Julia’s protagonist “depends on the state” instead of being “self-sufficient.”  So far, so familiar.

But listen to William Bennett.   “Julia,” writes Bennett, “is not your typical all-American girl” – again the implication of degeneracy – “but an obviously independent yuppie liberal woman.” Think that word “independent” is a slip, an inadvertent departure from the program of decrying dependence?  It isn’t.  Bennett takes the idea further, complaining that the slideshow makes “no mention of a father or husband,” a gripe echoed by Jennifer Rubin, who terms Julia “the liberal feminists’ idealized single woman: no husband and utterly dependent on government.”  So is Julia dependent or independent?  Both, in the worried view of these conservatives—and in the wrong ways, too.  For with the government usurping the rightful role of a father or husband, Julia can thumb her nose at marriage.

It would be wrong to think this is “merely” a question of gender bias, columnists failing some sort of public Rorschach test.  (Maybe it’s no coincidence that the silhouettes of Julia on the first page of the slideshow are reminiscent of inkblots.)  In a sense, conservatives are onto something important:  the welfare state is all about issues of autonomy, as well as social justice and fairness.  One of the things a good welfare program does is promote personal autonomy.  A well-designed scheme of health insurance regulation ensures, among other things, that women have access to birth control so that they can manage their lives and careers on their own terms.  Unemployment insurance provides some measure of autonomy from the labor market, freeing people to look for a job that’s fulfilling, or at least comparable to the one they lost.    As Medicare was established and Social Security payments rose dramatically from the 1960s on, poverty among the elderly fell from 35% to 10%.  We might see this as just a matter of income.  But that financial security means an elderly person can avoid reliance on adult children—or the need to appeal to Walmart for a job as a greeter.

So historically, one of the main goals of those fighting the expansion of the welfare state has been to head off such possibilities of autonomy, in order to conserve some facet of the existing social hierarchy.  In the 1930s, southerners insisted on categorical exceptions to Social Security and unemployment insurance so that African-American share croppers and domestic workers would not benefit from them.  For decades, the welfare state was structured so that women could directly get help only from programs that were stingy and prying.  And these are still features of Temporary Aid to Needy Families, which serves an exclusively poor and overwhelmingly female population. So no one should be surprised that these contemporary conservatives are as  tied in knots about Julia’s autonomy as they are about her purported dependence, mistaking a cartoon everywoman for someone else’s mistress.

Related Topics:The Life of Julia
Up Next