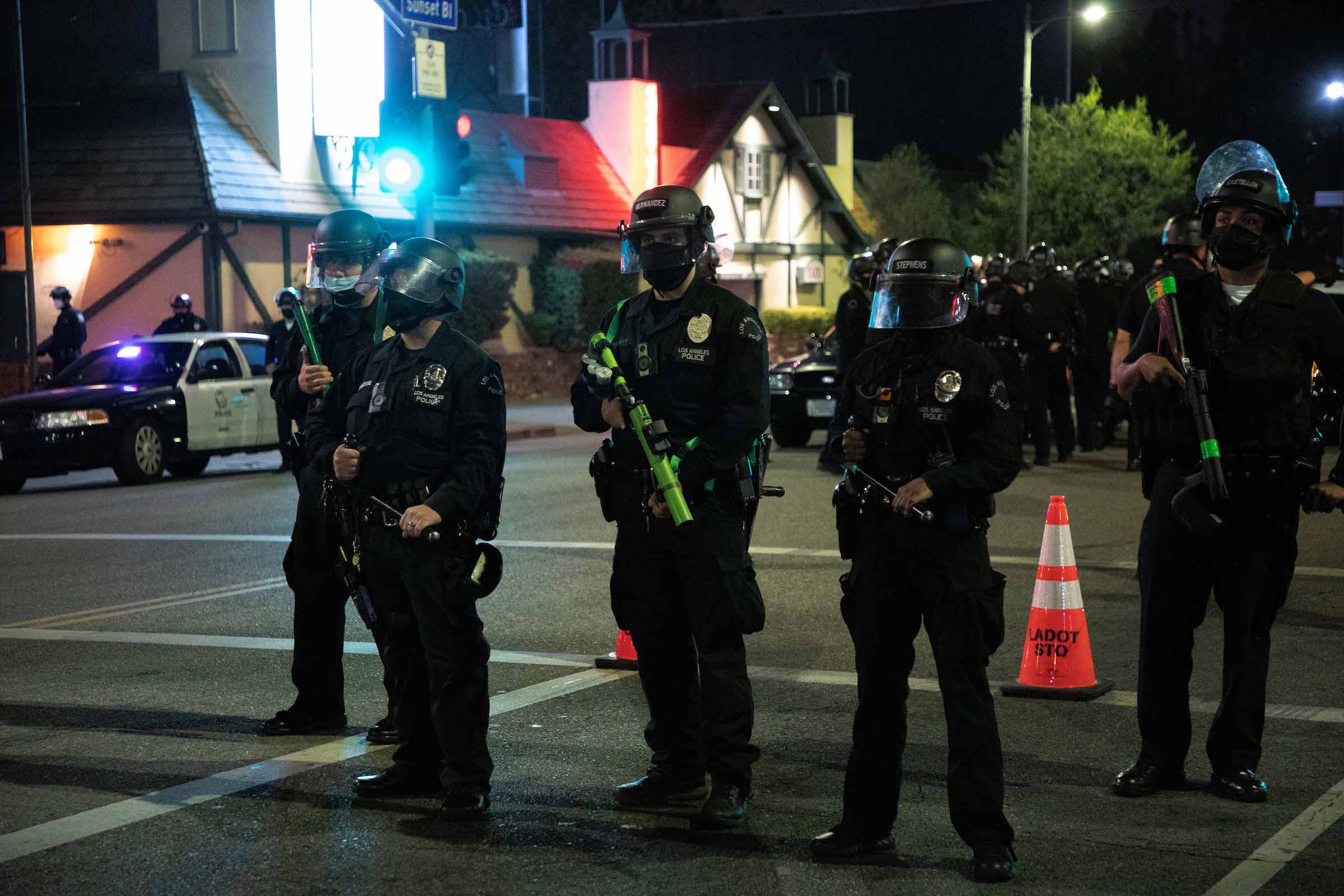 The Los Angeles Police Department must restrict its use of less lethal rounds at protests, a federal judge ruled Monday, approving a request for a temporary restraining order (TRO) against the department.

Only officers properly trained and certified to fire rounds from 37mm and 40mm launchers can do so, U.S. District Judge Consuelo B. Marshall ruled, and only following a verbal dispersal warning. The rounds must only be shot at protesters posing a “threat of serious bodily harm to others,” and 40mm launchers must not “target the head, neck, face, eyes or spine.” Lastly, officers cannot shoot at protesters within five feet.

Prominent civil rights firms filed the TRO request after protesters at the recent Echo Park homeless encampment standoffs had videoed LAPD officers pointing and firing the less lethal firearms at protesters from fewer than five feet away, when the rounds will severely maim, at best, and kill at worst, depending on impact location. Black Lives Matter Los Angeles is a plaintiff.

The TRO application had been expedited to produce a ruling before a verdict in the trial of Derek Chauvin, who was found guilty Tuesday of the murder of George Floyd.

Less lethal ammunition dates back to the 1880s, when Singapore police fired sawed off broom handles into rioting crowds. Colonists brought the practice back to Great Britain nearly a century later, when tens of thousands of rubber and plastic bullets would be fired at Northern Ireland’s Catholics during the Troubles. In Los Angeles, police fire foam-tipped rubber bullets, beanbag rounds —pouches filled with lead shot—and pepper balls, ammunition similar to paintball rounds that discharge chemical irritants.

The March 10, 2021, Chaleff Report, which examined the LAPD’s violent mismanagement of last year’s George Floyd protests, documented abuse of less lethal rounds as well as officers’ lack of training with the weapons. Less lethal rounds are not meant to disperse peaceful protesters, the report underscored; their deployment against peaceful demonstrations is an unconstitutional abuse of the firearm.

Though the LAPD failed to provide internal records of how many less lethal munitions were deployed between May 27 and June 7, the height of last spring’s Floyd protests, “rough inventory records indicated that over 3,500 rounds of 40mm and over 6,200 rounds of 37mm munitions were not returned to the Department armory,” the report’s authors stated, indicating that officers fired the missing rounds at protesters.

Before the new court filings, LAPD Chief Michel Moore said he anticipated the continued use of less lethal rounds at protests, claiming more than 100 officers were injured during the Floyd uprisings.

Apart from the George Floyd demonstrations, Angelenos have become well acquainted with the LAPD’s less lethal arsenal. During the celebrations that followed the Los Angeles Lakers winning the National Basketball Association championship on Oct. 11, police “exploded” the eyeball of a 22-year-old fan with a foam tipped projectile that shattered his eye socket. Another bystander was struck in the mouth with a less lethal round and lost eight teeth.

“While we appreciate the judge’s order, it is not enough,” says Akili, an organizer with Black Lives Matter Los Angeles. “They’ve been ‘trained and certified’ for years—they’re still killing us.”

A spokesperson from the Los Angeles City Attorney’s Office told Capital & Main that it was reviewing the decision and had no comment at the time of this writing. The LAPD forwarded an announcement of the restraining order that it distributed to officers, which explained that the “order identifies a number of restrictions, some of which are consistent with existing Department protocols while others are more restrictive.” Mayor Eric Garcetti’s office did not respond to requests for comment.