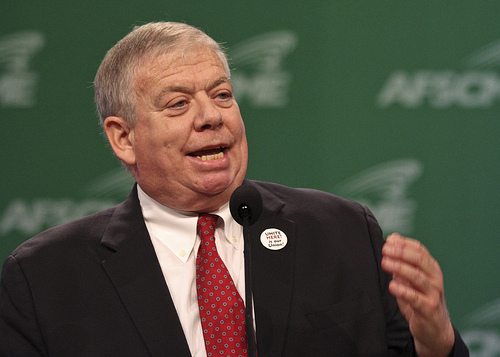 For some time Merle Haggard’s lyrics about vanishing jobs and workmanship have seemed more like a lament than the pep talk they were intended to be:

I wish a Ford and a Chevy
Would still last 10 years
Like they should . . .

When a man could still work, still would.
And are the good times really over for good?

Even with some signs that industry is making a timid return to America, organized labor is struggling to influence political events. The Frying Pan spoke about this on December 8 with UNITE HERE president John Wilhelm, shortly before he introduced honoree DeMaurice Smith, head of the NFL Players Association, at LAANE’s City of Justice Awards Dinner at the Beverly Hilton Hotel.

Wilhelm, whose union represents hospitality workers across North America, has been pushing the labor movement to refocus on organizing workers.  The conversation began with the question of labor’s role in efforts to challenge the current economic order.

John Wilhelm: Labor unions are 20th Century institutions and their number-one job is to adapt to the 21st Century and show people they’re still important. So far they haven’t done that. But I am very optimistic that the demographic tsunami and the overreaching of the corporate class will work in our favor.

Frying Pan: Is it a matter of labor asserting itself during the 2012 elections?

JW: No! Organizing workers should come first because electoral influence flows from stronger unions – not the other way around. And there are opportunities everywhere. Today we heard a report from Pomona College – a supposedly liberal school – that is displaying despicable behavior by throwing up fierce resistance to workers who are trying to organize. Administrators there had sent out letters to workers telling them that their papers didn’t seem to be in order and they could be deported. But students and faculty immediately came to these workers’ defense.

FP: But will organized labor fall back into its default mode of 2008 and throw everything into the re-election of President Obama and Democrats?

FP: Yet even if there isn’t the kind of labor push for Obama as there was in 2008, unions have to have some sort of election strategy.

JW: My personal view – not that of our union – is that we should focus on fighting voter suppression efforts. It’s not that well known, but Texas has recently become a “minority-majority” state. There are two and a half million eligible African American and immigrant voters in Texas. If we could register half of them it would change everything and take Texas away from Republican control for the first time in 20 years. Again, there are opportunities everywhere.

FP: Do you think Obama would fight for passage of the Employee Free Choice Act if he won a second term?

JW: No. We’re not expecting to see anything different in a second term from the first. I mean, I think Obama is a good man, but he’s trapped in the political strictures of Washington.

FP: What message do you have for younger Americans who are upset about the status quo?

JW: My generation fought for civil rights and against the war in Vietnam. People today are telling the Occupiers to be more “pragmatic,” but I say, Do what you’re doing and keep fighting!

FP: Are you happy with the current GOP presidential field?

An American Waiter: Reaching the Tipping Point in L.A.