An ambulance sits parked outside the U.S. Capitol. (Photo by Drew Angerer/Getty Images)

In 2009, Jared Bernstein was among a small group of top advisors to newly inaugurated President Barack Obama and Vice President Joe Biden as they took on the worst economic downturn since the Great Depression. With the nation now facing another economic cataclysm, brought on by the coronavirus crisis, Bernstein has been outspoken in his views about what the federal government should, and should not, do this time around. Currently a senior fellow with the Center on Budget and Policy Priorities (and a member of Capital & Main’s advisory board), Bernstein, who is informally advising the Biden campaign, spoke to Capital & Main on March 23 as Congress continued to debate a massive stimulus package in response to the pandemic. This interview has been edited for length and clarity.

Capital & Main: How would you rate the Trump administration’s response thus far to the economic dislocation that’s been caused by the coronavirus crisis?

Jared Bernstein: I’m afraid I’d give them a very bad grade, something close to failing because there really hasn’t been any substantive relief that’s gone out the door yet to help households and even businesses, and we know for a fact that layoffs are mounting at an alarming rate. And for people who don’t get paid leave — and there’s tens of millions of workers who fit in that category — they are a paycheck or two away from really serious privation. Can you lay out your advice on what the Trump administration should do now?

The first thing is just to have the word urgency foremost in their minds.

Step one is just getting money to households and families who desperately will need it in coming weeks. Step two is making sure that we actually have an economy in place to bounce back to once we contain the virus, and that means supporting businesses who face revenue shutoffs. Such support should come with [the] condition that they help their workers.

You’ve argued that the current version of the bill would give what you and others have called a half-trillion-dollar slush fund to big business. How important is it that Democrats remove or significantly revise this stimulus bill, given the urgency of passing something quickly to help workers and small businesses?

Well, that’s the key. This bill, which is shaping up to be the largest stimulus ever, was actually making good progress until Republicans jammed in this slush fund for big business with almost no strings attached in terms of oversight or underwriting or any conditionality to help workers.

So Democrats have a choice. They can say, “Oh, well, I guess we have to swallow this junk and vote for the bill just to get it out the door.” Or they can say to Republicans, “You absolutely need our votes” – which they do — “Take this piece out and we’ll figure out what to do to help big businesses [which is] really important.” 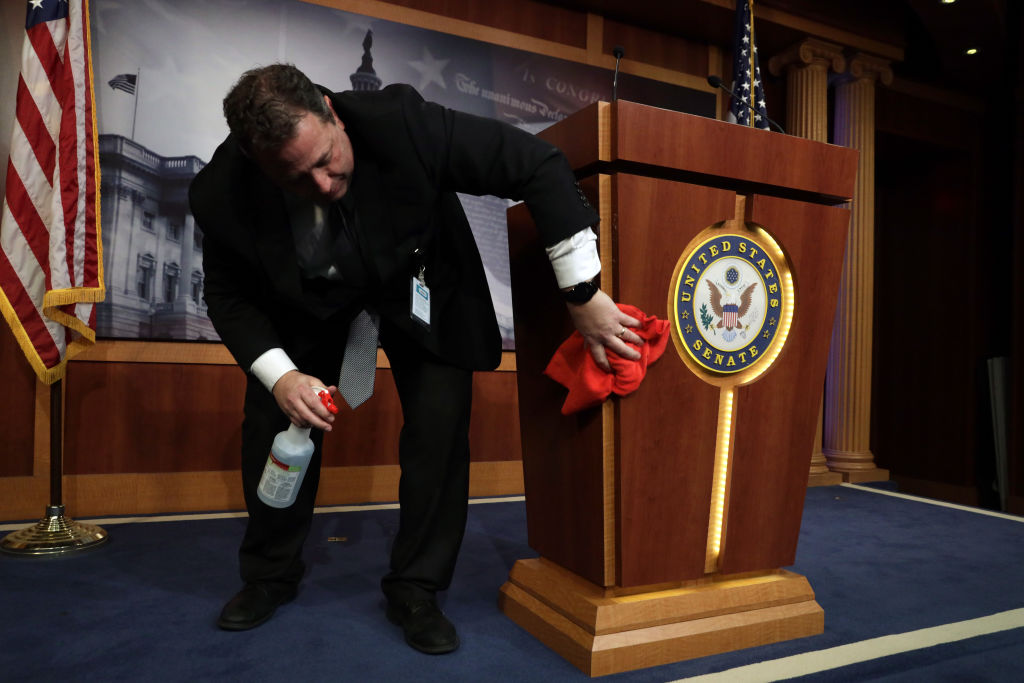 Do you think that permanent paid sick leave or other kinds of requirements should be imposed on any big businesses that receive bailouts so that their policies change not just in the interim, but in the long term?

That’s a tempting direction to go in, but I wouldn’t go there right now. I would keep the word “permanent” out of almost any of these discussions because that suggests a kind of opportunism to use this crisis to try to get things permanently in place. The need to help stave off economic despair and cascading business failures is too strong to have this permanency debate right now.

What about requirements for unemployment and sick leave benefits for gig workers, including the tens of thousands of delivery drivers who are doing the shopping now for millions of Americans?

That’s a really unique problem for people who are not at work. We need to ensure that our programs reach them. For example, unemployment insurance typically does a very incomplete job of reaching anyone who’s self-employed or a gig worker — basically someone who hasn’t worked for a company that’s paid into the unemployment-insurance system. In the past when we’ve ramped up special recession-oriented unemployment coverage, we’ve made allotments for those workers. And we have to do that this time too.

It was initially left out of the Republican bill in the Senate, but [U.S. Senator] Chuck Schumer and his team insisted that such measures be put back in and I hear that they are.

Should Trump use his emergency powers to force industry to produce the ventilators, masks and other protective equipment that doctors and health care providers around the country are saying they desperately need?

It’s not exactly my area of expertise, but the Defense Production Act makes sense in this context. Because one of the really unfortunate aspects of this that we’re discovering relative to some other countries who have dealt much better than us with the virus and with containment is just our health care system’s unpreparedness for the surging demand — whether that’s testing, which I think is the most egregious missing part of the response so far, or the fact that absent enough ventilators, hospitals are going to have to triage in life-and-death situations.

It seems like the only reason not to do it is a hardcore free-market ideology that says in America we don’t force companies to produce things they don’t want to produce.

A couple of weeks ago Republicans were yelling “Socialism!” any time they saw a progressive idea they didn’t like. Now they want to spend trillions bailing out businesses. So in Washington we say that the definition of a Keynesian is “a Republican in a recession.” Obviously putting aside ideology makes sense.

I’m not sure how I feel about this metaphor, but you’ll hear policy makers talking about this as if it’s a war. Well, certainly in a war you have a Defense Production Act precisely for meeting those kinds of demands. I guess the way an economist would talk about it is as a massive market failure. And even in classical or mainstream economics, there is a very well-defined role for government intervention when markets fail.

The American Prospect’s Robert Kuttner has called for a massive public investment on the scale of what happened during World War II. Do you agree with that idea?

Yes, I definitely think that that would make sense, but I view that as a down-the-road piece. The first tranche of stimulus to get out the door can’t be infrastructure. It has to be direct payments to households and businesses. Infrastructure, even if you do it quickly, takes a while to get started, and as long as people are quarantined, it’s sort of hard to figure out how that works.

There will be pent-up demand, and that will help — conferences that were canceled will get rescheduled, vacations or trips to restaurants and stuff.

People will recall that it really was the Great Depression and FDR’s response to it that birthed much of the system of social provision and safety net, investments, public goods and anti-poverty programs. Many of the things we’re talking about today, including unemployment insurance, came as a result of a country that was ill-prepared for a market failure of that magnitude.

Are there any lessons from the steps that were taken by Obama’s team in 2009, including by you, during that dark time that we can apply to the current situation? Both the things that worked and things that didn’t?

In terms of things that worked, I thought we did a good job of getting relief that was quite substantial at the time out the door quickly. But in terms of “micro,” for people’s lives, it took too long for them to begin to recover.

So I think you have to be much more targeted in directly helping the folks that need it. Back then, we did about a third of the stimulus in tax cuts and that can be helpful to some people. But, especially given the nature of the current shock, I think we need to provide more direct help in just sending cash to households regardless of whether they have a tax liability to make sure we hit low-income people.

One of the reasons for the Great Recession was a freeze in credit markets. So we did a lot to keep the credit markets flowing, which meant providing a lot of resources and bailouts to banks. And I don’t think we imposed enough conditionality on that. We didn’t ask for enough in return. I think the view was, these institutions are fragile, you can’t ask for too much back. But I think they weren’t nearly that fragile.

How would Joe Biden, the Democratic Party’s presumptive presidential nominee, handle a situation like this?

I worked side by side with the vice president in implementing the Recovery Act, the big Keynesian stimulus to offset the Great Recession. He is widely credited as having done an excellent job. Very, very few elements of that program didn’t do what they were supposed to do. We can have arguments about whether they did enough, but the implementation went well, and that had a lot to do with Biden, who really worked hard on that. I literally remember him getting mayors from small towns on the phone who couldn’t believe that they were talking to the vice president, who was insisting that they do what they were supposed to do with their fiscal relief checks.

So he is way more battle-tested than any incumbent I can think of when it comes to recessionary kinds of programs.