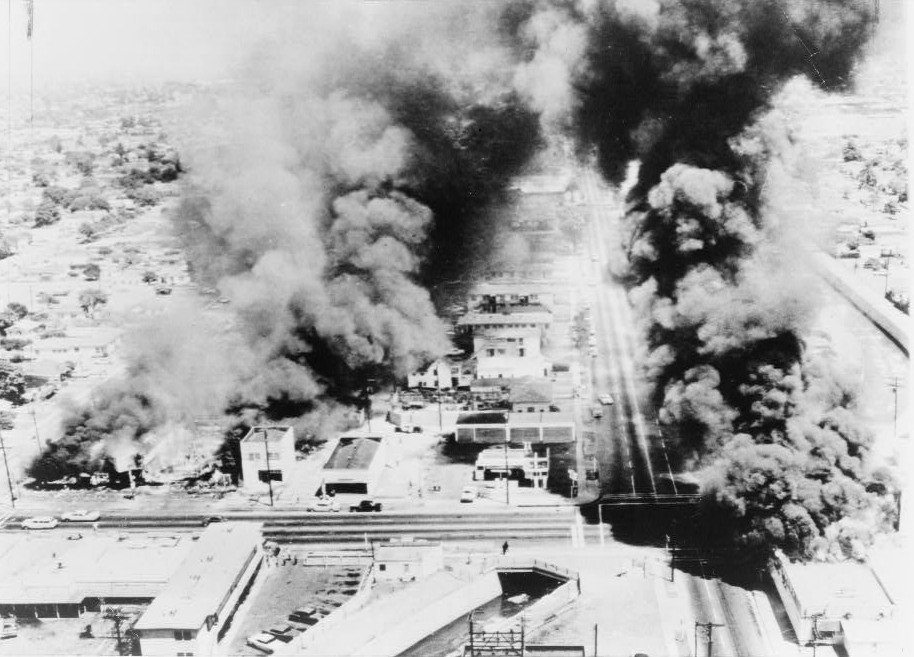 James Donaldson organized supply trucks that brought essentials from his Valley church to Watts during the 1965 riots.

Some of the wealthiest, most famous and most powerful figures in the world call Los Angeles their home. No one would mistake James Donaldson for one of those. Sam Keen, the author and writer for Psychology Today, once told me that Donaldson was the only person he ever knew who became a social worker because he needed the money. But when Donaldson shaped this city – and changed my life – social work was still in his distant future.

James Donaldson came to Los Angeles from the publishing world to be Theologian-in-Residence at a mainline church in Woodland Hills, when that was the western edge of the suburbs. A seminary graduate from Texas, he involved his affluent congregation in reflection using the tools of the culture – films, museums, books. And he connected the suburbanites to an African-American church in South Los Angeles.

During the curfew that followed the Watts Riots in 1965, the link between those two churches became a pipeline of survival. Short on water, food, diapers and other goods people needed to live, the Valley church filled a truck every day and delivered these staples into South Los Angeles. It changed the lives of those people – especially the ones in the truck.

It also led to the next change in Donaldson’s Los Angeles sojourn. Following those social upheavals, the National Council of Churches’ Commission on Religion and Race put money into Los Angeles to empower the black community through a network of congregations. There are several of those networks now, but none then. The Corridor Ministry took its name from the swath of jet noise from the flight path into Los Angeles International Airport. The Corridor started at what was then the eastern segregation line of Alameda Street and moved west across South Los Angeles to the mostly-all-white, but already changing, Inglewood.

Donaldson used his energy, intelligence and charisma to organize a hundred congregations in a short time, packed with intense meetings and several notable successes, including a commitment by the Los Angeles Community College system for a campus in South Los Angeles.

During both his Valley and South Los Angeles time, he recruited participants for a series of weekend theological trainings run by the Chicago-based Ecumenical Institute. The workshops aimed to radicalize clergy and church people. I am sure I met Donaldson during that time, but he came after me one day in Claremont, where I was a seminary student. Because we were exempt from the Selective Service, he wanted us to support draft resisters at the downtown Los Angeles induction center. We did.

Then as I began an internship year in the city, he asked me for more. Donaldson had shifted gears again, forming a branch of New Adult Community in Los Angeles and orchestrating its signature event, the Urban Plunge. New Adult Communities were a national network of experiments by major denominations to connect with the emerging youth culture. The Urban Plunge, created by people in Chicago, immersed college youth and suburban church people in the urban scene. Donaldson asked me to coordinate the logistics of a Plunge here.

So I did. Eighteen months in a row. Over a weekend, the Plunge took 100-some participants at a time from an urban church basement to the bars and peep shows of old Main Street and Hollywood, to the Black Congress in South L.A. and to meet with Brown Berets in East L.A., then to church with a rock band (unheard of in those days) and dancing on the pews (still unheard of). Not much on sleep, it mirrored the intensity of the late 1960s itself.

The Plunge became an organizing tool, which led to communal living experiments, participation in war protests, efforts to stop the nuclear power plant at San Onofre, leafleting grocery stores for the farm workers, and a white presence on the street during the Black Panthers/LAPD shootout. Meanwhile Donaldson assisted draft card burnings on college campuses and helped smuggle draft resistors into Canada.

Then it was over. Donaldson headed “back to the land” as people said in those days. The man who told me I was intelligent and taught me to read books – not just for grades but for the meaning they gave my life – and who shoved me into leading, walked out of my life for two decades. First to Glorieta, New Mexico, then to Twisp, Washington.

That’s it. No fame or fortune or power. On January 7, he died – a retired social worker, yes, but a theologian, activist and organizer to the end – surrounded by friends who joined him in caring for the earth and one another.

Sometime back, maybe a decade, a hundred or so mostly-white clergy were packed into a room at one of the union halls in Los Angeles. The facilitator asked us to introduce ourselves and say how we experienced our political awakening as faith leaders. One by one it became apparent that for most of us of a certain age in that room, it was the work of James Donaldson that had formed our lives through one project or another. He lived here a brief time, but he left a long legacy.

Related Topics:Op-Edreligious activism
Up Next

Taking the Train to the Women’s March: A Transformative Moment