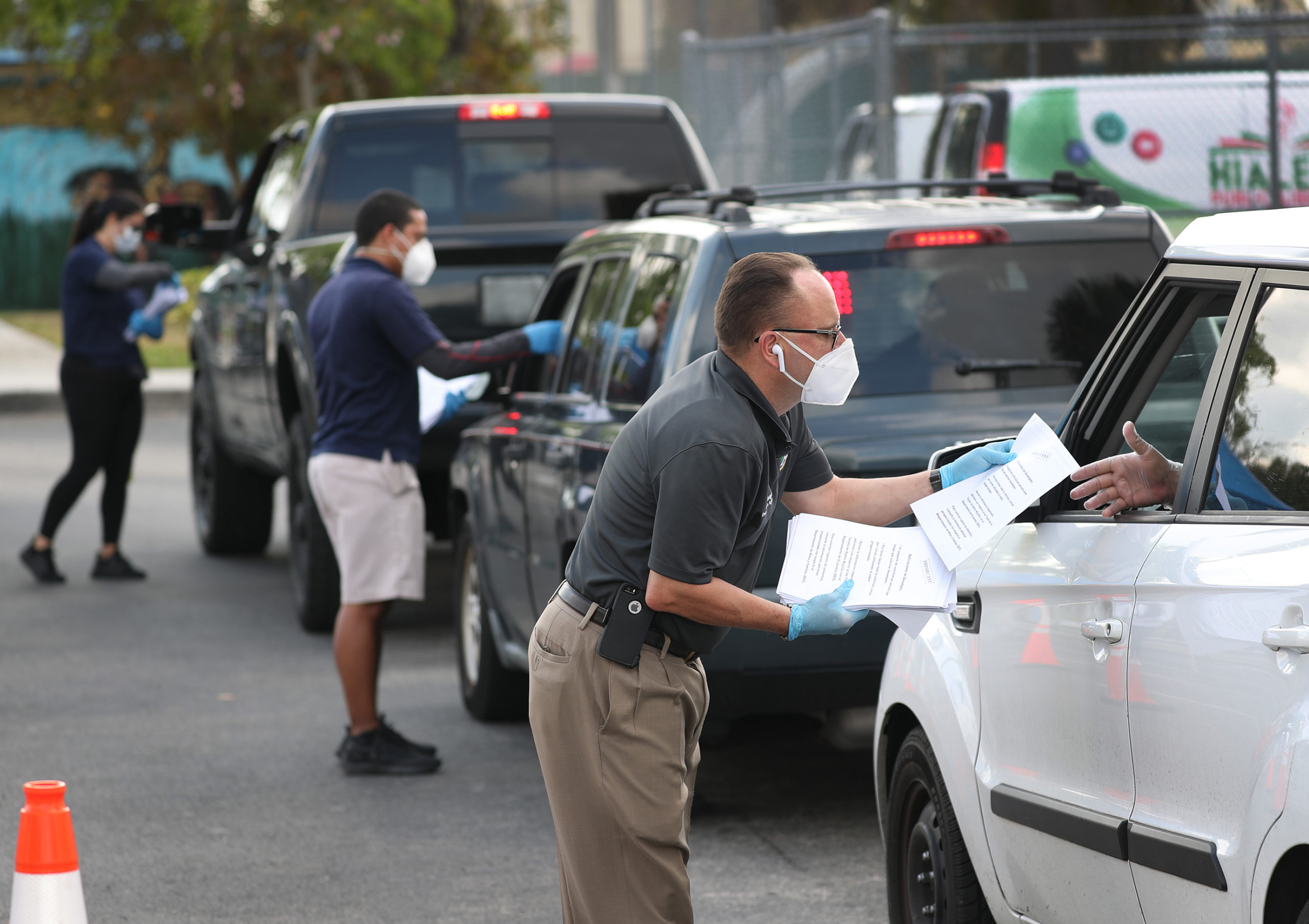 With the COVID-19 pandemic accelerating in March, Congress scrambled to design a more than $2 trillion economic package that would prop up private companies, keep the financial system liquid, and, at the same time, provide financial help to individuals whose income was evaporating as the result of states issuing stay-at-home orders and temporarily shuttering nonessential businesses.

There are two pillars to the effort to help individuals. The first, a massively expanded unemployment insurance system, would bring in freelancers and others traditionally left out of the insurance system, while also temporarily increasing, by $600 a week, the amount that the government would pay out to claimants. The second is a direct income supplement, a one-time check issued by the U.S. Treasury for $1,200 to each taxpayer whose recent tax filings show they earn below $75,000; individuals earning between $75,000 and $99,000 will receive checks for smaller amounts. For couples, the checks and the respective income limits are double these numbers. And families will receive an additional $500 per child.

These changes are huge, but some politicians, at both the federal level and in California, have urged even more aggressive financial interventions. Back in early March, Mitt Romney called for $1,000 one-time payments to be sent to every adult, regardless of income. Alexandra Ocasio-Cortez has urged Congress to pass universal basic income (UBI) legislation that would result in regularly scheduled, rather than one-off, cash transfers to individuals. And California Congressman Ro Khanna and Ohio Congressman Tim Ryan have proposed using the Earned Income Tax Credit as a mechanism to channel payments of up to $6,000 to lower-income families.

Groundwork for the political pivot toward a universal basic income was laid months ago, before the COVID-19 pandemic.

At a state level, Assemblyman Evan Low, who represents the Silicon Valley region, has proposed Assembly Bill 2712, which would create a California version of the UBI. There is precedent for this in California; over the past year, the city of Stockton, under Mayor Michael Tubbs, has run a UBI pilot program, in which 125 low-income residents are given $500 a month to spend as they see fit. Preliminary data, analyzed by researchers, suggest residents are spending the money responsibly, to help cover basic bills and buy sufficient food for their families. The data also indicate that recipients are no less likely to look for higher paying work; in other words, despite the fears of critics, the monetary supplements don’t dissuade people from seeking longer-term financial solutions to meet their needs.

The groundwork for the political pivot toward a universal basic income was laid months ago, before the COVID-19 pandemic took off and transformed the global economic landscape.

During the Democratic Party’s presidential primaries, Andrew Yang pushed an ambitious version of UBI that would set up a permanent system for paying every American adult $1,000 per month. The idea, which has circulated among some progressive economists and social thinkers for decades, is simple: In a high-tech era, much of the productive capacity of the economy can hum along with only a small workforce to monitor and fine-tune an increasingly automated system. While that allows for huge innovative leaps and increases in overall productivity and efficiency, it risks generating high levels of long-term unemployment, which, in turn, could impoverish much of the population and drive down its ability to purchase consumer goods. Absent creative government intervention, automation could begin a downward spiral that ultimately undermines the very consumption-based economy it was intended to improve.

Ideas that not long ago seemed naively utopian are now part of the mainstream political debate.

Yang – like Martin Luther King Jr. in the 1960s, as well as the conservative economist Milton Friedman – argued that one possible solution would be to use some of the surplus income generated by these hyperefficient production systems and channel it back, via a government-run income-subsidy program, to every adult member of the community. This would guarantee that no American fell below a certain income floor, while at the same time greasing the wheels of the economy.

It was a proposal calculated to trigger interest in the high-tech community, which largely drives automation technology and also is acutely aware of the potential economic impacts. Soon, a group of Silicon Valley researchers, Y Combinator Research, proposed a five-year randomized study with UBI recipients across two states, with panels of economists, public health and government specialists analyzing the data the study would generate.

Yang’s proposal was regarded by most pundits and economists as a gimmick, one both eccentric and dangerously unachievable.

A lot has changed, however, in the months since the entrepreneur dropped out of the presidential race, and ideas that not long ago seemed naively utopian are now part of the mainstream political debate. “I don’t know what California will do,” says University of California, Davis, economics professor and director of the Center for Poverty Research Marianne Page. But, she adds, “The governor is thinking big and thinking progressively.”

“A real UBI that is not means-tested is more expensive than Social Security, Medicare put together.”

In a time of stay-in-place orders that have shuttered much of the global economy, unemployment has soared in America to levels not seen since the Great Depression. Now, politicians are desperately searching for ways to prop up the economy, even as we see enforced closings of workplaces.

“It is doable, and it is being talked about in California,” says Chris Hoene, Sacramento-based executive director of the California Budget and Policy Center, referring to the possibility that California will legislate some form of basic income guarantee. “You could literally mimic the federal rebate program and give checks to households based on income and whether people have children. California could do it through its EITC [which was enacted in 2015] and existing child tax credit. This is the first recession [the California EITC] has been in place for. So we now have a lever in place that we didn’t have before. The California EITC Coalition is certainly talking about it; some think of it as a basic income policy, some as a cash assistance policy.”

Hoene’s interest in using the EITC more assertively dates back to the early months of the Trump presidency, when he and some of his colleagues at the center researched ways to counter the impact of cuts in federal social safety net spending that the new administration was pushing. Their report, published in November 2017, noted that, while a true UBI would be prohibitively expensive, “Limiting the benefit further, to all individuals living in households with incomes below $25,600 (the bottom fifth of household income in 2015) would cost around $7.0 billion each year.” Focusing on low-income households in the bottom quintile, instead of individuals, and providing each qualified household with $1,200 annually would lower the cost to $3.1 billion, the CBPC researchers estimated — “still expensive, but far more realistic.”

After all, California’s budget is enormous. Even with the current implosion of tax revenues, it remains a $200 billion per year beast, giving it more heft than the budgets of most countries. In that context, a targeted expansion of the EITC, especially during a period of stay-in-place measures, is both doable and a good use of fiscal resources.

“A true UBI is enormously expensive,” Page cautions. “A real UBI that is not means-tested is more expensive than Social Security, Medicare, all those things put together.” But, she continues, that doesn’t mean California can’t adopt a more targeted method to assist residents, such as adding its own top-up dollars to the $1,200 federal checks, to reflect the state’s higher cost of living; and to use its existing Cal-Fresh and Medi-Cal rolls and databases to target additional financial help to low-income residents. “We might be able to use the [existing] infrastructure as a mechanism that would help us deliver cash.”

With up to four million Californians expected to have temporarily lost their jobs by May, any and all methods to support residents must be considered. Call it UBI or call it income assistance, it seems inevitable that, as we navigate through the pandemic, some sort of months-long income supplement programs will have to be enacted here.

Can Workers Organize in the Deep South During the Pandemic?

Health Care Expert: Post-Virus Future May Not Be Bright