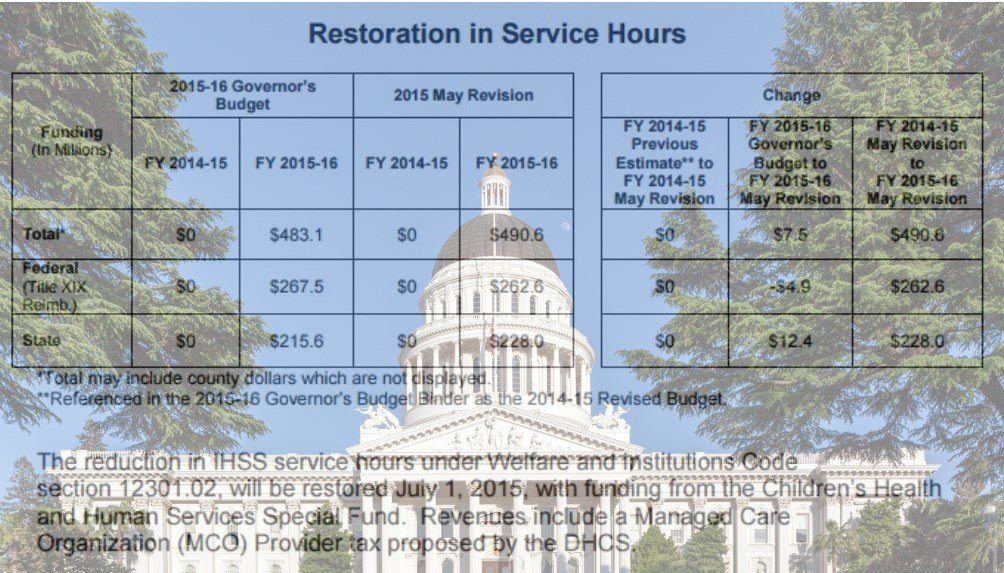 The 467,000 Californians who receive assistance from the state’s In-Home Supportive Services are breathing a little better, if not easier, now that a new budget has restored care cuts to the agency. The program typically assists elderly, blind and disabled people on low incomes with housework, meal preparation, personal hygiene and other services; by paying individuals through the state to perform these tasks, the care recipients are able to remain in their homes and avoid being institutionalized – which also saves taxpayers millions of dollars.

A few years ago IHSS suffered a seven-percent funding cut that Governor Jerry Brown pledged in January to restore – but without providing a specific funding stream to do so. Brown suggested that revenue for the restoration could come from either a new tax on certain health care plans or from the state’s General Fund.  Officials with the state’s Department of Social Services, along with IHSS advocates in both the state Senate and Assembly, assured the agency’s clients that it was a done deal that the seven percent cut would be funded, somehow.

IHSS aid recipients and their care providers were not entirely sold on “somehow” funding.

But IHSS clients, and the workers who provide their care for $9.65 an hour, were not entirely sold on “somehow,” and waged a vigorous campaign in the Capitol for the restoration. Governor Brown, after all, had a track record of denying IHSS workers paid overtime, as well as paid sick leave, and his nonchalant attitude toward making legislators grapple with exactly how to find the estimated $226  million needed to restore the cuts did not allay fears that IHSS would once more be the odd man out in the final budget settlement.

By the legally mandated June 15 deadline, however, the Legislature passed a budget that would ensure restoration of the seven-percent cut – for one year. The final budget agreed to by Brown slashed $2 billion of spending for other programs, but left the IHSS restoration intact.

A permanent fix will depend on Sacramento enacting a new managed-care tax. While unions representing the IHSS workers rejoiced over the news, they made it clear that more work lies ahead to obtain a lasting solution.

The inability of the Legislature and Governor to iron out such a long-term solution today might be understandable on the federal level, where the Republican-controlled Congress is locked in neverending combat with a Democratic President. But why this should be in California, where a liberal party and a chief executive call all the legislative shots, remains a mystery. Or perhaps not. Individuals familiar with the Governor’s views on IHSS, and who wish to remain anonymous, have told Capital & Main that Brown is philosophically opposed to paying family members to care for close relatives. In fact, Brown’s administration proposed in 2011 and 2012 to eliminate IHSS services for people who live with family members.

For their part legislators are quite happy, as political writer Anthony York observed on KQED’s California Politics podcast, to appear as the “good cop” who expands social services – knowing full well that it’s penny-pinching “bad cop” Jerry Brown who will chop these programs once he gets their version of the budget. The end result has left the most vulnerable Californians uncertain about their future, even as a “silver tsunami” of retirees is being forecast to arrive within the next five years, creating even greater urgency for a solution that extends beyond the next budget cycle.

'Clocking In' for Equality

Fathers and Sons and Daughters: Father’s Day at the Wilshire Grand