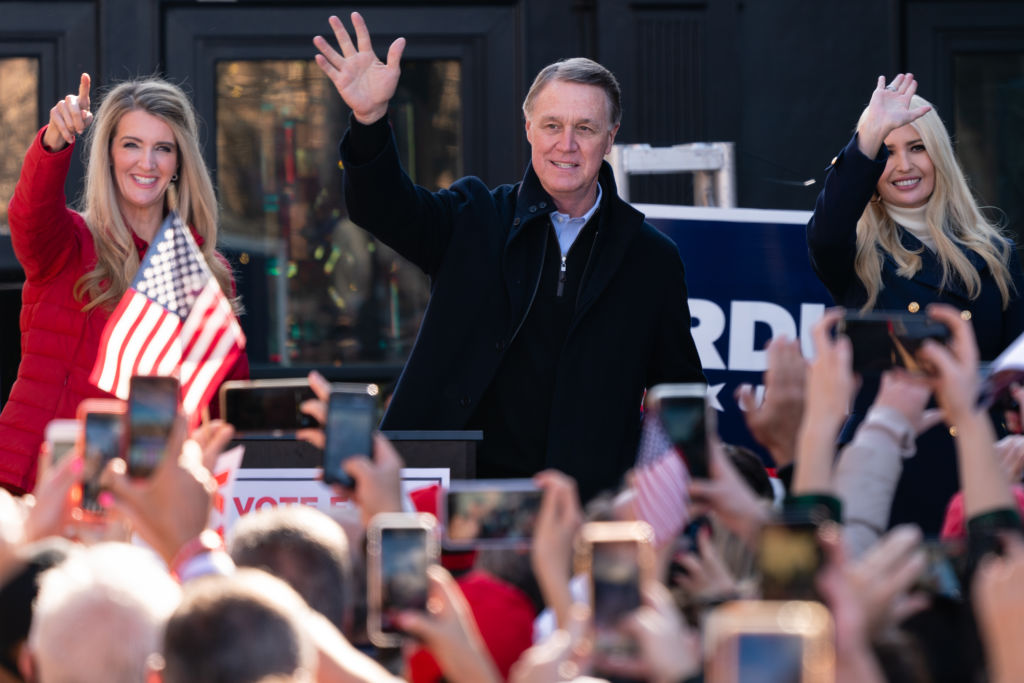 On a recent Monday, Tammy Greer drove to a recreation center near her home in Atlanta to cast an early vote in the runoff elections that will determine who represents Georgia in the United States Senate. Not sure what to expect, she was pleased to find the parking lot full. It took her about 15 minutes longer than normal to vote. And when she was finished, Greer says, she sat in the parking lot for another hour and a half, just watching people stream in and out. It warmed her political scientist’s heart.

“I think there is starting to be an understanding that if you want the incoming administration to hit any of the things that you say you want, you need Congress,” says Greer, an assistant professor in the Department of Political Science at Clark Atlanta University.

Georgia has already played a central role in the political story of 2020, pledging its 16 electoral votes to a Democratic candidate for president for the first time in nearly 30 years and helping to secure the presidency for Joe Biden. With the Senate runoff elections scheduled to conclude next month, the state’s voters are in a consequential position yet again. The outcome of the election will determine the makeup of the Senate and thus the likelihood that a Democratic Party policy agenda can be enacted.

On Jan. 5th, incumbent Sens. David Perdue and Kelly Loeffler, both Republicans, will face Democratic challengers Raphael Warnock and Jon Ossoff. If either of the incumbents wins, the GOP will retain control of the Senate, but if both Democrats win, the partisan split will be an even 50-50, with Vice President-elect Kamala Harris playing the role of tiebreaker.

By many measures, Georgia voters appear to be embracing the gravity of their role. Almost 70,000 new voters have registered since the general election in November, and early voting is outpacing previous runoff elections and almost keeping pace with the presidential turnout, according to reports. And while the outcome will have big implications for national politics, it could also have a concrete impact on policy issues that affect Georgians’ incomes and access to health care, and the state’s ability to recover from the COVID-19 pandemic.

Georgia has the lowest state minimum wage in the U.S., at $5.15 an hour

Of the state’s two incumbent senators, Perdue has the longer legislative record. He is a former business executive and CEO of the Dollar General retail chain who was elected to the Senate in 2014. Loeffler is a former finance executive who was appointed to the Senate at the end of 2019 by Georgia Gov. Brian Kemp, after former Sen. Johnny Isakson resigned for health reasons. Both Perdue and Loeffler, who are among the wealthiest people in Congress (Loeffler is reportedly the richest), came under fire earlier in the year for stock trades that appeared to show they were profiting from insider knowledge about the pandemic. Both claim to have been cleared of wrongdoing. Still, many Georgians are inspired to vote because they don’t believe their wealthy representatives have their best interests in mind, says Francys Johnson, a civil rights attorney and board chairman for the New Georgia Project, the voter-registration initiative that was previously led by former Georgia State Representative and gubernatorial candidate Stacey Abrams.

“They see the rank contradictions right in front of their face,” Johnson says.

At 13.3% Georgia’s poverty rate is higher than the national average of 10.5%. And there are stark differences in economic conditions between urban and rural areas that have played out in state employment trends over the last several years. According to a report from the Center for State and Local Finance at Georgia State University, urban areas were home to some 78% of the state’s jobs in 2017, with more than half of all jobs located in the Atlanta region alone. Between 2014 and 2017, a period of growth following the recession that began in 2008, Atlanta added proportionally more jobs than other cities and rural areas, according to the report. Georgia’s rural areas lost more than 20,000 jobs in the mid-wage category ($35,000 to $54,000) between 2007 and 2017.

The fast-growing Atlanta region added almost as many low-wage jobs (180,000) as it did mid-wage and premium-wage jobs combined (194,000) between 2013 and 2018, according to the Atlanta Regional Commission. And the region’s wages have lagged behind the U.S. as a whole, in contrast with the decades prior to the Great Recession when Atlanta’s average earnings outpaced the national average, according to the commission. The new Congress could influence those trends, depending on how it decides to intervene in economic issues.

Georgia has the lowest state minimum wage in the U.S., at $5.15 an hour, more than 25% lower than the federal minimum wage of $7.25 an hour. A 2014 report from the Georgia Budget & Policy Institute (GBPI) concluded that raising the minimum wage to $10.10 an hour would lift wages for nearly 1 million Georgia workers, including “older, educated and full-time workers, not just part-time teenagers as detractors suggest.” Since then, the Democratic Party Platform has been amended to call for an increase of the federal minimum wage to $15 an hour. A 2016 Atlanta Journal-Constitution poll found that a majority of Georgians supported a $15 minimum wage, and a more recent Pew survey found two-thirds of Americans support the increase.

Meanwhile, David Perdue has said that he does not support increasing the minimum wage. And because of his votes on finance, health care, and labor bills during his time in the Senate, the AFL-CIO has ranked him below even the average Senate Republican in terms of support for legislation that benefits typical workers. Loeffler has no recorded position on the minimum wage, but she has touted her lockstep support of President Trump, whose appointments to the National Labor Relations Board have made a series of decisions that are broadly opposed by labor advocates.

Johnson says he believes that Georgia voters are going to elect both Democrats to the Senate in January. But he acknowledges that the Democratic Party has betrayed some Georgians’ interests in recent years as well. (The Democratic and Republican parties of Georgia did not respond to multiple requests for interviews.)

“They overlooked the need for critical infrastructure investments in rural America, and they abandoned trying to go after disenfranchised voters in the urban core,” Johnson says.

Georgia lags behind the U.S. in terms of access to health care as well, with one of the highest rates of uninsured residents in the country. It is one of 12 states that have so far declined the expansion of Medicaid made possible by the Affordable Care Act. It has the worst maternal mortality rate in the U.S., with much worse rates among Black women than white women. And again there are disparities in access to care between urban and rural areas.

Georgia lags behind the U.S. in terms of access to health care, with one of the highest rates of uninsured residents in the country.

Perdue has repeatedly voted to repeal or shrink the scope of the Affordable Care Act, and Loeffler supports Obamacare repeal as well. That position puts them at odds with most Georgians, according to a 2017 Atlanta Journal-Constitution poll that found large majorities of voters in favor of expanding Medicaid, including 57 percent of Republicans. The cost of insurance is a priority concern for residents all over the state, says Laura Colbert, executive director of Georgians for a Healthy Future, a nonprofit advocacy group based in Atlanta.

“Everyone feels like they’re paying too much for their health care,” Colbert says. “It doesn’t matter if you make $10,000 or $100,000. That’s where we get the most resonance when we talk with consumers.”

Colbert says Georgians for a Healthy Future talked with Perdue earlier in his term, but the group “largely found that the Senator was not receptive to hearing input about how the ACA and Medicaid were important to consumers, and how dismantling both programs would be detrimental to families.”

According to the Bureau of Labor Statistics, the number of unemployed people in Georgia jumped from 161,000 in February to 614,000 in April. It slowly dropped again over the course of the year, before rising again in the fall, and as of November the number of unemployed stood at 296,000 — still almost double the pre-pandemic rate. In April, the Georgia Budget & Policy Institute wrote that the pandemic was disproportionately affecting Black residents, and that expanding Medicaid in the state would “save lives, provide desperately needed coverage to Georgia’s most vulnerable, accelerate economic recovery and stabilize rural health systems.” Over the summer the group urged Perdue and Loeffler to vote for the HEROES Act, a stimulus package approved in the House of Representatives. (The Senate has yet to vote on the legislation.)

In December, as Congress was on the verge of approving an alternative $900 billion COVID-19 relief package, GBPI President and CEO Taifa Smith Butler released a statement urging Perdue and Loeffler to vote for the bill, while acknowledging that “it does not come close to addressing the havoc COVID-19 has already wreaked, nor the problems that are still to arise.”

Colbert says that expanding insurance coverage, and reducing its cost, would reduce both health and economic disparities in Georgia and put the state on a better footing for an economic recovery. And if Georgians want the next Congress to do something about that, “They should consider voting,” she says.

“Voting is kind of the easiest way to express what you want from your elected officials,” Colbert says. “So it’s really important, if people want the health system to change, to go to the polls and vote.”

Happy New Year, L.A.–Could Your COVID Obituary Be Next?