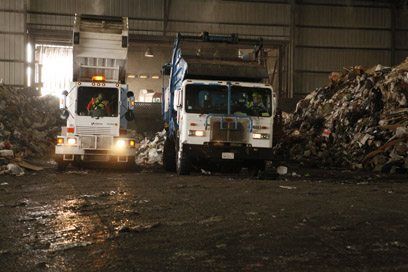 When you compare big business’ rationale for opposing an exclusive commercial waste franchise system with the proposal they’re pushing for now, the two are hard to distinguish.

Don’t Waste LA is calling for an exclusive franchise system to serve our businesses and apartment complexes, consistent with the path taken by 55 other Los Angeles and Orange County cities, along with San Francisco, San Jose, Oakland, Seattle and countless cities up and down the state. The coalition joins the City’s Bureau of Sanitation, the environmental community, waste experts and high-road haulers in arguing that exclusive systems are the only legitimate path for the city to reach its Zero Waste, clean air, job and health and safety goals.

On the other side, Angelenos for a Clean Environment (ACE), as pure an embodiment of “astro-turf” advocacy as has ever been seen in L.A., is a coalition organized by business lobbyist Cerrell Associates, the L.A. Chamber of Commerce, VICA (the Valley Chamber), and the L.A. County Disposal Association – some of the truly stalwart environmental stewards of our city. (Cerrell actually lobbied against L.A.’s plastic bag ban).

With a myopic fervor rarely seen outside of a Tea Party rally, they have anchored their opposition on the claim that an exclusive franchise system will increase customer rates: Then, jobs will be lost, small businesses will die, the L.A. economy will quiver on its last leg…and finally, the sky will fall. Alternatively, they have glommed onto a report from the City Administrative Office (CAO) calling for a non-exclusive system that would increase fees on waste haulers by as much as 150 percent starting in 2013, without any rate-payer protections.

Two big problems with those claims and that proposal:

As a starter, no matter how many times they say it, it is simply not true that rates go up in exclusive franchise systems. The state’s foremost waste consultant, HF&H Consultants, has found that the median cost of service in exclusive and non-exclusive systems in L.A. County is virtually identical. Even more tellingly, in a report released on Monday, September 24, Don’t Waste LA showed that commercial customer rates in L.A. County exclusive franchise cities stayed basically flat over the past decade – even while fuel, landfilling and equipment costs exploded.

This is basic economics: Haulers realize substantial economies of scale and efficiencies – and they can spread their costs over time – in these valuable long-term contracts, savings that can be passed along to customers; as importantly, in exclusive franchises, the rates get locked into long-term contracts.

Second, the non-exclusive plan recommended by the CAO, and supported by ACE and the Chamber of Commerce, will send customer rates through the roof. This is particularly true for small businesses and small landlords – and again, it’s basic economics. The CAO is calling for up to a 150 percent increase in hauler fees, beginning in the first quarter of 2013. Haulers will not pay this out of the goodness of their hearts – they will pass it on to customers.

What’s more, while the haulers may try to get big businesses – like, for example, members of the Chamber – to help carry that burden, they’ll most certainly be rebuffed (you can see it: “What? We just financed a lobbying campaign to protect our status quo. We’re not paying higher rates!”). Instead, it would most certainly be small businesses and small landlords that would carry that burden.

So, what is it Chamber, ACE, VICA?

Do you really care about rates for all Angelenos…or is this just about your big business members – the ones with the negotiating leverage to reject higher fees?

Or, maybe you just don’t understand the economics?