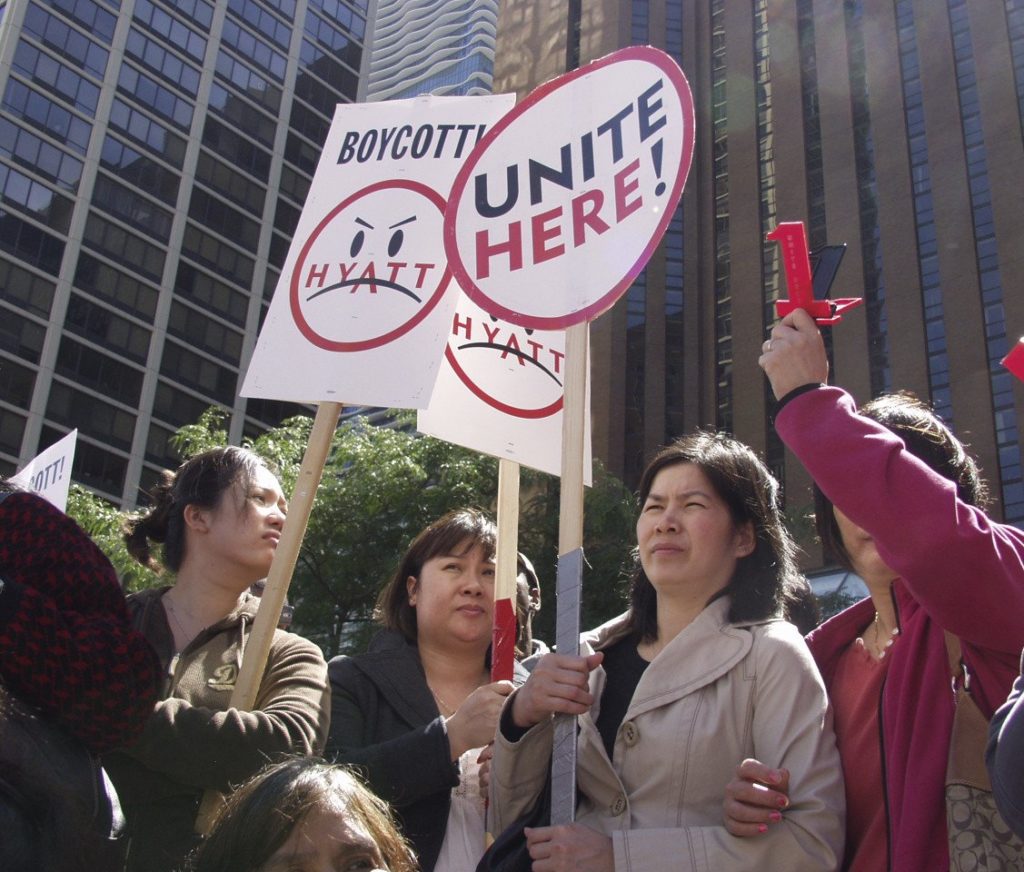 Today a global boycott of Hyatt Hotels was declared. As a server at the Hyatt Andaz in West Hollywood, not only do I personally condone it, but I also urge all my friends, family and online contacts to join me in voting Hyatt the worst hotel employer in America.

This is the first time in history that there has ever been a global boycott of a hotel chain, and I believe it is well deserved.

My personal journey to this decision started last September during our seven-day strike in front of the Andaz on Sunset Boulevard, where my coworkers and I were in a battle for decent wages and a fair tipping policy. A lot of us frankly were tired of working three or four different jobs while only getting paid for one.

I hadn’t yet heard of some of the stories from different Hyatt hotels across the country – like the one about Hyatt firing its entire housekeeping staff in Boston and replacing them with minimum-wage temp workers. Or the story about the picketing hotel workers at the Park Hyatt Chicago, who had heating lamps turned on them by management during one of the hottest days of summer. Apparently when you rally against Hyatt, you roast.

More recently a Hyatt hotel in Santa Clara fired two sisters after one of the women tore down digitally altered photos of themselves wearing bikinis. These photos were posted in the break room for all to see, humiliating the sisters.

A Grand Hyatt in San Francisco thought it was okay to demand that a dishwasher return to work three days after having a C-section. When the woman refused, Hyatt tried to fire her.

And back at my hotel, the Hyatt Andaz West Hollywood, one of our housekeepers recently asked for time off to see her brother, who was gravely ill in a hospital in Mexico. Hyatt refused her request and she never got to say goodbye to her brother.

This woman is a co-worker of mine and I can only imagine the heartbreak she has been going through.

It’s not just the innumerable personal stories that have been drawing the attention of the press, however. The federal government recently issued a letter to Hyatt warning the company of the dangers that housekeepers face on the job. Apparently this is also a first within the hotel industry, and yet in 2011 Hyatt took the lead in lobbying against legislation in California to make housekeeping work safer for employees. Can somebody explain to me how that’s not lobbying for unsafe working conditions?

Maybe this is not all that surprising considering the study published in The American Journal of Industrial Medicine in 2010, which examined 50 hotel properties from five different hotel companies and discovered that Hyatt housekeepers had the highest injury rate of all housekeepers studied when compared by hotel company.

I’m joining my union, UNITE HERE, in calling for a global boycott of Hyatt because somewhere along the way the corporation forgot to have empathy and compassion for its workers. It seems to see us only as walking dollar signs and has forgotten that we are real people who have real families and real needs. We’re not robots. We demand fair pay and safe working conditions. We demand respect.

This week write a post, send a tweet or tell a friend to vote Hyatt the worst hotel employer in America. http://ow.ly/ciecC