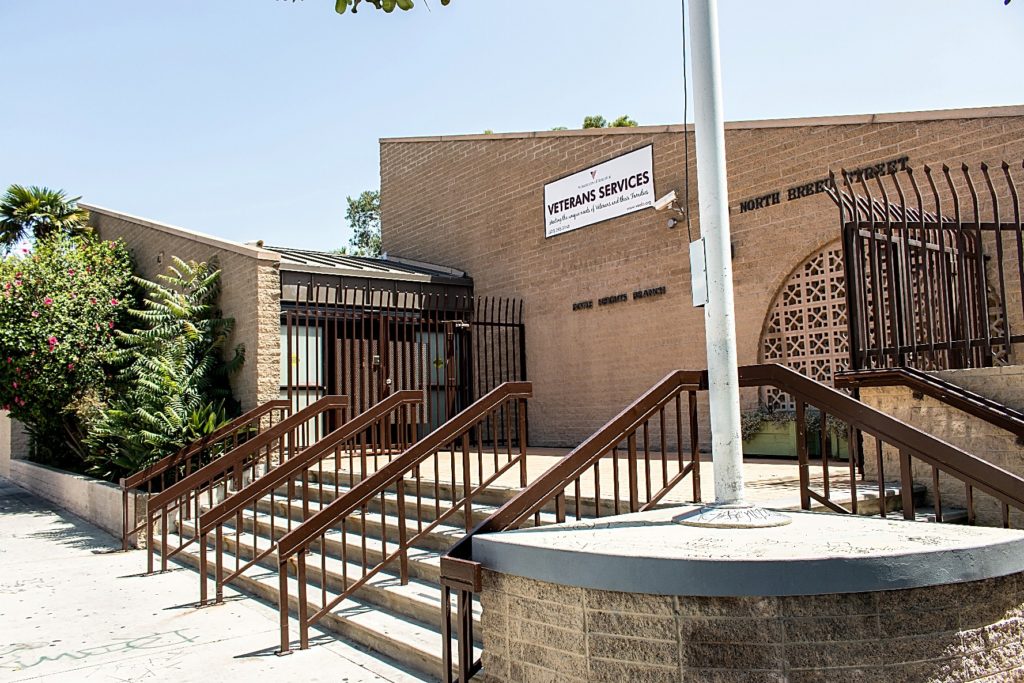 Hundreds of thousands of people sleep every night on the streets of the United States, where just about every major city is experiencing an affordable housing crisis. While no federal program offers completely free housing for the homeless, a little-noticed statute is allowing those who help this population to obtain federal property at no cost, turning abandoned buildings and lots into hubs for social services.

Her organization’s offices are located in the overwhelmingly Latino neighborhood of Boyle Heights, where the Los Angeles City Council blocked a plan in August to build new housing for the mentally ill and homeless. There’s an obvious need — Los Angeles County’s homeless population soared 23 percent from January 2016 to January 2017 — but efforts to provide housing and services for this community are always controversial, spurring concern not for human life, at least not in one’s backyard, but for property values that might decline.

The Volunteers of America building began life housing staff for the Social Security Administration. But now it provides air-conditioned space for homeless teenagers — a couch, a TV and a set of computers they can use for free— and the caseworkers who help between 500 and 1,000 homeless veterans every month find employment, housing and public assistance on Los Angeles’ Eastside.

“It’s a hot spot,” Lara said, “so having a presence here and providing services to the youth and others is critical.” The space, she said, “really is being used for the community.”

The building sat vacant for years until 2010, when Volunteers of America moved in. And while it is valued at $1.75 million, the group got it for free — explicitly because it promised to use the building to care for those without homes.

Under Title V of the 1987 McKinney-Vento Homeless Assistance Act, the U.S. government allows nonprofits and state and local governments to obtain, at no cost, unused federal property —a building or an empty lot — in order “to assist the homeless.” In 2016, the law was modified to make clear that such assistance could include permanent housing.

Nationally, around 500 buildings and 900 acres of land have been obtained by nonprofits using this statute, according to the National Law Center on Homelessness & Poverty. Properties are advertised every week in the Federal Register.

“We looked every week,” Pratt said. “It’s an Internet site, and we just scan it.” The desirable locations are few and far between, but a free building is a free building.

“It happened to be a perfect fit for us,” Pratt said of the old Social Security Administration building, “because of all our programs on behalf of homeless veterans. We needed office space for our staff. We needed counseling space for the veterans.” The government agreed and conveyed the building to the nonprofit.

Getting the property was “a relief,” said Taunya Taylor, assistant director of the volunteers’ Veteran Clinical Services. The cost of the building, or lack thereof, meant more money could go to services. “It makes doing the work easier,” she said.

“L.A. is kind of the hub of veteran homelessness,” Taylor said. “It’s a pretty place to be. There’s no snow and all that kind of stuff. So our population is really high in general because it’s easier to live here.”

That assessment is relative, of course. Easier than being homeless elsewhere doesn’t mean “easy” at all. And it’s not easy to get them off the streets either. Despite a pledge by Los Angeles Mayor Eric Garcetti to end veteran homelessness by the end of 2015, there were over 1,200 veterans living on the streets at the start of this year. This is the population Taylor serves.

“We do orientations about the housing process — fair housing, what their rights are, how to sustain their housing,” Taylor said. “We even have financial budgeting classes.”

Effective programs all start with a place to house such services. The success of the Title V program —transferring unused federal property to groups helping those harmed or neglected by a government that may well have sent them to war — is not just anecdotal.

Between fiscal years 1998 and 2009, more than $138 million in federal property was conveyed to groups that help the homeless, according to the U.S. Interagency Council on Homelessness. “Of the homeless assistance providers we interviewed,” a 2014 U.S. Government Accountability Office report states, each “cited a variety of benefits” from having obtained property under Title V, with a majority saying it “enabled them to expand their program or service capacity.”

National Law Center attorney Tristia Bauman said the biggest problem with the Title V program is that more properties aren’t made available under it, and no one knows about the ones that are.

She argued the federal government “can and should be more invested in seeing this program, which can place millions of dollars in unused federal assets into the hands of local governments and nonprofits to address the homeless crisis, succeed.”

In an era of cuts to so many programs perceived as helping the poor, however, it may prove to be a good thing that those now running the federal government are almost certainly, like almost everyone else, unaware that this program exists.

A Dream and a Microwave: Everytable Serves Healthy Meals to Hungry ‘Hoods