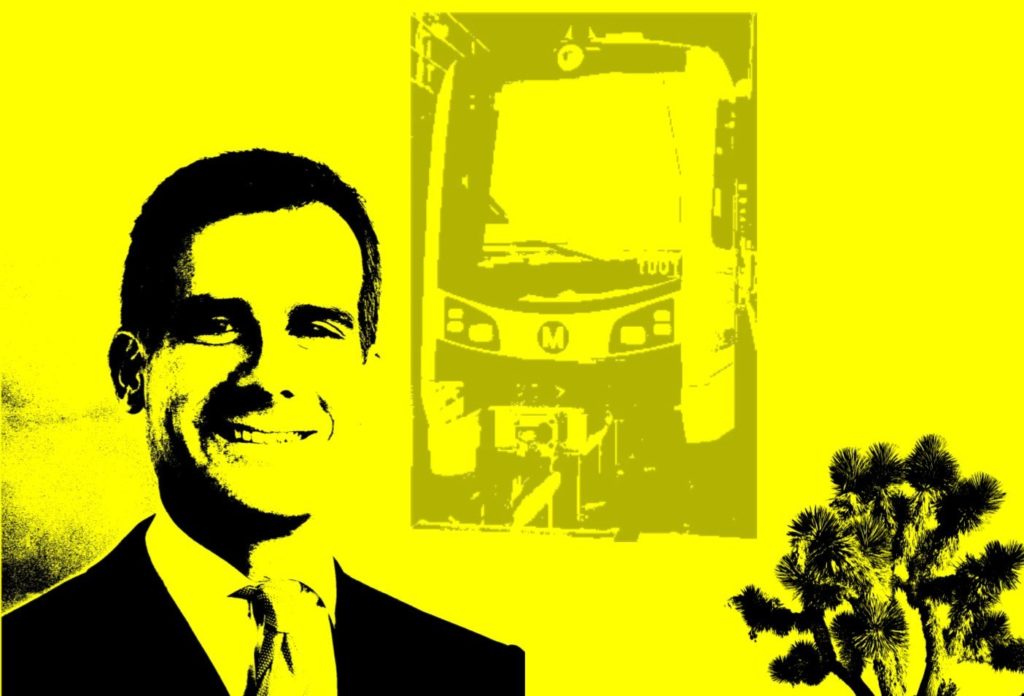 With tongue firmly planted in cheek Thursday, a beaming Los Angeles Mayor Eric Garcetti credited two secret weapons for helping him break a deadlock among a labor coalition, civic groups, Kinkisharyo International LLC and the city to craft a compromise to save jobs and keep construction of new light rail cars in Palmdale: “bad pizza and smaller meeting rooms.”

Garcetti also serves as chair of the county’s transit authority, Metro. His self-deprecating quip garnered a hearty laugh while setting the tone for a mostly celebratory morning press conference to announce the new agreement before Thursday’s regular Metro board meeting.

All of the speakers heaped praise upon Garcetti for taking the lead in this 11th-hour process to broker the deal. Two years ago Kinkisharyo won an $890 million contract to build 78 P3010 light rail cars for Metro, along with a future order of 97 additional cars.

But Kinkisharyo had balked at union organizing demands and labor filed an appeal claiming violations of state environmental laws regarding the retrofitting of the Palmdale plant. As late as October, company officials had threatened to consider moving the factory to other states, including Nevada, Texas, Arizona or Oregon unless an agreement could be reached.

“The lines were drawn in the sand a month ago,” Garcetti said. “But the partners to this agreement got this done because they focused their attention on solutions and the bottom line – new, middle class jobs, traffic reduction, cleaner air and economic development.”

Garcetti emphasized the new agreement shows that “L.A. works and works for all sides. I am ready and able to work with anyone to help create new jobs, solve problems and expand our manufacturing base.”

Under the agreement, which Garcetti and others said took about three weeks of late-night, face-to-face meetings to hammer out, the city and county kept the manufacturing plant for the new rail cars in Palmdale. The 175 cars being worked on at the facility will be put into service on the Crenshaw, Exposition and extended Gold lines.

The Japanese firm also agreed not to interfere with union organizing and a labor-favored, union card-check process at its Palmdale manufacturing plant.

“Our primary concern about the union demands was that [they] would change our business model and its proven, successful approach,” an affable Kinkisharyo General Manager Donald Boss told Capital & Main. “We didn’t want our flexibility affected…to get locked in regarding the job duties of assignments at the Palmdale plant, which we are leasing from Los Angeles World Airports.”

Boss said it was the “face-to-face negotiations over weeks of late-night meetings organized by Garcetti’s office” that calmed the company’s fears and paved the way for this agreement.

In a statement issued for the news conference, International Brotherhood of Electrical Workers Local 11’s business manager, Marvin Kropke, thanked Garcetti for his “great leadership” on this issue. Kropke also thanked Kinkisharyo for its “commitment to a strong partnership” and vowed that the IBEW would continue to advocate for “healthier communities and good, green jobs” in the Antelope Valley and L.A. County.

Meanwhile, the Jobs to Move America union coalition got at least 250 new, well-paying jobs and a commitment by Kinkisharyo to explore additional skills training and assistance for disadvantaged L.A. County workers.

The agreement, which at this point remains confidential, settled as “moot” the environmental challenge filed by the union coalition.

It also ended a California Public Records Act lawsuit and a new commitment was made between the Metro board, the labor coalition, Kinkisharyo and city government to develop new public records protocols, which Garcetti told Capital & Main would guarantee “Kinkisharyo’s trade secrets and provide transparency to the process.”

Durazo said that the agreement included safeguards to insure that Kinkisharyo would follow through on its promises and also implement the first U.S. Employment Plan to create American jobs.

Durazo emphasized that reaching this agreement had required settling all three of the main issues at the same time: “environmental concerns, public records issues and workers’ rights.”

Madeline Janis, director of the Jobs to Move America coalition, called the settlement a “win for Los Angeles taxpayers, transit riders, the environment and working families…and [one that] should serve as a model for other U.S. cities expanding their transportation systems.”