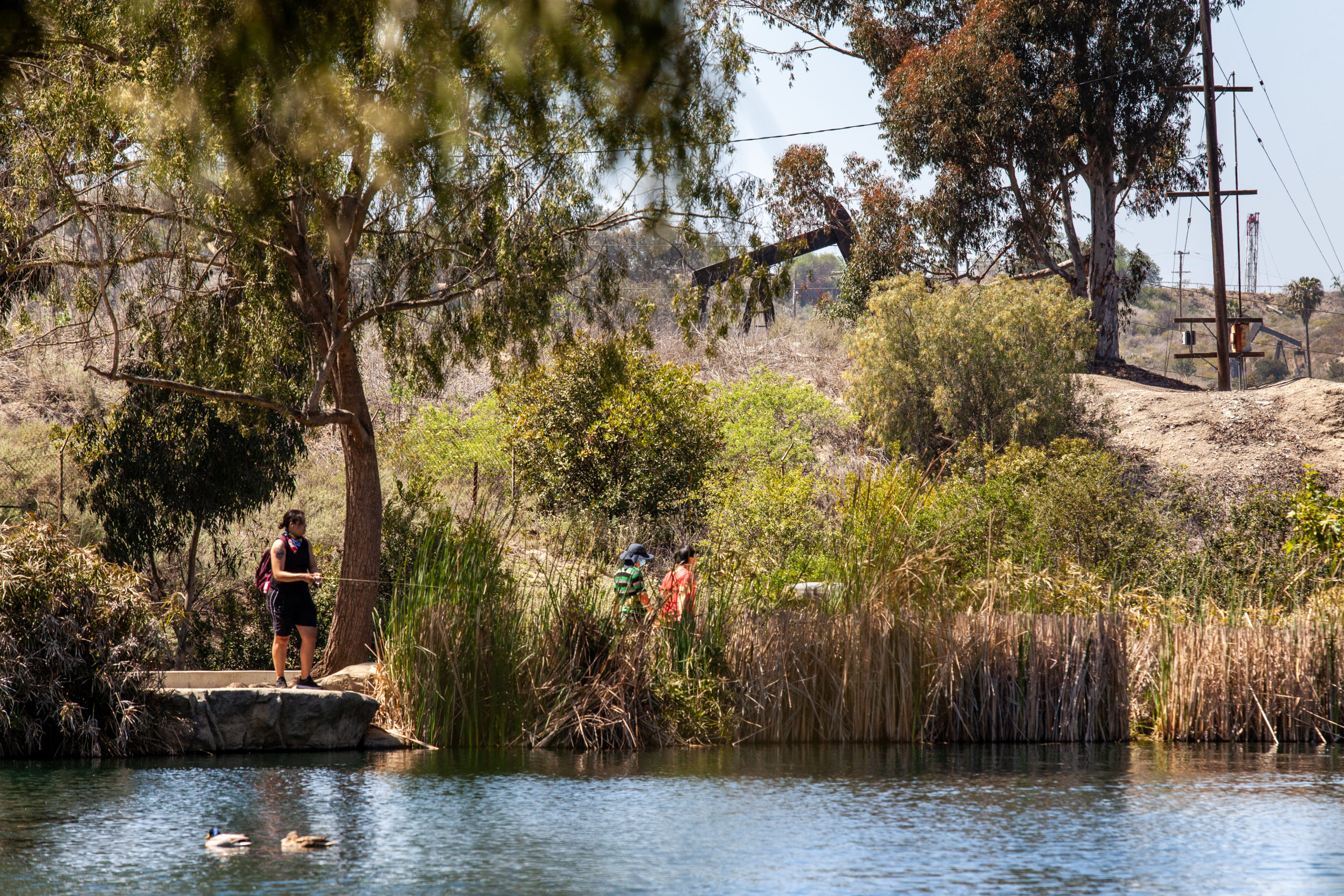 A small public park near the Inglewood Oil Field spill, with wells in the background. (Photo & drone images: Aimee Dewing)

This story is part of Covering Climate Now, a global journalism collaboration strengthening coverage of the climate story.

When Bakersfield-based oil company E&B Natural Resources sought to put wells in Hermosa Beach that would dig through the ocean floor sideways in 2013, the company’s president said he wanted the community’s trust.

“We understand that we must not only demonstrate that we can operate in a safe and environmentally responsible manner, but we must also establish trust,” Steve Layton told the Los Angeles Times. But Hermosa Beach rejected Layton’s offer of trust by voting down the proposed project.

Now environmentalists in Los Angeles say that E&B Natural Resources has violated another community’s trust after one of its pipelines at the Inglewood Oil Field leaked more than 1,600 gallons of oil on April 6, according to an initial state spill report, which says a shipping pipeline valve was left open through human error. A call to the Los Angeles County Fire Department’s Health Hazardous Materials Division to confirm the final spill amount was not returned by publication time.

The California Independent Petroleum Association is one of the most aggressive forces lobbying against tighter
environmental and climate regulations.

Oil producers have been drilling in the Inglewood field, the largest urban field in the country, since the 1920s, producing more than 400 million barrels of oil since. Environmental justice activists have recently started calling attention to the field’s health impacts on predominantly Black surrounding communities.

The spill was relatively small, but E&B Natural Resources plays an outsize role in the industry and wields influence in California politics, in part because company president Layton is also the chairman of the California Independent Petroleum Association. The trade group represents around 500 independent oil and gas producers in the state and is one of the most aggressive forces lobbying against tighter environmental and climate regulations.

Sabrina Lockhart, a spokesperson for CIPA, said that Layton leads the association’s board of directors meetings. He is listed as the association’s principal officer on the group’s most recently available tax filings. He also hosted a CIPA wine auction at his beachfront home in Long Beach last summer.

“Once discovered, our crew immediately shut down the pipeline. As required, all federal, state and local agencies were notified and the Los Angeles Fire Department reported that the incident posed no threat to public health and safety,” Cordova told Capital & Main. 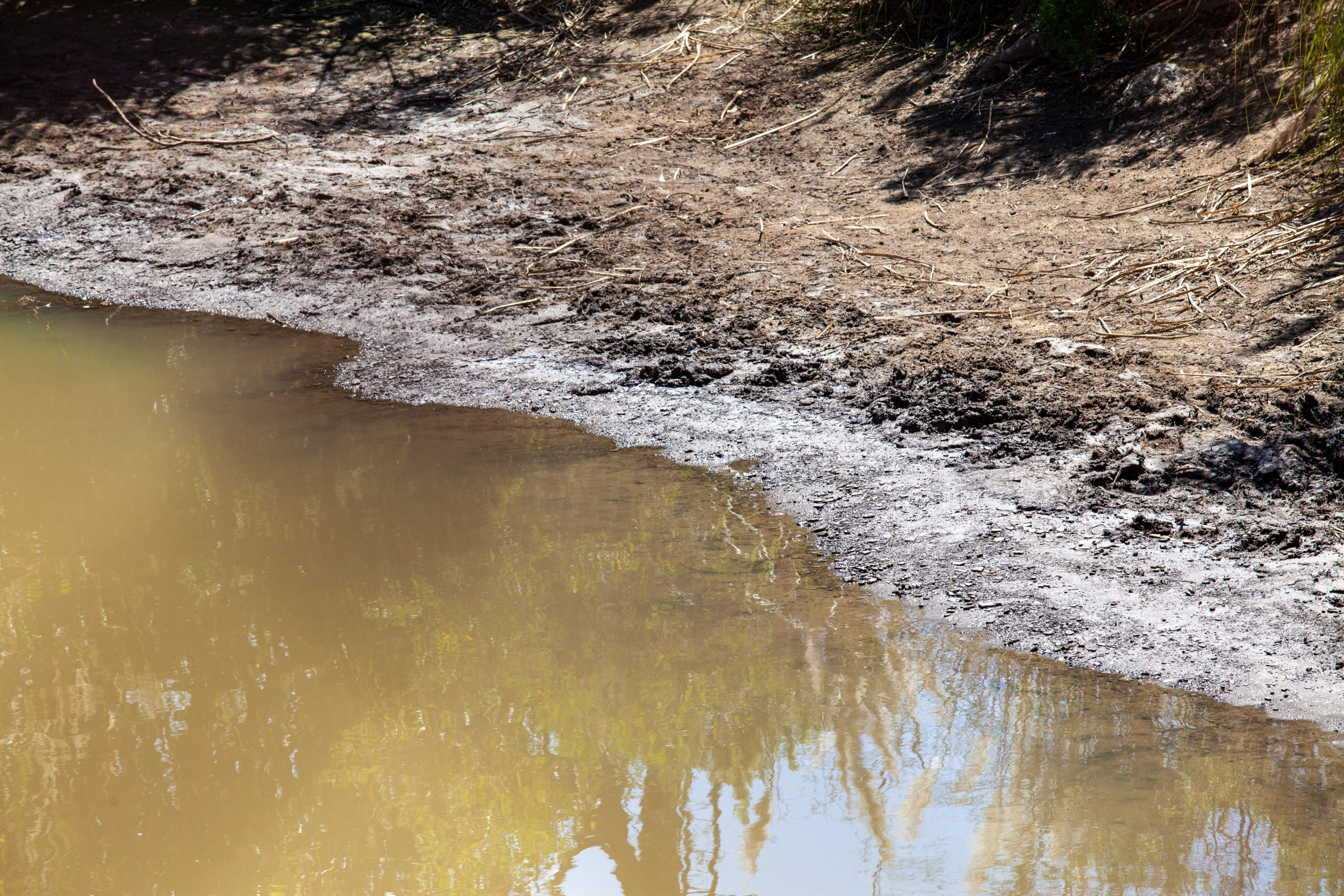 E&B Natural Resources’ idle wells are the subject of a lawsuit. Redeemer Community Partnership is suing the Los Angeles Fire Department for allegedly failing to order E&B Natural Resources’ to plug its wells at the Murphy drill site, which pose risks to the community from toxic fumes, carbon emissions and accidents.

“We on a week-to-week basis see this operator drive this [Murphy] drill site under the influence of greed, with reckless disregard for the health and safety of residents,” said Richard Parks, president of Redeemer Community Partnership, who calls the presence of oil operations there “environmental racism.”

While smaller oil projects in L.A. County such as the Hermosa Beach proposal have been rejected or mitigated by voters or community pressure, the Inglewood field has straddled the boundary between Culver City and unincorporated county land for nearly a century. It was completely unregulated by either jurisdiction until recently.

After gas releases and odors in 2005 and 2006, the Plains Exploration & Production Company, which operated the field at the time, approached the county to institute a regulatory framework. The process was favorable to the industry from the start, according to Martha Argüello, an environmentalist and co-chair of the STAND-L.A. Coalition and executive director of Physicians for Social Responsibility Los Angeles.

Argüello says that by comparison with L.A. County, Culver City has made greater efforts to regulate its portion of the field, voting last October to examine how it could wind down its oil wells. Argüello has lobbied the city of Los Angeles for years to implement 2,500 foot buffer zones between oil operations and homes, a distance based on studies of the health hazards near oil and gas operations.

“It’s not surprising” that the company responsible for the spill would share leadership with an oil lobbying group, according to Argüello. “There’s a lot of consolidation among companies in these fields. There’s a network, and they’re very well represented so we often find those relationships really challenging as we try to enact health policies.”

Those policies include a bill last year that would have instituted the 2,500 foot health safety zone between human dwellings and oil operations statewide. The bill died in a senate committee; the California Independent Petroleum Association said that killing the bill was its top priority. (Another bill mandating this health safety zone is currently wending its way through the Legislature, after being stripped of far-reaching regulations over hydrofracturing and injection wells.)

CIPA spent $1.35 million lobbying for pro-industry policies in 2019-2020, the most recent years for which data is available.

It succeeded in killing the health safety zone bill, and in addition, the association lobbied against a bill that would have required more oversight of groundwater quality and oil injection wells; a bill requiring the State Air Resources Board to publish annual data on greenhouse gas and air pollutants from wildfires; and a bill directing regulators to prepare for rising sea levels on California’s coast. All died before going to a vote.

CIPA also lobbied against a bill that increased criminal penalties for oil companies that knowingly spill oil in bodies of water or fail to properly clean it up. That bill was signed into law by Gov. Newsom last September, but only after being stripped of its strongest provisions.

Lobbying disclosures indicate that CIPA contributed about $1,896 each to several state legislators in March 2020, including to Sen. Steve Bradford (D), whose district includes the Inglewood field. Bradford and 10 other legislators also attended an event last year hosted by CIPA at the Rancho Valencia Resort & Spa, a luxury resort half an hour north of San Diego; CIPA’s Sabrina Lockhart described it as a “fundraising event.”

A spokesperson for Bradford declined to comment. According to CourageScore, a website managed by progressive groups, Bradford has received more than $160,000 in contributions from the oil and gas industry since 2000. 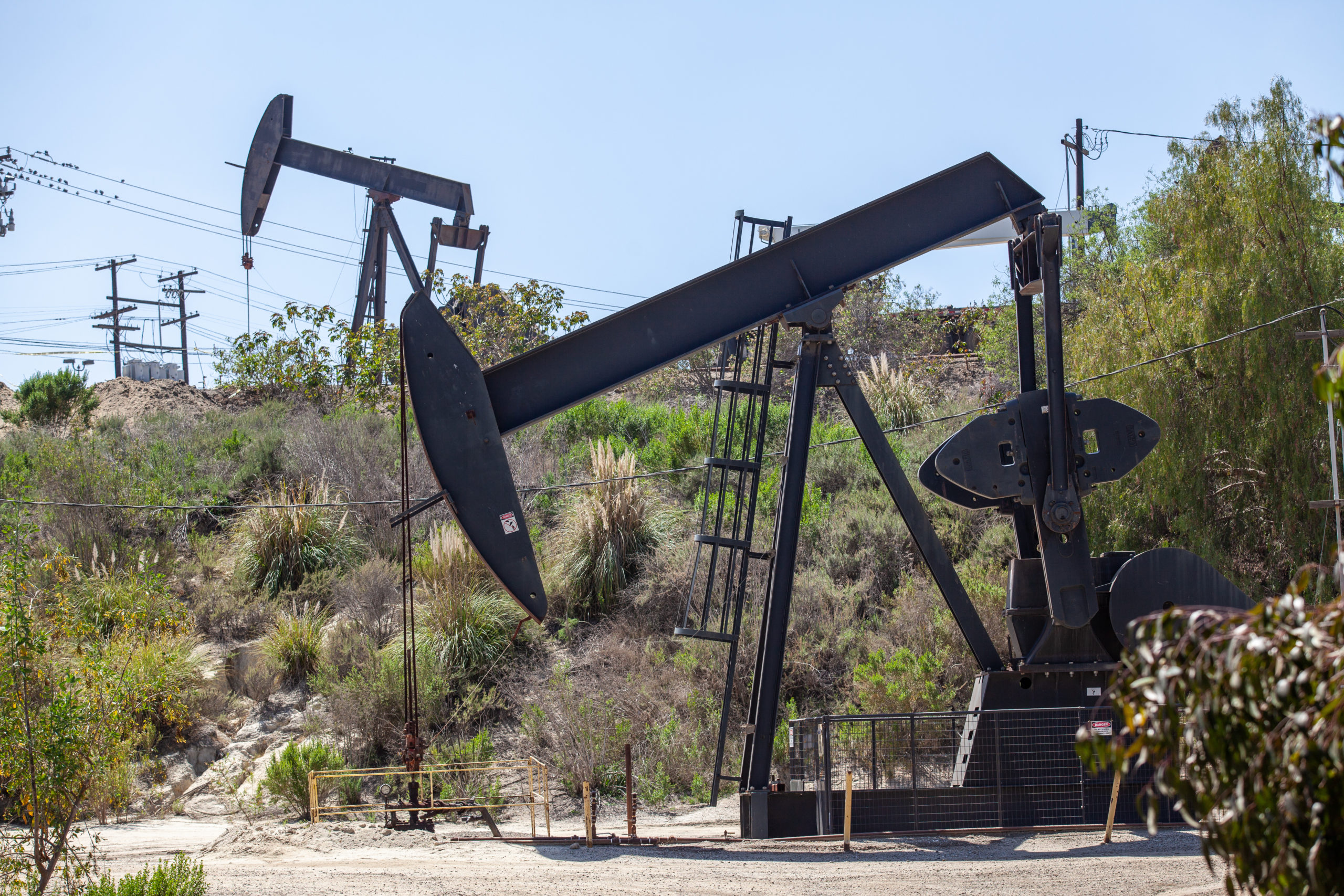 A section of the Inglewood Oil Field. (Photo: Aimee Dewing)

Capital & Main also reported on CIPA’s role in beating back new oil and gas regulations in Ventura County that would have brought certain new wells into compliance with environmental regulations implemented in the 1970s. CIPA worked with a public relations firm to gather signatures opposing the regulations, successfully delaying their implementation until a ballot vote in 2022.

Layton has run E&B Natural Resources since 2000, according to an online profile, and belongs to an array of other industry associations such as the National Petroleum Council. He’s a third generation oil producer once based in Texas and an outspoken advocate for smaller producers in comparison to multinational corporations like Chevron.

In a previous interview, Layton described his beliefs about the environment and the oil industry.

“People assume that members of the oil business don’t care about the environment, when really we know that not only can oil be recovered in a safe and environmentally responsible manner, but that the revenue generated from the production of oil can and does accomplish great things. Revenue from oil production can in fact help provide the funding necessary to build the bridge to a future beyond a hydrocarbon-based economy,” Layton said.