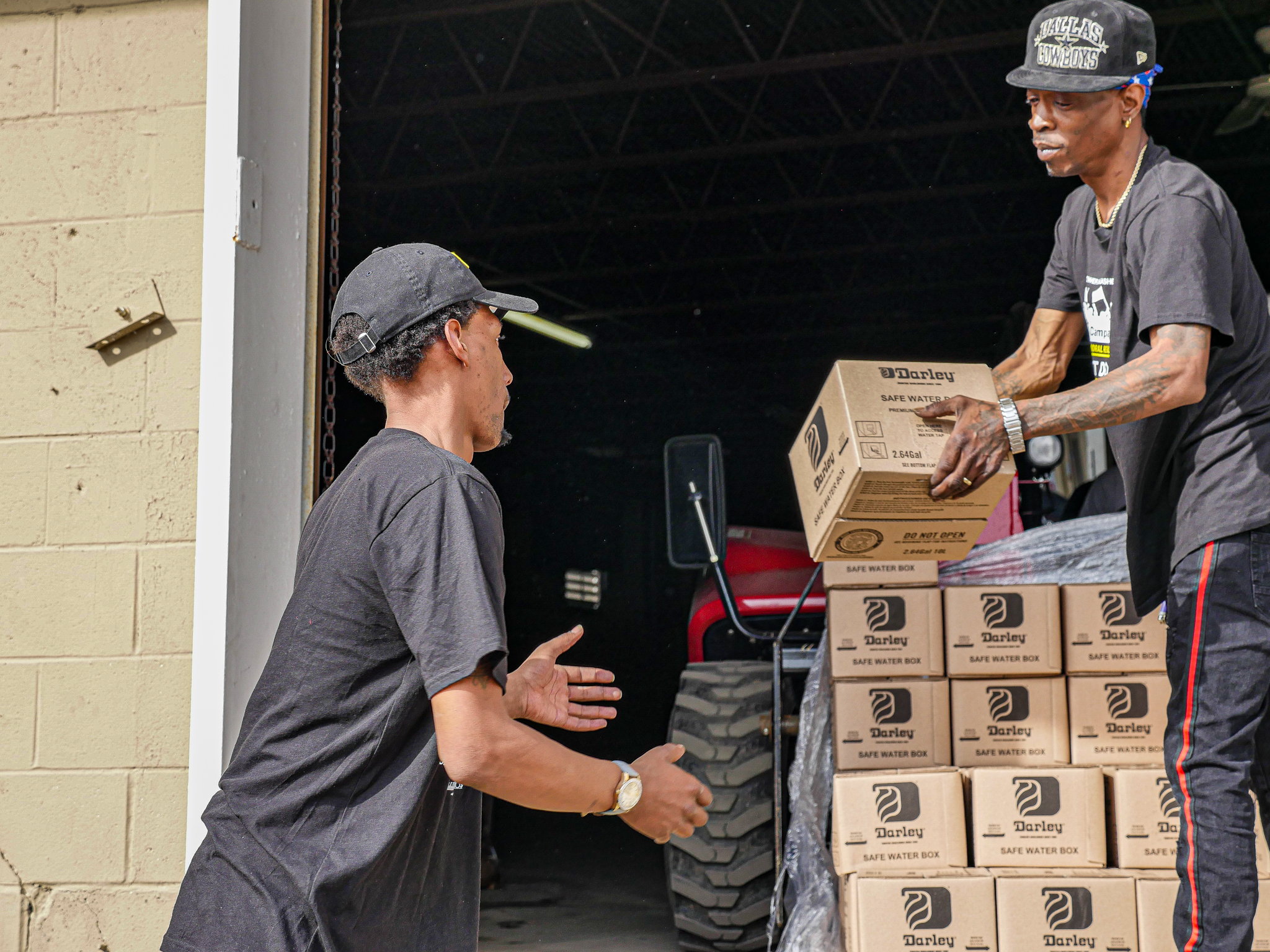 After two weeks of taking sponge baths, Kalif Wilkes lingered in a long, hot shower with plenty of steam in his Jackson, Mississippi, home. The water had just come back on for this capital city of 160,000.

Co-published by the Daily Kos

“The first shower I took, I stayed in there for 45 minutes. It was heaven,” says Wilkes, 25. “I bought a brand new bar of body soap, I rubbed shea butter everywhere and did a very deep exfoliation. I’d felt grimy.”

Wilkes is part of the Mississippi Winter Storm Rapid Response Coalition, a group of grassroots first responders who, a month after the back-to-back winter storms that froze the city’s antiquated water pipes, were still delivering boxes of water and hot plates of food to people in need.

“It’s the elephant in the room,” Wilkes says. “Four weeks since the storm and we’re still doing citizen relief because the relief from our government is essentially nonexistent.”

With a largely white Republican state leadership withholding resources to the Black and Democrat majority city, Jackson has long struggled with how to pay to repair its dilapidated water infrastructure, which even before the burdens of climate change was inadequate. Activists, residents and some journalists see the state’s decades of disinvestment as a long-term strategy of economic warfare to blight, condemn and ultimately seize the water system as a means of regaining political control of the city. In response, grassroots activists are taking matters into their own hands. 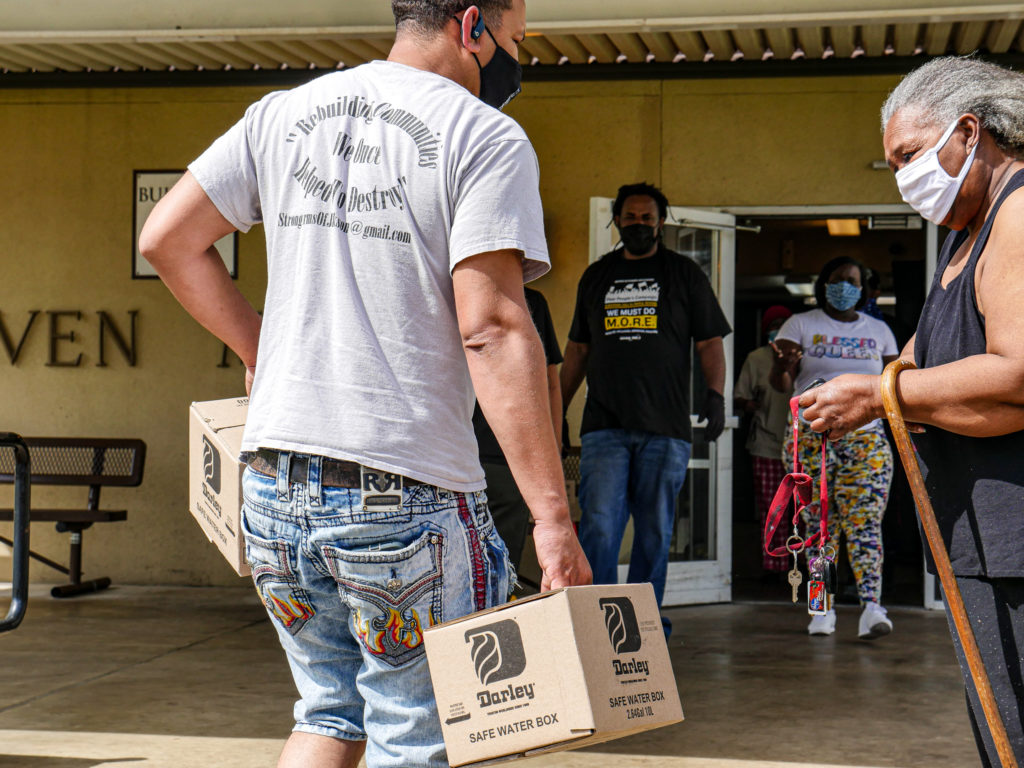 On March 13, with the city’s water supply still under a boil advisory, dozens of young men recruited largely from Strong Arms of Jackson, a violence interruption program, were out delivering Darley safe water boxes to residents still in need of potable water. Joyful calls of “Thank you, darling,” “Thank you, sweetheart” and “Thank you, baaaaaby” rang out in the streets, accidentally harmonizing with birdsong emanating from blossoming dogwoods and crabapples, ubiquitous in Jackson.

Down the road, Janice, a retired early childhood educator, was happy to receive her box and equally happy that the crew would lug it up the stairs for her. “This isn’t a Jackson problem, it’s an infrastructure problem,” she says. “When they get that fixed, everything will be all right.”

“The state and federal governments have shown us time and again that they will leave us to fend for ourselves.”

Rukia Lumumba, executive director of the People’s Advocacy Institute, says if it hadn’t been the winter storm, it would’ve been something else to bring the city’s infrastructure to a breaking point—hurricanes, tornadoes, flooding. Due to inaction from past state administrations, the crisis has landed squarely on her brother, current Jackson Mayor Chokwe Antar Lumumba. Their late father, Chokwe Lumumba, also served as mayor of Jackson but died in 2014, only eight months into his term. He’d inherited a 2012 federal consent decree that puts the city at risk of losing control of the water system’s management for noncompliance. If that occurs it would be a death blow to the city’s finances. In 2019, water sales contributed $62.8 million to the city budget, a number greater than the $58.8 million collected in general property taxes.

In 2014 the city adopted, by referendum, a 1% city sales tax measure proposed by the state to fund infrastructure projects under the direction of a state-controlled commission. But according to Kali Akuno, who served as the late mayor’s director of special projects and external funding, the action was taken reluctantly because of the mechanism for state rather than city control it bakes in. Putting the issue to a referendum was part of that administration’s commitment to democratize decision making. Ultimately, they hoped that a more direct public participation in governance via referenda and assemblies could lead over time to a political demand to force the state to relinquish its control of the city’s sales tax revenues.

Donna Ladd, founding editor of The Jackson Free Press and the nonprofit Mississippi Free Press, claimed, in a recent editorial, that the state’s diminishing budgetary support correlates to Jackson’s white flight, which began after desegregation. In 1960, 64% of the city’s roughly 144,000 residents were white, but by 2019, 82.2% of the city’s 160,828 residents were Black. Ladd likens Mississippi’s approach to Union Army General Sherman’s scorched earth policy.

“Be very clear,” Ladd wrote, “white wealth didn’t just take its money and stomp out into suburban developments (formerly known as cow pastures) to leave Black cities behind. It has, in fact, done everything possible to burn down what they couldn’t take with them. … They won’t support desperately needed flood mitigation for the city — unless it provides rich white people with valuable waterfront development.” 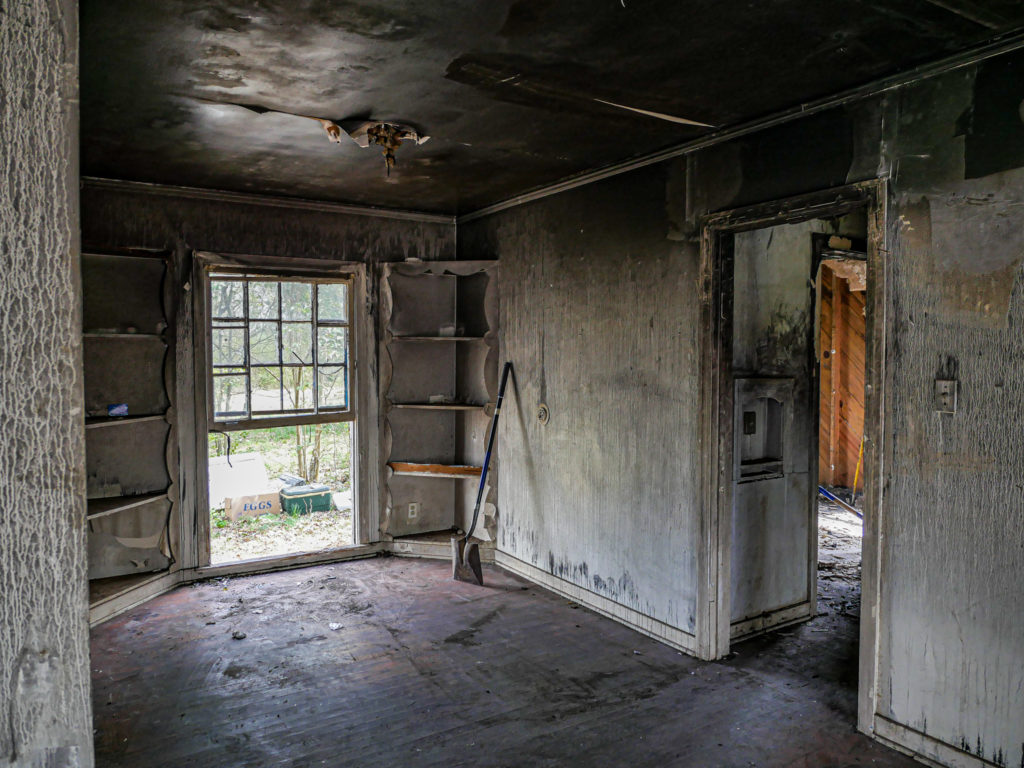 The state has also attempted to gain control of the city’s airport and its schools.

“What we realize now, is what we realized before,” Rukia Lumumba says, “that in every crisis we’ve had to literally take care of ourselves to save ourselves. The state has been completely neglectful, and intentionally so.”

Her organization has joined the Gulf South for the Green New Deal, which connects the dots between the regional climate, coastal, economic and political crises. “We’ve seen too many disasters hit us,” she says.

Phillip Rollins, 36, is the owner-operator of Offbeat Records, the meet-up spot for the day’s water giveaway. Though the storms’ impacts on his business and family were minimal, Rollins knows young families who struggled, and he thinks for some it could be the last straw.

“People will be like, ‘I Iived through this in Jackson, but I don’t want my kids to have to live through this shit, not having the basic necessities,’” he says. “This [lack of state help] could be a calculated move by some folks who’ve been wanting to get this space back.”

“The worst thing I’ve seen is people standing around with buckets
waiting for water like it was a Third World country.”

But homeowners like Mildred Coleman, 71, love their homes and remember a time when their neighborhoods were beautiful. Coleman is retired from a long career at the Mississippi State Tax Commission, where she worked first as a key punch operator before supervising 80 co-workers. She and her husband bought their house, where they live with two grandsons, 40 years ago for $32,000. Today she says she might get $16,000 for it.

“I would like for the city’s water system to be fixed, for the state to give them the money to fix it,” Coleman says. “We’re paying taxes. I worked for them for 30 years. I know they got a lot of money coming in, honey.”

Danyelle Holmes of the Mississippi Poor People’s Campaign says the ice storms and state government’s equally frigid response of “blatant disrespect” to her community has been a catalyst in organizing. She estimates that they’ve touched more than 50,000 low wealth and poor families in the past month via their mutual aid effort.

“The worst thing I’ve seen is people standing around with buckets waiting for water like it was a Third World country,” Holmes says. “The most beautiful is all the men you see around here; we probably would not be in community with them if this disaster hadn’t happened. These young men are never late, they’re serious about the work they’re doing. This is our place where we laugh a lot, we love on each other, we treat each other with dignity and respect, and we go out and do what we need to do. ”

The effort has been wholly self-help. 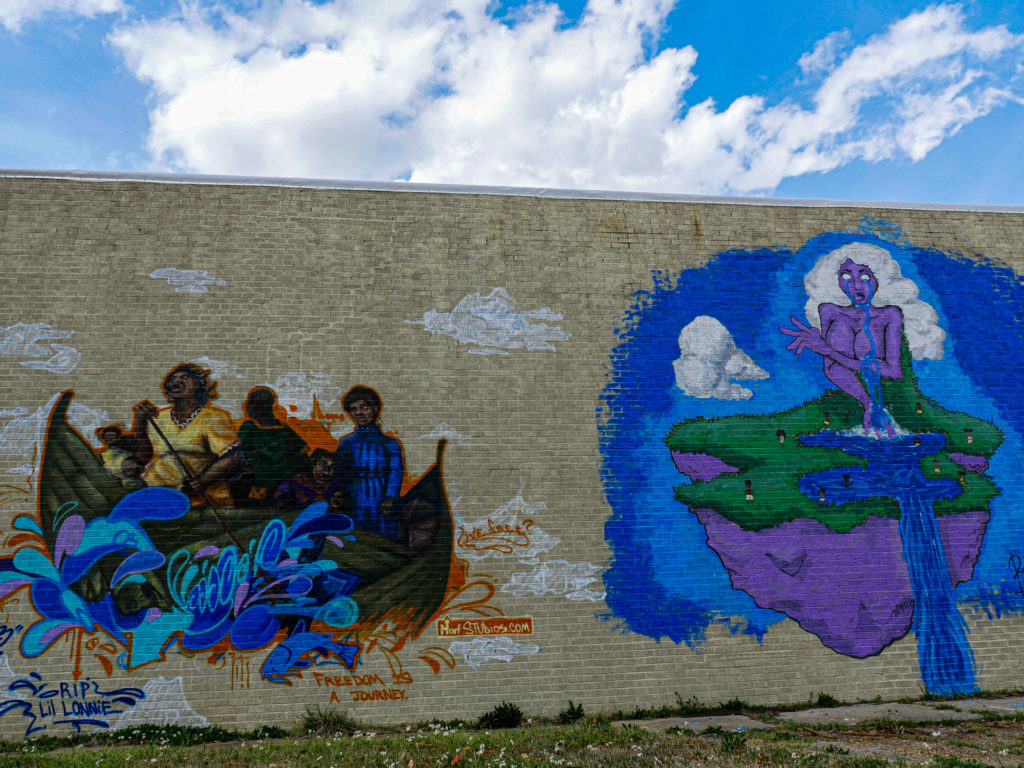 A mural in Jackson, Mississippi.

“It’s really Black folks taking care of Black folks,” she says. “For far too long we waited on more affluent communities to come in and rescue us; in the past that used to be a thing, but we don’t see that anymore, and that’s fine. We’re teaching our community about sustainable living.”

The Mississippi Winter Storm Rapid Response Coalition is working on creating a disaster preparedness plan with neighborhood hubs, and plans to assemble disaster kits and survival guides for future incidents. “We need some state funding, but we’re not going to wait on it,” says Rukia Lumumba.

A few miles away, Cooperation Jackson is also not waiting. During this particular week, the nonprofit, dedicated to sustainable community development, economic democracy and community ownership, hosted a carpentry brigade from Just Construction, whose 24 volunteers had traveled from Vermont, New York and New Mexico to help them restore two houses on properties in their Fannie Lou Hamer Community Land Trust.

“There are lots of homes in West Jackson that have been sitting and decaying,” says Sacajawea Hall, who, with her partner Kali Akuno, are co-founders of Cooperation Jackson. “Ten years ago their renovation wouldn’t have cost much, but now they have to be gutted, rewired and replumbed.”

They’ve joined in the water and food distribution and emergency preparedness efforts in the near-term and are gearing up to conduct future training on solar retrofitting and water catchment systems.

“We want our community to develop the infrastructure and institutions to be able to address our needs in times of crisis,” she says. “The state and federal governments have shown us time and again that they will leave us to fend for ourselves.”

Jackson is faced with an estimated $2 billion in infrastructure repairs. On March 16, U.S. Senator Cindy Hyde-Smith (R-Miss.) introduced Senate Bill 755 to tap into $47 million through the Army Corps of Engineers Section 219 program, which would allow the corps to provide assistance for the design and construction of environmental infrastructure projects; access to added benefits from the Environmental Protection Agency’s Drinking Water State Revolving Loans programs; and provisions to use no less than $25 million in unobligated Economic Adjustment Assistance grants via the Economic Development Administration to “eligible systems.”

Rukia Lumumba is not aware of any community groups on the ground in Jackson who have had any input or engagement with the bill’s drafting or who’ve been consulted after the fact. At the time of publication the senator’s office had not responded to Capital & Main’s request for more information about the process.

“My initial thought is that it doesn’t ask for enough,” Lumumba says. “It’s crumbs compared to what’s needed. But I am moved by the fact that it asks for anything at all because historically Cindy Hyde-Smith has not been a champion. There hasn’t been much that folks have seen her do across the state. Maybe she’s trying not to be in the spotlight for a failure?”

Akuno, however, calls the senator’s proposal a “total and complete ruse,” adding, “Hyde-Smith knows that the amount put forward in her proposed legislation would barely make a dent in addressing the problem.” He describes the bill as “a Trojan horse, a wolf in sheep’s clothing. A way to enter the scene and prepare the ground for the state government’s takeover and privatization of the city’s water system, which has been an objective of the state’s neo-confederates for years now. This bill confronts us with a choice between autonomy and submission, and it’s clear autonomy is our only real choice.”