Rosa Rivera, a housekeeper for the Golden Sails Best Western and five co-workers were fired 11 days before Christmas after 20 years on the job. Rivera holds a Christmas ornament she made during a night vigil asking the hotel to rehire her and pay a living wage. Photo by Jeannine Pearce

Rosa Rivera worked in housekeeping at the Best Western Golden Sails Hotel in Long Beach, Calif., for 20 years. In all those years, she never received health benefits, a paid vacation or a paid sick day. She often cleaned 17 to 18 rooms a day.

When Rivera heard that Long Beach voters on Nov. 6 had resoundingly approved Measure N, requiring nonunion hotels with more than 100 rooms to pay its workers at least $13 an hour and provide five paid sick days a year, she was overjoyed.

With the new wage increase, Rivera’s weekly paycheck would jump from $320 a week to $520, before taxes. She dared to dream of what it would be like to have almost $2,000 a month to live on.

Rivera, 43, shares a one-bedroom apartment with her daughters and granddaughters. She thought, finally, she might be able to afford a place with two bedrooms.

But last week, Rivera, along with five other senior hotel workers, was fired from her housekeeping job at Best Western Golden Sails. Hotel managers offered Rivera $1,000 if she would sign an agreement not to take legal action. She turned it down.

Days later, the rest of the staff received a termination letter ‒ but were given the opportunity to reapply for their jobs. Returning employees would be paid at the state minimum wage – $8 an hour – rather than the $13 approved by voters.

According to the hotel’s website, Golden Sails has 174 rooms. Laid-off employees said they were told the hotel was downsizing and would reopen with 98 rooms, avoiding the wage law.

Even before the November election, other Long Beach hotels told employees they would downsize to fewer than 100 rooms and lay off workers if the wage increase passed.

The city, a convention destination, has 16 hotels with more than 100 rooms. A second Best Western in Long Beach also reportedly downsized, closing one room to bring the number down to 99. Hotel Current in Long Beach claimed 143 guestrooms on its website just a couple of months ago, but now lists just 99.

A person answering the phone Thursday at the Golden Sails Hotel said they were open, but everyone had gone home for the day. Messages left for hotel managers were not returned. On Friday, those answering the phone hung up when they heard it was a reporter calling.

In a letter to employees, hotel management said “bad economic conditions” were the reason for the downsizing.

Workers in other cities around the country, especially in cities with a high cost of living, are pushing for increases to their states’ minimum hourly wage. Few workers earning minimum wage ‒ working full time or even working two jobs ‒ can cover their basic needs, much less support a family

In Long Beach, despite pressure from the local chamber of commerce and large hotel chains, a majority of Long Beach city council members support the minimum wage increase for hotel workers. Some have said they would like to strengthen the ordinance in the future by applying it to hotels with 80 rooms or more – boosting the pay of more workers.

“For the nation and local region to succeed, we need to ensure that we support and grow a strong middle class. That’s why I was proud to support Measure N,” said Robert Garcia, vice mayor of Long Beach.

Not everyone sees it that way.

“We tried to have small conversations with the hotel management, but they won’t talk with us,” said Jeannine Pearce, senior organizer with LAANE, a leader in the Long Beach living wage campaign.

Pearce said some laid-off employees were told the hotel has a new owner.

“We don’t know if this is a way of trying to skirt the law,” she said. “They are firing the current workers and bringing in new workers. The new employees have to sign forms saying they will accept California minimum wage.”

Organizers are researching whether the hotel violated the federal WARN Act (Worker Adjustment and Retraining Notification), which requires employers to give 60 days’ notice to employees who will be laid off because a business is being closed or sold. 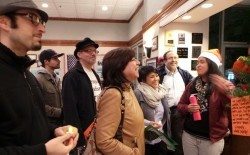 Community members and workers bring holiday cards and a Christmas tree to the management at the Best Western. The cards and handmade ornaments had messages such as “All I Want for Christmas is a Living Wage” and “This Christmas Have a Heart – Hire Back Fired Workers” Photo by Jeannine Pearce

“Closing hotel rooms was not the intent of the 64 percent of the voters who voted for it, they expect compliance and it is our job to make sure they get it,” said Smith, adding that they are also in contact with workers to let them know what their rights are.
It is little comfort to workers without jobs days before Christmas.

“It is really bad, really sad,” said Rosa Rivera. “I feel terrible. I’m trying to decide if I can buy a present for my little granddaughters, but I really don’t know if I can even pay my rent.

“I worked there for so many years, I don’t know what I am going to do,” said Rivera. “I am going to keep fighting. I am going to fight for my rights and the rights of the rest of us, too.”

Birth and Taxes: A Holiday Accounting