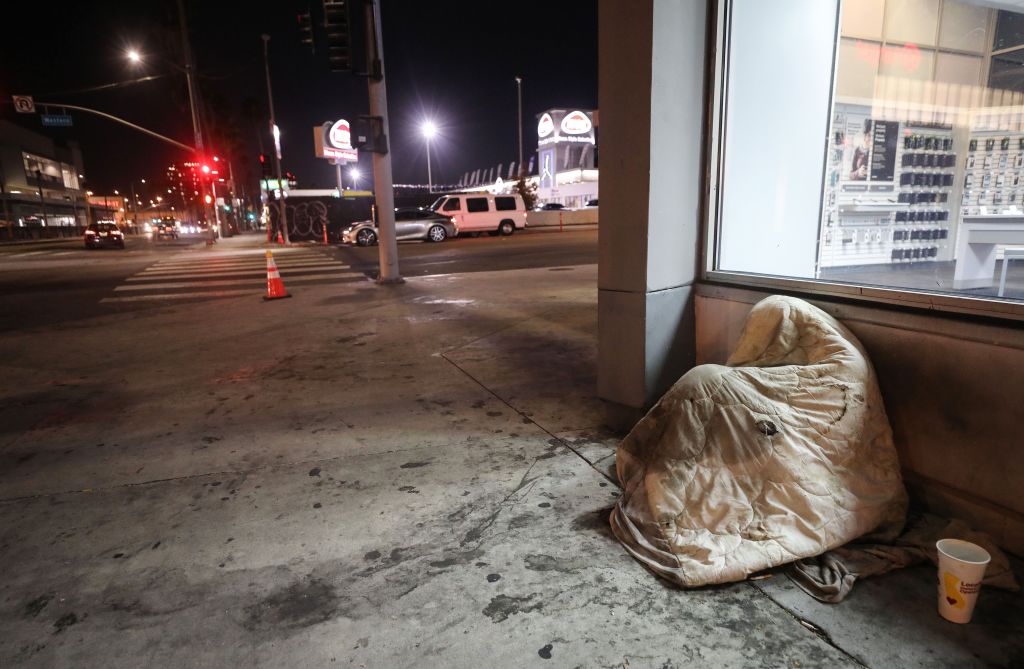 An unhoused person rests beneath a blanket on Sunset Boulevard on July 1, 2020 in Los Angeles. Photo: Mario Tama/Getty.

When the COVID pandemic arrived on U.S. shores, public health experts predicted that the nation’s homeless population would be hit hard. The April outbreak at the Union Rescue Mission on Los Angeles’ Skid Row – epicenter of the region’s homeless crisis – appeared to bear that out.

More than 90 people tested positive for the coronavirus, and Gerald Shiroma, a 56-year-old resident and employee, was the first homeless person to die. “It hit home,” recalls Reverend Andy Bales, CEO of the Union Rescue Mission, who would lose two more residents to the virus.

But while there have been significant outbreaks in shelters, the most dire predictions – including one made in a report published in March – do not appear to have materialized, according to recent news reports.

What may be protecting homeless people from contagion – living outdoors – has other deadly consequences.

But what may be protecting homeless people from contagion – living outdoors – has other deadly consequences. Since February, the number of homeless people dying every month in L.A. County has been on the rise. In fact, 140 homeless people died in the county last month, a life lost every five hours, according to recent data from the L.A. County Coroner-Medical Examiner’s office obtained by Capital & Main.

That’s a monthly spike greater than any seen in the last three-and-a-half years and perhaps ever. The pre-COVID month that came closest to July was January 2019, when 112 homeless people were reported to have died.

Overall, the county has seen a 23 percent increase in deaths in the first seven months of 2020 when compared to the same period last year. And things could deteriorate further. “The worst of the hot weather, the worst of the dehydration, the worst of the cold weather is still to come,” said Bales, who described the numbers as “scary.” California’s eviction moratorium will be lifted on Sept. 1 unless Gov. Gavin Newsom signs a law to extend it, possibly leaving more people without a home.

In recent years, homeless deaths have been on the rise in Los Angeles, Sacramento,  San Diego and elsewhere as homelessness has grown in the high-cost state. Living on L.A.’s streets has also become more dangerous. The number of homeless deaths in 2019 – 1,039 – represented a 13 percent increase over 2018.

“It was an emergency out there before the pandemic. It will be an emergency after the pandemic. I keep saying this,” said Dr. Coley King, director of homeless services at the Venice Family Clinic, which provides street medicine to thousands of people on Los Angeles’ Westside every year. He says the county has taken important steps in response to the pandemic, including a program that places homeless people who are especially vulnerable into hotel and motel rooms and transforms city recreation centers into shelters. “We all went to work tucking people into Project Roomkey.” More than 4,300 people have found lodging through the program.

But Bales says he thinks that there may actually be fewer shelter beds overall in the region because providers like him have had to cut back on the number of beds in order to stay within social distancing guidelines. “We used to have over a thousand under our roof. We’re just climbing now back up to about 400 at our downtown Union Rescue Mission,” he said.  “We’re leaving more people on the streets than we ever have.” Nineteen of the 26 city recreation centers originally opened to the homeless as shelters have been shuttered, according to a report in the Los Angeles Times. The city had offered them for temporary use.

More than 70 percent of L.A. County’s 59,000 homeless population lives on the street or in their vehicles.

“We’re consolidating sites and resources to make it easier for LAHSA [Los Angeles Homeless Services Authority] and service providers to prioritize placements in longer-term shelter and housing,” Alex Comisar, a spokesperson for Mayor Eric Garcetti, told the Times. More than 70 percent of the county’s 59,000 homeless population lives on the street or in their vehicles, according to the county’s last count.

LAHSA, the regional planning body that coordinates homeless services for the county, declined to comment for this story.

The cause of death for many of the homeless people who died in 2020 has yet to be determined by the investigators. That is true for two homeless people in their 60s – a Latina and an African-American man – who died within six days and a tenth of a mile of each other last month on the streets of Skid Row.

The L.A. County Public Health Department and the L.A. County Medical Examiner-Coroner’s Office are working on an update of last year’s report on mortality among the homeless. “It will also include a targeted analysis of data from [January to July] of 2020 to compare overall, cause specific and COVID-related deaths to [January to July] of 2019,” according to an email the health department sent to Capital & Main.

That report, published in October, attributed the rise in death rates among the homeless to drug and alcohol overdoses, as well as to transportation-related injuries – such as being hit by car – and homicides. The county has increased the number of substance abuse treatment facilities by 33 percent over the past five years and improved its testing for drug overdoses, according to the county’s Public Health Department. But that increase in services has coincided with a rise in homelessness and in the prevalence of lethal drugs on the street such as fentanyl, a synthetic opioid that is 50 to 100 times more potent than morphine.

The need to maintain social distance has led to people using drugs alone, without the support of someone who might be able to administer naloxone or call for help.

The pandemic has added stress to a population whose stress level is already sky high. Aspects of life in the pandemic from closed libraries to lost jobs to social distancing make life on the streets more treacherous, particularly for those with substance abuse and mental health challenges. The need to maintain social distance has led to people using drugs alone and without the support of someone who might be able to administer naloxone or call for help, according to county health officials.

King says that in many cases the immediate cause of death – for instance, a traffic accident – reported in the coroner’s report may obscure the reason some find themselves in harm’s way: untreated mental illness. He says part of the county’s response requires having more medical teams out on the street.

He was able to help a “very activated” woman with a hip fracture who suffered from schizoaffective disorder and past trauma and lived in the doorway of a shuttered department store near the Third Street Promenade in Santa Monica. After repeated outreach, she finally agreed to receive psychiatric treatment and was able to settle into a hotel room. He is afraid she will be hit by a car unless she remains on her medication, a long-acting antipsychotic, which he administers with monthly injections. “She’s clearly outdoors and at very high risk of doing very poorly if she were to contract COVID-19,” he said.

In Sacramento, Shannon Dominguez-Stevens, the director of Maryhouse, was parked in front of her house when she got a text informing her that Cheyenne, a longtime guest of the daytime shelter for women and families, had died. Cheyenne was someone with whom she had felt a special connection. “I had driven right by her body on my way home and I didn’t know she was there,” Dominguez-Stevens said. About an hour later, she took to Twitter to express her despair.

“She was hilarious (but a mean drunk), beautiful, so damn smart and she took no shit (but served up lots of it). She was a veteran and indigenous. She had family who loved her, a son who called to check on her often. The housing we connected her to never worked out, she desperately needed compassionate supportive services.”

So far this year, six of her guests have died, Dominguez-Stevens said. Those who have tested positive for COVID have recovered. In all of last year, Maryhouse lost nine guests and 14 the year before.  For every guest who dies, Maryhouse holds a memorial service and adds a name to a granite wall by a fountain that is central to its campus. “It’s very late in the game for us to be recognizing this as an absolute crisis,” she said.

Did Barbara Ferrer Fail to Protect L.A.’s Most Vulnerable from COVID?