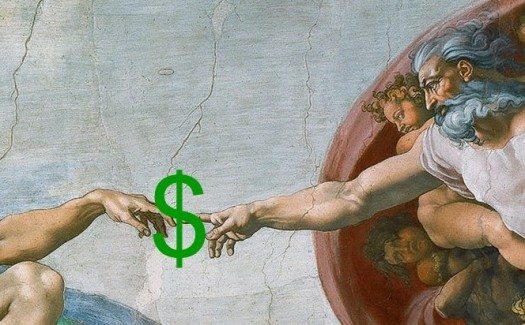 At the 1992 Republican National Convention, then Vice Presidential nominee Dan Quayle summed up his thoughts on taxing those with greatest wealth at higher rates with the line, “Why should the best people be punished?” This rare candor spotlights the beliefs still central in today’s economic policymaking.

Last week, House member Kevin Cramer (R-ND) invoked scripture to justify taking food from the mouths of babes, saying “If anyone is not willing to work, let him not eat.” His colleague, Rep. Steve Southerland (R-FL) similarly declared, “work is a blessing.” Clearly, the economy is intended as far more than an aggregation of what we produce, purchase, consume and invest. We’re meant to see it as an instrument to impose a particular morality: to reward the good and punish the naughty.

Republicans would go further and have us believe the economy is an angry and vengeful God. And it’s pissed in particular at the President, especially his signature health insurance legislation. In commenting about the most recent move to repeal Obamacare as part of the continuing resolution to fund government, House Majority Leader Eric Cantor (R-VA) echoed many of his colleagues by saying, “We’ve said from the beginning this law will harm our economy.” In fact, we’ve become so accustomed to thinking in these terms, we no longer ask how policies will affect Americans and are content to debate what the economy thinks, wants and prefers.

Because Obama and fellow Democrats haven’t paid sufficient homage to it, the Economy will keep visiting ruination and recession upon us. Or so the GOP hopes voters think come midterm elections.

The solution for this, as will be familiar to modern day Greeks and low income Americans, is sacrifice. “Sacrifice” is not an arbitrary or accidental word. It’s become a hallowed notion in our political rhetoric, the go-to solution for whatever ails us economically.

The National Journal summarized this philosophy: “If Americans can summon a spirit of sacrifice and start acting again like adults, our leaders will lead.” Last time this debt debate show was on in D.C., President Obama described the issue in these terms, “To restore fiscal responsibility, we all need to share in the sacrifice.” Politicians may not be asking us to pull on hair shirts or flagellate ourselves with whips, but their high praise of austerity emerges from this strange notion that the Economy has a strong vested interest in our behavior.

Reasonable arguments about appropriate spending and saving levels aside, just what does this laser-like focus on the morality of economic actions mean for our perceptions of who ought to do what to whom? All of the major religions have plenty to say about what’s moral in the economic realm, none of it related to denying people’s basic needs to entice them into behavior we deem favorable. In fact, if there’s anything the big three monotheistic religions convey it’s precisely about the meek inheriting, the wealthy as suspect and moral duty to help those who have less.

The need to twist a governing approach dedicated to making more people poor while rewarding a small cadre for doing so into a doctrine is not at all surprising. How else would those peddling it have us accepting ideas like further shredding a safety net that’s basically dental floss all the while subsidizing huge business and allowing them to exploit loopholes to contribute practically nothing? Those preaching this Love-Thy-Economy-as-Thyself gospel often swear their policies are in service of not only aiding but also rewarding the job “creators.” This word, deliberate as well, echoes the capital C creator. The one in whose image we’re to believe the rich are made.

As we endure the next weeks of the Congressional cage match over the debt ceiling, funding government and destroying people’s access to insurance, note how politicians and the media will spin talk of what they want to do to you and yours into some just-so morality fable. And don’t buy it.

The economy doesn’t actually have needs, desires or preferences – we do. If our elected representatives, now working on the economy’s behalf, want to screw us, we at least deserve dinner first. Something a little nicer than you can purchase with food stamps.

(Anat Shenker-Osorio is the author of Don’t Buy It: The Trouble with Talking Nonsense about the Economy. Her post first appeared on Huffington Post and is republished with permission.)

Film Review: ‘Inequality for All’