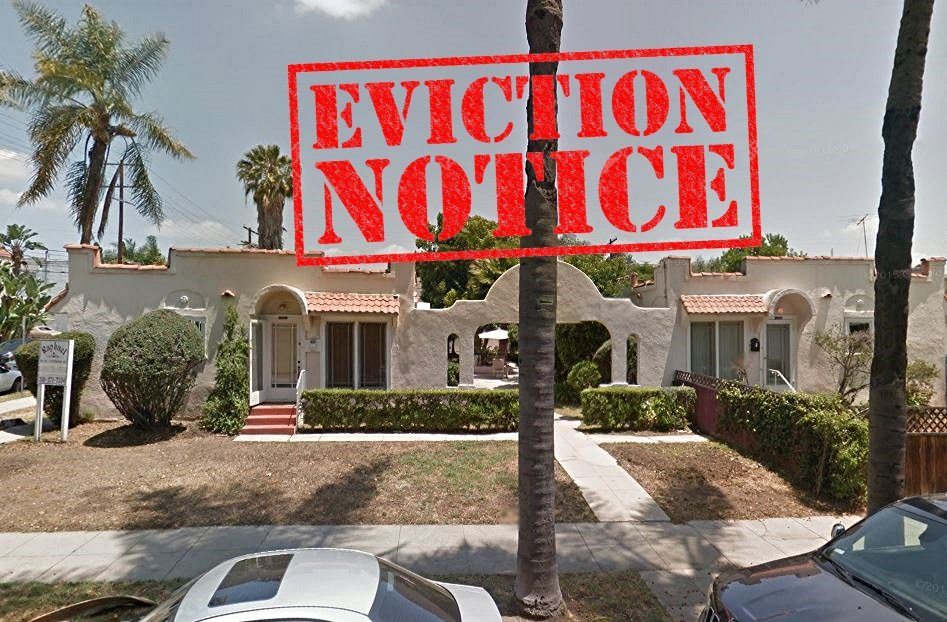 Thanks to the determined efforts of tenant activists and area residents, real estate developer Matthew Jacobs’ plan to demolish eight affordable housing units in the Fairfax District and replace them with “luxury” living accommodations has been put on hold—for now. Jacobs (who recently resigned from his chairman post at the California Housing Finance Agency), his business partner Guy Penini and their company, Bulldog LLC, had already begun demolition of the rent-controlled bungalow structures located at 750-756 N. Edinburgh Avenue (where they used the Ellis Act to evict eight families), when the city abruptly halted their tear-down undertaking.

Tenant activist Steve Luftman, who lives in another Jacobs-owned building that was also slated for the wrecking ball, is involved in the Edinburgh preservation project — just as he was for the building that he lives in. Luftman’s Flores Street apartment complex was designed by noted architect Mendel Meyer, whose firm also designed Grauman’s Chinese Theater, and was just this month given historical monument status by the city’s Cultural Heritage Commission. This effectively halted Jacobs’ hasty push to tear down the Flores Street courtyard complex, because such a designation automatically creates administrative delays, including a mandatory Environmental Impact Review (EIR).

In an August 12 article for Park Labrea News/Beverly Press, Luftman declared, “I’m trying to accomplish two things – first, I want to bring this issue with the Ellis Act to light because it should be changed overall. Second, our neighborhood is a great resource in Los Angeles, and [Jacobs] wants to come in and ruin it. I’m fighting against that happening and I am finding that I have a lot of support.”

The dwellings on Edinburgh Avenue had been identified for historic designation by SurveyLA and the Office of Historic Resources, and community members had submitted the nomination with the city, requiring an EIR that would have to be completed before any owner modifications were made. But that didn’t stop Jacobs from trying to tear down the apartments. In April, he filed plans with the city to build a small lot subdivision (SLS) on the property and to obtain a demolition permit.

But there was that EIR standing in the way, so on September 8 Bulldog LLC withdrew its application to build the SLS, and opted instead for “by right,” status on the project, which meant that Jacobs and Penini only wanted to tear it down. This, however, wouldn’t preclude them from coming back in a month and claiming that they had changed their minds about not building an SLS – after the building was already gone. (Jacobs did not respond to requests to be interviewed for this article.)

As John Henning Jr., a land use lawyer, explained in a letter sent to the planning department, “the demolition of the existing 1923 bungalow court is an integral part of the small-lot subdivision project, and cannot be separated from the project as a whole as that would constitute ‘piecemealing’ or ‘segmentation.’ The existing structure, which would be demolished to make way for the proposed small-lot subdivision, is recognized as historic by the Office of Historic Resources (OHR) . . . perhaps most importantly, the SurveyLA document specifically states that these structures are suitable for designation as City of Los Angeles Historic/Cultural Monuments, and also as individual properties in both the National Register of Historic Places and the California Register of Historic Resources.”

Ken Bernstein, Manager of the Office of Historic Resources and Principal City Planner at the Department of City Planning, told Capital & Main, “We were aware that some of the community members had submitted a nomination to grant the building historic status and that the applicant had SLS approval. But when they withdrew their application, they were able to acquire demo permits very quickly. Given the fact that demolition was imminent, and the property had been identified as significant, it was prudent to err on the side of caution, so the nomination was initiated last Friday, and we obtained a stay on any further demolition.”

Brian Harris, who lives adjacent to the property, says he found out about the demolition last Thursday night, September 10, and started sending emails to City Councilman Paul Koretz’s office, tenant activists and the office of Building and Safety. Around 11 a.m. Friday, asbestos-removal workers arrived at the site and, when demolition began in the afternoon, it seemed that Jacobs’ end-around, jet sweep play would succeed.

But after inflicting only minor damage on the property, the workers went home – an order halting the demolition had been posted at the site. Meanwhile, a letter from Michael LoGrande, Director of Planning of the Department of City Planning, was delivered to Guy Penini, informing Bulldog that demolition was being stopped “pending final determination of potential monument status.”

“I was ecstatic with the outcome,” says Harris. “This property has been on the street since 1923, when the street was named Society Avenue. It deserves a chance at recognition and life. It deserves to have creative people in it, as that’s why most bungalow courts in Hollywood were built — to house people in the entertainment industry. There were musicians, actors and woodworking artists living there before they were evicted with the Ellis Act by the new owners. We’ve lost many contributing beautiful neighbors already. I don’t want to lose beautiful historic architecture too.”