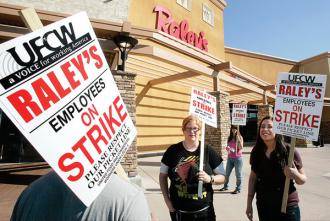 There’s power in the picket line. And employers know it.

That’s why, in 2008, Ralphs Grocery Company sued to have union picketers removed from the front of one of its non-union stores. But California has explicit laws to protect labor-related speech, and the court denied the request by Ralphs.

But that hasn’t stopped the grocery chain from continuing its courtroom battle to silence workers – even though they’ve lost just about every case. Last December, California’s Supreme Court upheld the ruling in favor of the picketers. Speaking for the California Supreme Court’s 6-1 ruling in the Union’s favor, Justice Joyce Kennard wrote that the 1975 state law and follow-up legislation passed in 1999 are

“. . . justified by the state’s interest in promoting collective bargaining to resolve labor disputes, and the understanding that the area outside the entrance of the targeted business often is the most effective point of persuasion.”

And last week, California working families scored a huge and decisive victory when the U.S. Supreme Court refused to review the employer’s appeal on the constitutionality of labor-related speech on private property.

“This decision is a clear victory for our union and all working families [in] our state. While we are glad to achieve this decisive legal victory, it is troubling to witness a long-time union employer taking a hostile stance toward workers’ rights to express themselves freely. Educating shoppers and workers about their basic rights to a decent wage, good health care, dignity in retirement and respect on the job should not result in lawsuits and appeals to the U.S. Supreme Court.”

Through its YourBreadAndButter.com campaign, UFCW 8 continues its efforts on behalf of employees at Walmart, Fresh & Easy, Nugget, Target, Whole Foods, WinCo, Vallarta, Trader Joe’s and other retail chains known as failing to meet industry standards in wages and benefits.

“Our members are prepared to do whatever it takes to ensure all workers have access to the good pay, health care, pensions and job security provisions enjoyed by union members.”

Obamacare and the Low-Wage Work Crisis