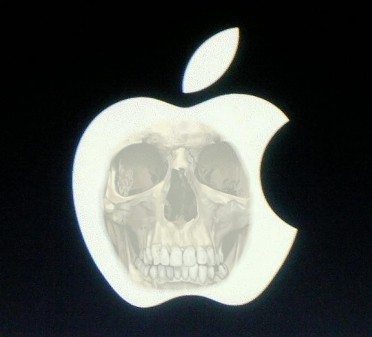 Odds are good that right now, you are using a product that was manufactured in a way that would make you uncomfortable.  Not necessarily your tennis shoes (maybe you wear one of the few brands still made in the U.S.).  Not your food (though no one wants to know how the sausage is made).  No, if you’re reading this blog on a computer, a tablet or a smart phone, that device was probably made in China under conditions that you may have studiously avoided knowing about.

Most tech companies are only too happy to keep you in the dark.  (Apple has recently made an announcement on this front—more on that in a moment.)  On a recent episode of This American Life,* one man decided to try to do his own investigation.  The entire episode told the story of Mike Daisey, a self-described “Apple fanboy,” who traveled to Shenzhen, China to meet the workers who assemble the technology he loves so much.

Starting at a Foxconn plant – where there have been an alarming number of worker suicides – and then visiting other plants throughout Shenzhen, Daisey talked to scores of workers.  (Foxconn makes products for Apple, Dell, Nokia, Panasonic, and many other well-known brands.)  He heard about 14-, 15- and 16-hour days.  And these are, as he puts it, not like our hours: “They work a Chinese hour, and a Chinese hour has 60 Chinese minutes, and a Chinese minute has 60 Chinese seconds. It’s not like our hour. What’s our hour now, 46 minutes? You know, you have a bathroom break, and you have a smoke break. If you don’t smoke, there’s a yoga break. This doesn’t look anything like that. This looks like nothing we’ve seen in a century.”  Is it any wonder, then, that during Daisey’s visit, a Foxconn worker died after a 34-hour shift?

He detailed the utter silence of the assembly lines (you are demerited if you speak on the line).  The neurotoxins to which workers are exposed.  The 12- and 13-year olds working in the factories.  The 12-foot by 12-foot dormitories with 15 beds in each, with space so narrow that you “have to slide into them like coffins.”  The ubiquity of the cameras.  Reflecting on the totality of the conditions, Daisey notes that “when we dream of a future where the regulations are washed away and the corporations are finally free to sail above us, you don’t have to dream about some sci-fi dystopian Blade Runner/1984 bullshit. You can go to Shenzhen tomorrow. They’re making your crap that way today.”

When confronted with accounts like these, most brands and retailers do some version of a basic dance: First, deny the facts and second, disclaim responsibility for them.

Daisey: “Do you really think Apple doesn’t know? In a company obsessed with the details, with the aluminum being milled just so, with the glass being fitted perfectly into the case, do you really think it’s credible that they don’t know? Or are they just doing what we are all doing? Do they just see what they want to see?”

Daisey’s question uncomfortably implicates not just Apple (and Sony, Dell, etc.), but all of us who are addicted to our smart phones, who can’t get enough of the next killer app, who have deified Steve Jobs.

But things are changing, as you may have seen in splashy press releases.  Conditions are Foxconn are improving.  For Foxconn did what any compassionate employer would do: it forced its employees to sign a pledge promising that they would not commit suicide.  Do you feel better now?

And just last week, Apple announced a new era of “even greater transparency into [their] supply chain.”  They have become the first tech company to join a monitoring entity, the Fair Labor Association.  The FLA, however, is notoriously industry-friendly; when pushed to do something voluntarily, manufacturers invariably choose the FLA over the tougher, more worker-friendly Workers’ Rights Consortium.

Monitoring – even as half-hearted as this attempt seems to be – is a fine thing, but is hardly sufficient.  What is needed is for workers to have a real voice on the job.  There are unions in China, but the main union is a front for the Communist Party, and essentially acts in concert with the employers.  (With some shameful sounds of approval from a U.S. labor leader.)

And other unions – called “secret unions” – are illegal.  If you affiliate with them, you risk going to jail – or worse.  If you try to avail yourself of legal remedies – like complaining to the labor board about unpaid mandatory overtime – you wind up on a blacklist: the labor board simply compiles the names of complainants and distributes the list to employers with the note that “the following is a list of troublemakers. If any of them are found in your employ, dismiss them immediately.”

In this context, it is probably fair for us to realize that we are the world’s 1%.  It’s also hard to know what we –– can or should do about any of this.  (Although I look forward to your comments!)  It’s pretty overwhelming.  And distant.  And not many of us have the time to become experts in trade policy.  So perhaps the most depressing part of this whole endeavor is that simply becoming aware of what’s going on – and understanding our own complicity – may be among the more radical things we can do.

*Editor’s Note: This American Life issued a retraction of this story March 16, claiming that it was “partially fabricated.” Show host Ira Glass announced his March 18 program would ask Daisey “why he misled This American Life during the fact-checking process.”

The One Percent Are Different From You and Me