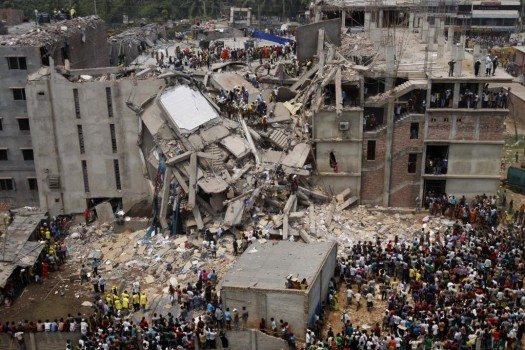 [Frying Pan News Note: A New York Times piece posted last night by Steven Greenhouse — and referenced below — revealed that “newly found documents indicate that apparel had been produced for Walmart at one of the operations in the factory building that collapsed last month.”]

The most dangerous job in the world, outside war zones, isn’t that of an undercover police officer or a firefighter or a bullfighter or aerialist. It’s sewing garments — particularly in Bangladesh.

The death toll in the April 24 collapse of Rana Plaza has topped 1,100 and continues to rise. But Rana Plaza is merely the most deadly of an unbroken string of preventable disasters that have plagued garment manufacturing in Bangladesh, the world’s second-largest exporter of clothing, behind only China. It’s not even the most recent preventable disaster: Since the cataclysmic building collapse, several fires have swept other Bangladeshi factories, the most recent of which, last week, took eight lives.

“That fire began on the lower floors, but people died on the floors above,” says Scott Nova, who heads the Workers Rights Consortium, the organization that has spearheaded the global fight to make garment factories safe. “Those people would have had no trouble getting out unharmed if they could have walked into stairwells protected by fire doors. But the factory had open staircases that became a chimney, funneling toxic smoke to the upper floors. And most of the factories in the country are similarly structured.”

Some of the major retailers and brands that had boasted of their safety inspections before the Rana collapse have since admitted that while their inspectors looked for things such as fire extinguishers, they didn’t check the structural soundness of the buildings. Noticing whether stairwells are open or closed, however, doesn’t require an engineering degree. Making sure that factories have staircases sealed off by fire doors simply wasn’t a priority for the global retailers who went to Bangladesh because it was the cheapest place on the planet to make their goods.

In the wake of Rana, that’s begun to change. Under pressure from unions and anti-sweatshop activists in their home countries, the European retailers and brands with the biggest presence in Bangladesh agreed this week to a plan under which they would pay for renovations to make their factories safe and independent inspections that would keep them that way. The retailers include H&M, which is the biggest buyer in Bangladesh, Carrefour and the British-based firms Tesco and Primark.

Thus far, most U.S. firms have declined to sign on. Holdouts include Walmart, which ranks just behind H&M in the volume of clothing produced in Bangladesh; Gap; JC Penney and Sears. The only U.S. company to join the accord — and it signed on to a version that predated last month’s disaster outside the Bangladeshi capital — is PVH, the parent company of Tommy Hilfiger, Calvin Klein and Izod.

The way PVH was persuaded to commit its resources to ensuring the safety of the workers who make its clothes is instructive. Last year, ABC News broadcast a story from investigative reporter Brian Ross documenting that workers making clothes for the Tommy Hilfiger label were locked in a factory that caught fire in 2011, killing 29. Ross then had the bad manners to confront Hilfiger himself — on camera — with this news at a New York fashion show. After his initial shock, Hilfiger looked into the matter and decided that his company would fund the factory safety reforms that other U.S. retailers and brands have continued to duck.

It’s no sure thing that if Ross similarly confronted, say, Alice Walton and the Walton family and asked them to spend a smidgen of their fortune, which Forbes reports is $116 billion, on lifesaving reforms for the workers who make them rich, that he would get a response as positive as Hilfiger’s. Walmart has touted the greening of its retail outlets, but it has refused to commit to paying for safer factories for its workers.

The problem here isn’t Bangladesh. Garment work has historically led to mass death for young women — the 1911 Triangle Shirtwaist fire in New York’s Washington Square took 146 lives — when marketers and manufacturers have been able to elude safety standards in pursuit of higher profits. Walmart, though, has taken this problem to a new level. By depressing wages at its retail outlets and at every point along its supply chain, it has helped create an underpaid buying public compelled to shop for discount clothing. Everyday low wages create a demand for everyday low prices — a downward spiral that hits bottom in the deathtraps of Bangladesh.

Hilfiger recognized that at the end of the garment supply chain, there were human beings whose safety he was responsible for. Whether the Waltons and their peers are capable of such rudimentary displays of humanity remains to be seen.

(This column first appeared in the Washington Post and is republished with permission.)