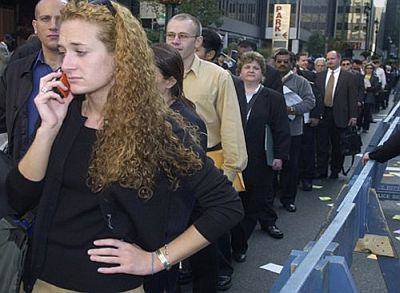 Why is this recovery different from all other recoveries?

Many of the reasons are widely known: Rebounding from a financial crisis takes an excruciatingly long time; the huge decline in housing values has reduced Americans’ purchasing power; large corporations are making do with fewer employees — at least, in this country.

But what really sets the current recovery apart from all its predecessors is this: Almost three years after economic growth resumed, the real value of Americans’ paychecks is stubbornly still shrinking. According to [April 5th’s] Bloomberg Economics Brief, “the pace of income gains is well below that of the past two jobless recoveries and real average hourly earnings continue to decline.”

The Bloomberg report cites one reason for this anomaly: Most of the jobs being created are in low-wage sectors. According to Bloomberg, fully 70 percent of all job gains in the past six months were concentrated in restaurants and hotels, health care and home health care, retail trade, and temporary employment agencies. These four sectors employ just 29 percent of the country’s workforce but account for the vast majority of the jobs being created.

Among the economy’s better-paying sectors, construction still has an unemployment rate of 17 percent. Given the persistence of mass foreclosures, the continuing decline of housing values and Republicans officeholders’ reluctance to allot public funds even for paving roads, construction isn’t coming back anytime soon.

Hiring has picked up in manufacturing, but manufacturing wages are falling nonetheless. The standard wage at Midwestern auto factories has declined from around $28 an hour to $15 an hour for workers hired during the past two years. New hires have their hourly wages contractually capped around $19, no matter how long they may work for the automakers. But the plunge in wages hasn’t stopped at $15. At a new high-tech locomotive plant in Muncie, Ind., Caterpillar is hiring workers at $12 an hour.

That’s $24,000 a year — let’s say $30,000 with overtime, if there’s overtime — to assemble some of the most sophisticated machinery that this country builds. That’s not the kind of money you can send your kid to college on, or use to shop for much more than your daily bread.

So, if not to workers, where’s the money going? Of the companies that comprise the Standard and Poor’s 500, net income (chiefly, their profits) has risen 23 percent since 2007, the last year of the bubble, the Wall Street Journal reported this week. Their cash reserves have increased 49 percent during that time — in large part because they’re neither hiring in the United States nor boosting their workers’ incomes. Workers are producing more: “In 2007, the companies generated an average of $378,000 in revenue for every employee on their payrolls,” the Journal reported. “Last year, that figure rose to $420,000.” But workers are seeing none of that increase in their pay.

Profits and dividends are up and wages are down — which is why, as University of California economist Emmanuel Saez has documented, all income growth in the United States in 2010 went to the wealthiest 10 percent of households, and 93 percent to the wealthiest 1 percent. Profits and dividends are up largely because wages are down, as JPMorgan Chase chief investment officer Michael Cembalest has documented. “U.S. labor compensation,” Cembalest wrote in a newsletter to the bank’s major investors last year, “is now at a 50-year low relative to both company sales and U.S. GDP.”

Why is this recovery different from all other recoveries? Because American workers have lost all their bargaining power. That’s a function of ongoing high unemployment levels, but not only that. The 1981-82 recession had even higher rates of joblessness, but wages didn’t continue to decline during the ensuing recovery. There have been two fundamental alterations in the U.S. economy since Ronald Reagan was president, however. First, American multinational corporations now locate much of their production abroad. Second, with the rate of private-sector unionization down to a microscopic 6.9 percent, workers have no power to bargain for higher pay. Employers can serenely blow them off — and judging by the data, that’s exactly what employers are doing.

This recovery differs from its predecessors because it is concentrated among the affluent, and almost entirely among the very rich. Until we address the imbalance of power in the U.S. economy, and until Americans regain the clout that their parents and grandparents had to compel employers to share their revenue more equitably, the difference between our recoveries and our recessions will grow harder to discern.

(Harold Meyerson is the American Prospect’s editor-at-large  and a columnist for the Washington Post, where this post originally appeared April 10.)

A Union Buster Strikes Out