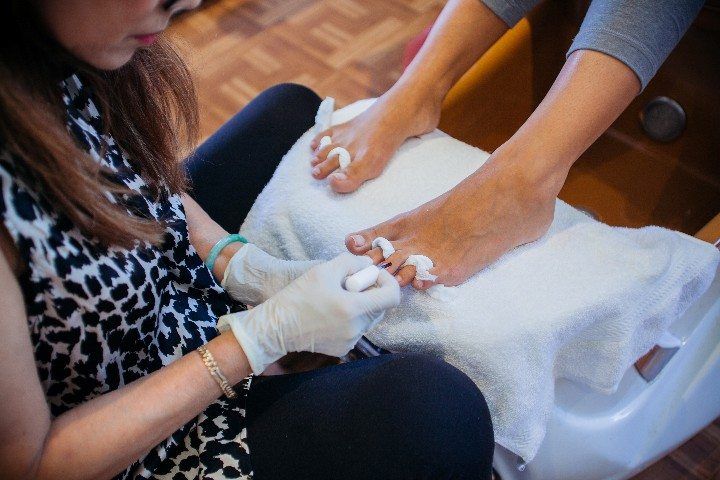 All Photographs by Joanne Kim

As late summer temperatures peak, so does customer volume at nail salons. When it comes to spa services, many customers expect luxury at a low price, and nail salon workers and owners must navigate complicated territory. It is an economically booming territory but replete with an often exploited immigrant work force, low wages, dangerous chemicals and difficult patrons. Change, though, is gradually coming as some spas move to healthier practices, and advocates seeking better conditions and wages for salon technicians have emerged.

Kathylynn Do at Santa Monica Beach Nail Spa welcomes the seasonal rush. “In the summer, I have more business,” she said. “It’s a tourist area.” 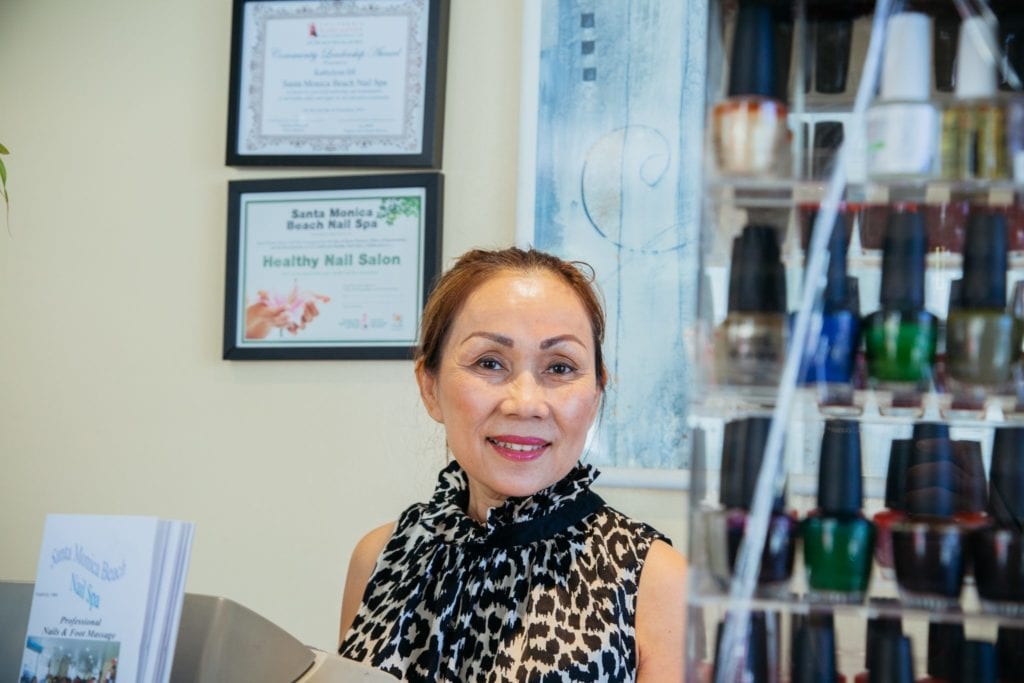 Kathylynn Do, owner of Santa Monica Beach Nail Spa, learned about the possible health hazards to her employees due to chemical exposure from the California Healthy Nail Salon Collaborative.

At her shop a few blocks from the Pacific Ocean, she juggles a lot of walk-ins. Do launched her business with a $7,000 loan from her sister while she was going to school and raising a couple of kids. As the law requires, she pays workers minimum wage plus tips — an amount left up to the customer. Sometimes the clients are from Europe, where tipping is not a custom, she said. That means nail workers get stiffed. (Not all customers do the math on what a 15 to 20 percent tip on the spa’s $28 manicure-pedicure should be — more than $4 and, at 20 percent, more than $5.)

A low-road approach to nail-salon pricing and payment dominates the business and makes wage theft common. Workers are on the clock but uncompensated with minimum wage

Sometimes customers can be a hassle, like the one who recently walked in and demanded service on the spot while those with appointments were being tended to. And there are mean Yelp reviews to contend with.

A block down the street from Do’s shop at Organic Nails and Spa Studio, the atmosphere is more high-end – slightly fragrant, natural light, soothing Spotify music stream. Aesthetician Amy Pham recently treated a client to a hot rock massage on her hands, arms and feet, and then stopped to display organic and vegan products to a visitor. Pham began her career in Boston more than 15 years ago. “I worked in a lower end spa—a very chemical spa,” she said. “At night, the owner had to hire a bouncer for security at the door. A bad location.” Customers paid $5 or $7 for service, and technicians were expected to take what was offered. The signature mani-pedi at Organic Nails and Spa Studio where she works now is $48 and includes a hot rock massage.

Pham and Do are part of the spectrum that makes up the $8.5 billion nail care industry in the United States. Nails Magazine credits social media and new nail technologies for industry expansion. Nail art is wildly popular on Instagram and Pinterest. Gels and other methods make mani-pedis last longer and contribute to the demand.

A 60-40 split between spa owners and technicians is a common industry practice. For an hour-long $23 mani-pedi, this could work out to $9.20 to be shared between two workers.

Mani-pedis became more accessible as prices dropped, he told Capital & Main. “It makes it more affordable — people who used to go only on a special occasion can now go regularly.”

Technicians are supposed to receive minimum wage, but some owners treat them as contractors instead of as employees. And, while fee rates vary from spa to spa, a 60-40 split between owners and their technicians is a common industry practice. For a $23 mani-pedi, which can take two salon workers about an hour, this could mean that the technicians will share $9.20. They could get more if the customer knows to tip, but many don’t. 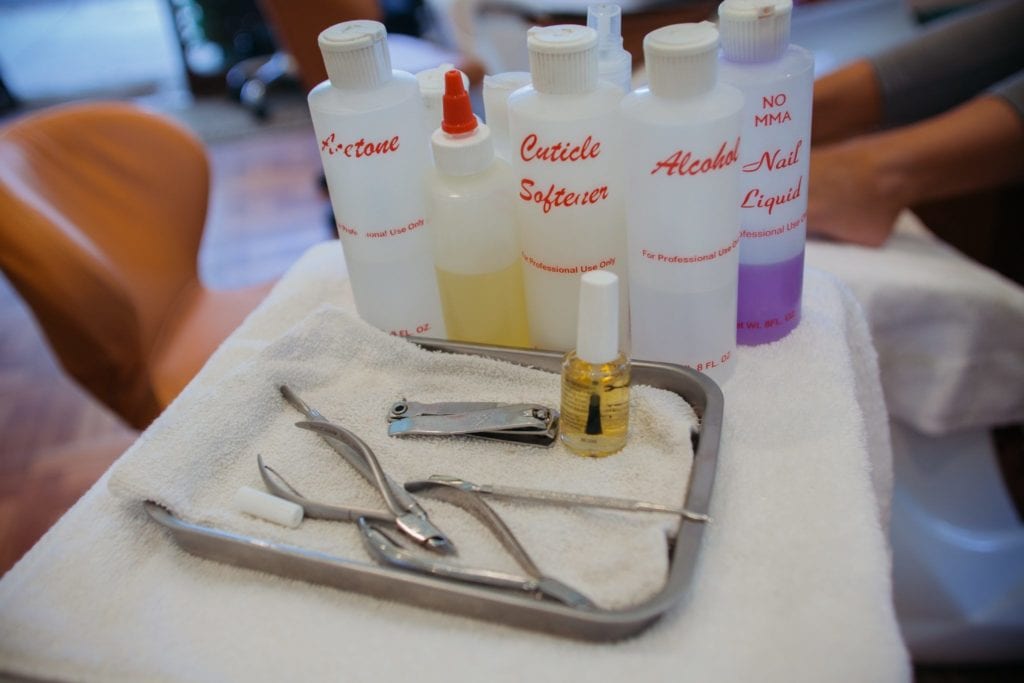 Santa Monica Beach Nail Spa strives to use chemicals that are as nontoxic as possible. All employees use gloves to ensure that there is no contact with their skin.

When Pham worked in what she called “a very chemical spa” in Boston, she saw one co-worker die of lung cancer at 35 and another miscarry.

Do was convinced to replace her products by a Healthy Nail Salon Collaborative organizer who knocked on her door. It was a financial challenge and she got complaints when she raised prices by a dollar. “One dollar only,” she said. “Now I have a healthy nail salon. I buy something good for your nails. It’s not a big deal — it’s good for you. It’s good for me. It’s affecting your health, it’s affecting mine.”

In Santa Monica, where residents are health-conscious and skew toward higher-income brackets, a Healthy Nails certification hanging in the shop can boost business — and did for Do’s salon.

But the Santa Monica shops are not typical. The low-road approach to pricing and payment dominates and makes wage theft common. Workers are on the clock but uncompensated with minimum wage — a ubiquitous practice, said John Trang, an attorney with Asian Americans Advancing Justice. Trang represents plaintiffs suing the Tustin Nail Spa, a business that has changed ownership several times while operating under the same name. The suit, first filed in 2015, alleges failure to provide wages for hours worked or for overtime. It also says the salon did not offer times for breaks and meals. Throughout the industry, Trang said, many shop owners don’t understand that their workers are not contractors to be paid by the job but are entitled to a minimum wage. At other times owners overlook minimum wage requirements, and the technicians are unaware of their rights or hesitate to speak up.

The nail industry in California is based on small shops run by Vietnamese families, said Trang, whose mother is a retired nail technician.

Employees need and want the jobs, Trang said: “How many industries can one think of where you might be an immigrant woman, who speaks very little English—and you don’t have a lot of upfront costs, you don’t have get an education for three, four years like nursing, you can do a license, take some classes, put in some money, maybe a few thousand for some courses and just jump in and start working?”

“Folks put up with exploitation,” Trang added. “They know they are being screwed over but they put up with it. And that’s gendered. There’s an immigration aspect to it. There’s a racial aspect. And it’s unfortunate.”

Notions of what is appropriate in a workplace are also factors in salon operations. Trang’s mother regularly called her employer ”Big Sister” or “Auntie,” he said. “There’s a kind of honorific in many Asian languages — this idea that there is a familial aspect,” he said. “That makes it harder to bring a legal claim or even raise workplace concerns.” But the close relationships in a small shop and the sense that everyone is in the trenches together can level the playing field a bit to make it easier to speak up, he said.

Few cases have been filed against salons for abusive practices or wage issues, according to Trang’s research. “No more than 20, 25 — tiny given the industry has been around for decades,” he said.

With spa services in high demand, advocates say, the challenge is to assure salon work is a good job, fairly compensated and doesn’t endanger workers’ health.

Liou and Trang represent two currents of a California movement to create justice in the nail salon industry — to protect health and win fair wages. 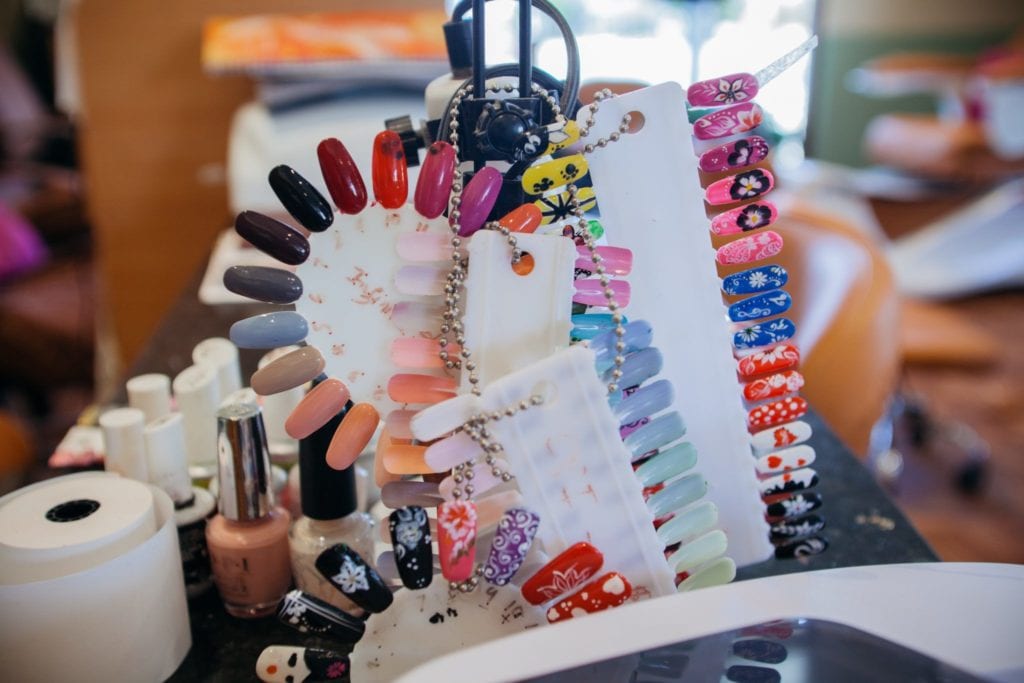 Two pieces of legislation went into effect this year to require posting of information in multiple languages to inform nail salon workers about labor laws (including spelling out the difference between contract workers and employees.) A third measure supports guidelines for local governments to encourage local healthy nails programs like the one in Santa Monica.

Liou said the initial legislative push on the health front was to forbid the toxic trio, but “banning that thing is a huge lift.” One prominent cosmetics company even flew in staff who distributed beauty goodie bags in the legislature to oppose a bill blocking the chemicals, she said.

The approach is both legislative and local. The California Healthy Nails Collaborative has formed local partnerships to establish healthy nails programs in Santa Monica, the City and County of San Francisco, and San Mateo and Santa Clara counties.

The push for nail worker protections is also robust in New York.

The article broke amid a steady worker rights push from the New York Healthy Nail Salons Coalition led by the New York Committee for Occupational Safety and Health and Adhikaar, a human rights organization that works closely with the Nepali community, many of whom turn to work in the salon industry in New York.

“People know they are owed,” she said. “With a cash economy — even if they have legal status, they are not getting the cash from their tips or they may not be getting the amount reflected on their checks. It’s a tip economy. A lot of folks work on a cash basis. It varies from salon to salon.”

Like the California Healthy Nail Salon Collaborative, Adhikaar emphasizes working with salon owners and staff. Adhikaar approached owners to put up posters in shops to inform workers — and owners — of workplace rights.

The Adhikaar posters also let consumers know they have a role in a just workplace, Benjamin said. “We want people going to nail salons to know that workers have their rights too,” she said. “Even the basics of tipping. A five percent tip is not cool. A 10 percent tip is not cool. Twenty percent should be standard. It’s that type of education that’s needed.”

Trump Poised to Repeal Popular Federal Jobs Initiative, With Disproportionate Impact to Be Felt by Minorities