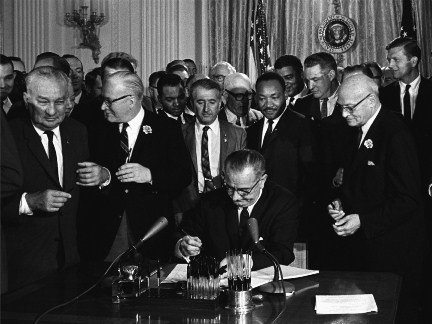 In an action that already feels like ancient history, Congress voted earlier this month to avoid the “fiscal cliff.” While much remains to be settled, the revenue side of the issue got resolved because 84 House Republicans joined 172 Democrats to support the solution negotiated between the President and the Senate. In some ways, such bipartisanship was a moment of déjà vu from a time, nearly 50 years ago, when two pivotal civil rights bills were being considered. Then, Lyndon Johnson was President and both houses of Congress were in the hands of Democrats. Martin Luther King was in the streets. The Student Nonviolent Coordinating Committee was registering voters. The 1964 Civil Rights Act and the 1965 Voting Rights Act were passed by Republicans joining Democrats to move the President’s legislation into law.

In both circumstances – today, as then – it was one party’s Southern flank that refused to go along with its leadership. But in the 1960s it was the opposite party in charge there than now. In the civil and voting rights instances, the South was solidly Democratic. In the fiscal cliff situation, the South was solidly Republican. In both cases it was the representatives from the “Solid South” who opposed the President, but with different party labels. How did that happen?

When I was coming of age, the conventional wisdom about the 1960 election, in which John Kennedy beat Richard Nixon by a shard and gained the Electoral College by votes from Illinois, two opinions were common: Nixon looked terrible in the TV debates, and in Chicago the Democratic machine resurrected a lot of dead people to vote. Great myth. Bad history.

Chicago voted for Kennedy and he carried Illinois because black people not only turned out, they went big for the Democrat. Today that would be expected, but not in that era. Then it flew under the radar of white media, because before 1960, African Americans voted Republican. In 1956, 60 percent of African Americans voted for Eisenhower. Most were Republicans, including Martin Luther King, because Lincoln was a Republican and he won the Civil War and ended slavery.

But in the 1960 election something different happened. The Civil Rights movement was in full force. The Montgomery Bus Boycott had poked a hole in Jim Crow. White newspapers barely covered these events, but the black community was very aware. Late in the campaign season, Martin Luther King fell ill and was hospitalized in Atlanta. This matter was not major news, except in African American neighborhoods across the country, especially in Chicago where huge numbers of Southern blacks had moved in the Great Migration north.

During the last days of the campaign, Kennedy called King in the hospital. He didn’t go there. He didn’t stand bedside. He called him on the phone. The campaign secretly put this story into a brochure with a blue cover and quietly delivered a million copies of the “blue bomb” to thousands of African American churches on the Sunday before the election. Those voters cast 70 percent of their ballots for Kennedy – the margin of victory. When that election eventually led to a civil rights bill, African Americans became Democrats by a margin of 30 to 1. By 1968 Nixon recognized that voters were switching parties, and through his campaign’s Southern Strategy of pandering to white anger, the white South became Republican.

The South may have flipped parties but it remains conservative. Last month the governor of South Carolina – the home of John C. Calhoun, the South’s arch-defender of slavery and white privilege – appointed an African American to a vacant U.S. Senate seat. Of course, he is a Republican, and a Tea Party Republican. He is also the only African American in the Senate, and the first from the Deep South since Reconstruction. Calhoun must be turning in his grave. On the other hand, if you were looking for consistency, you would not look to an American political party.