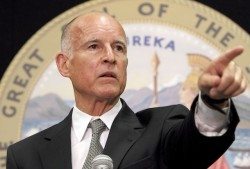 Among the pile of bills that the legislature passed at the end of their session and delivered to Governor Jerry Brown’s desk were some significant ones for workers, health, education and the environment. The deadline for Brown to sign the bills was midnight Tuesday.

California became the first state to ban single use plastic bags, the formerly ubiquitous grocery bags that have a special talent for working themselves into waterways, beaches, and sensitive environmental areas.

The statewide ban follows – and replaces – dozens of local bans, including Los Angeles and San Francisco. Senate Bill 270, which the Sacramento Bee called “one of the most contentious bills of 2014,” was authored by state Senators Alex Padilla (D-Pacoima), Kevin de León (D-Los Angeles) and Ricardo Lara (D-Long Beach). The latter two joined as authors and helped solidify a majority in the legislature after ensuring that economic incentives would be available to help companies and workers impacted by the change.

The reality,” Padilla told Capital & Main’s Bill Raden last month, “is [that] for communities like mine plastic bags floating in the streets, in our parks, in the storm drain channels, is problematic. I come from local government, so I know what the cost is to cities and counties to try to collect plastic bags, to try to recycle plastic bags — it’s a very inefficient process.”

Those who think they will miss the plastic bags can take heart – the remnants of bags already working their way through the environment will still be around next century.

Local governments will gain some options for infrastructure projects that had been lost with the old community redevelopment agencies. State Senator Jim Beall (D-San Jose) proposed SB 628, which will expand the Infrastructure Financing District law so that local agencies can implement tax increment financing without approval from voters (though issuing bonds would still require a 55 percent vote). The new system has been characterized as a partial replacement for the CRAs.

The Healthcare Workplace Violence Prevention Act, also introduced by Padilla, will require hospitals to adopt plans to prevent and mitigate violence. The California Nurses Association, who sponsored the SB 1299, cite U.S. Bureau of Labor Statistics data showing that healthcare workers are five times more likely than average to be the victim of workplace violence.

Higher education in California could change thanks to SB 850, allowing community colleges to award bachelor’s degrees during a trial period beginning with the 2017-18 school year. According to the Sacramento Bee, 21 other states offer community college baccalaureates. State Senator Marty Block (D-San Diego) and supporters hope that the new programs will improve accessibility.

New Law to Inform Californians of Dangerous Chemicals in Furniture