United Farm Workers members and supporters begin the “March for the Governor’s Signature” in Farmersville, CA on Sept. 22 in support of Assembly Bill 616. Newsom vetoed the bill the same day. All photos by David Bacon.

Almost before the farmworker voting rights march set out for Sacramento last week, their 217-mile pilgrimage was cut short by the governor’s veto of the bill they supported.

The march sought to press Gov. Gavin Newsom to sign a bill that would have brought farmworker union elections into line with the voting process used in California general elections. Instead, the governor refused to allow changes in a 50-year-old election process that workers say favors growers — changes that he has advocated for in general elections, like the recall vote he just overcame.

“Why was the absentee ballot process good for the governor when he depended on it to defeat the recall, but not good for farmworkers?” asked Teresa Romero, president of the United Farm Workers.

AB 616 would have made it easier for farmworkers to vote to unionize by allowing them to fill out and mail ballots as absentees, just as voters do in a general election. Under AB 616 a union could distribute ballots to workers at home, which they could mail back to California’s Agricultural Labor Relations Board in envelopes that keep the vote confidential, just like voters can do in any political election.

“Why was the absentee ballot process good for the governor when he depended on it to defeat the recall, but not good for farmworkers?”

Newsom, in a veto statement, said he “has worked tirelessly to protect and support workers across California.” However, he added, “This bill contains various inconsistencies and procedural issues related to the collection and review of ballot cards.” No specifics were given in the message or beforehand to the union and the bill’s sponsors.

Presently, workers are usually forced to vote in polling places on the grower’s or company’s property. Voting by absentee would make it possible for farmworkers to cast their ballot away from foremen and anti-union consultants.

Currently, when workers want to organize a union, they have to sign cards that authorize the union to represent them. The union then presents them to the Agricultural Labor Relations Board. If the board decides a majority of the grower’s workers have signed, and other requirements have been met, it sets up a polling place, typically on company property. Workers have to cast their votes there, in favor or against the union. Xico Garza and Paulina Rodriguez lead UFW members and supporters in a prayer to the four directions at the start of the march.

It is a very high-stress process. Before the vote, growers often hire union busters to dissuade workers all day from joining up. Foremen can legally pull workers aside during work hours, giving each a one-on-one talk to pressure her or him to vote as the grower wants. Since the Supreme Court ruled in June (Cedar Point Nursery v. Hassid), union organizers can no longer go on a grower’s property during non-work time to counter false statements or threats.

Organizing a union in the face of these obstacles is hard and risky for workers. Over the years, the Agricultural Labor Relations Board, which administers California’s farmworker unionization law, has held hundreds of hearings. An endless parade of workers has testified to threats, firings and other illegal actions by growers and crew bosses — all intended to increase fear.

Just as voting by absentee ballot is easier and less stressful in a general election, voting at home would make it possible for farmworkers to cast their ballot away from the pressure. Under AB 616 a union could distribute ballots to workers at home, which they could then fill out and mail back to the board in envelopes that keep the vote confidential, just as anyone in California can do in a general election.

Agribusiness has fought laws giving farmworkers a legal process for organizing unions since agricultural and domestic labor was excluded from the National Labor Relations Act in 1935.

The governor’s objections make little sense to the workers and their advocates. The existing process outlined in the Agricultural Labor Relations Act allows a union to request a list of employees by giving the board authorizations signed by 10% of the workforce. Then the union can either request an election on the grower’s property, as it can now, or it can distribute ballot cards to workers, allowing them to cast their vote at home. This is the same procedure that gave Biden his victory over Trump in many states, one that right-wing Republicans are now trying to outlaw in Texas and elsewhere.

The Agricultural Labor Relations Board must monitor the validity of the signatures on the ballot cards it receives, and must hold a hearing if there are accusations of chicanery. Voter coercion or falsifying signatures is already illegal.

As farmworker advocates see it, Newsom’s veto is a self-serving bow to California’s $50 billion agricultural industry as he faces reelection next year and, beyond that, may run for the Oval Office — both of which require big-money donors. Among his anti-recall donors, along with unions, are tech moguls Eric Schmidt, Reed Hastings, Priscilla Chan and Jerry Yang, to whom unions are anathema.

As San Francisco mayor, Newsom did play an important role in helping hotel workers win their lockout and strike in 2004, but his labor record is more mixed than his veto message claims. Workers have no union in Newsom’s Plumpjack restaurant and Napa Valley winery. Business lobbyists were well represented at the lobbyist’s birthday party Newsom attended, maskless and indoors, at the swanky French Laundry restaurant at the height of the pandemic last November. 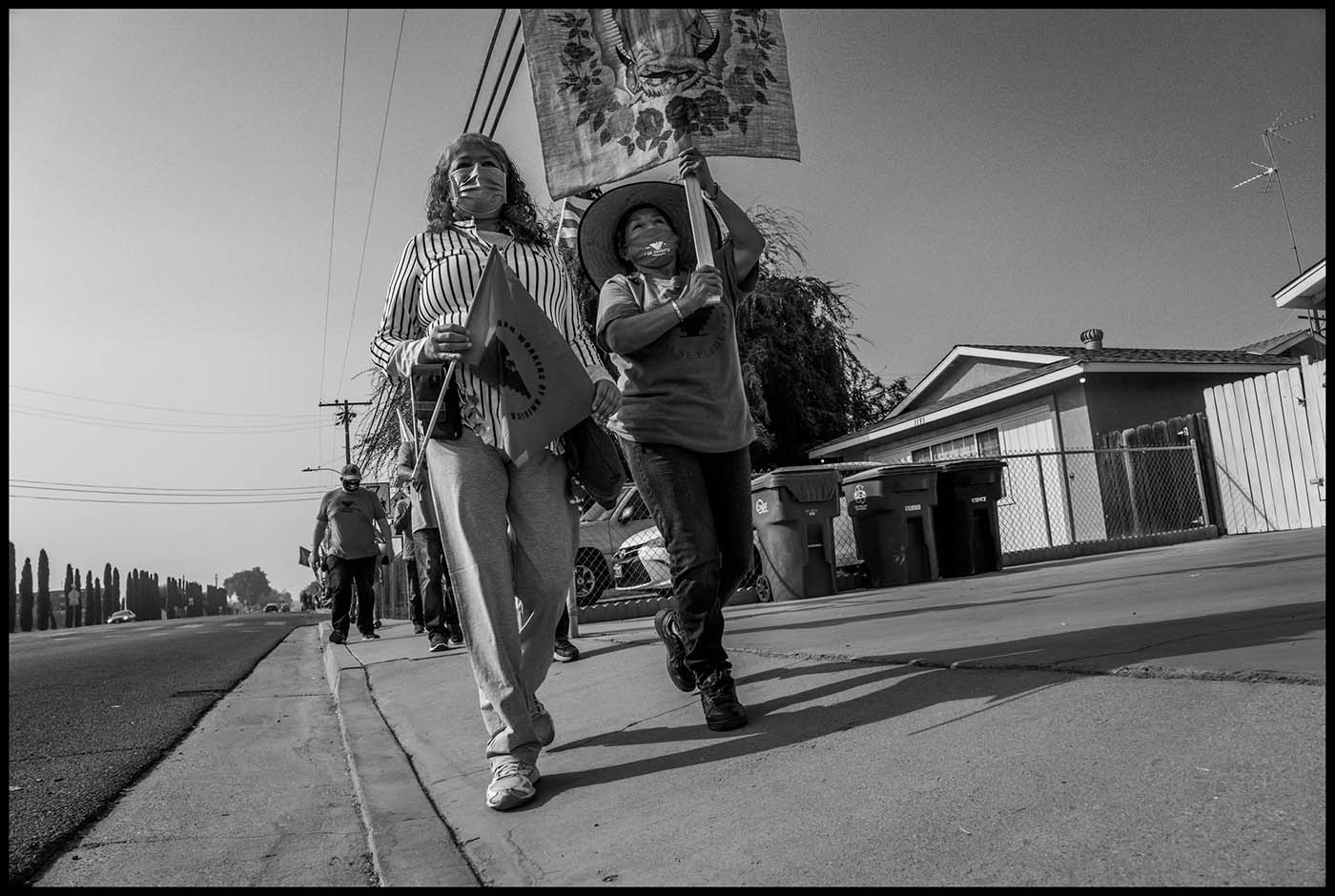 His misstep angered millions of locked-down Californians and helped put the recall petition on the ballot. Farmworkers were not invited, a fact the United Farm Workers dramatized last week in a protest of his veto outside the French Laundry.

In the weeks before Newsom fended off a recall on Sept. 15, UFW’s Romero had asked to meet with him to talk about the bill. He refused. “We didn’t want it to become an issue in the recall campaign, which farmworkers were committed to winning,” she said, “so we didn’t say anything publicly, even though we thought he should have been willing to hear our reasons for it.”

This summer and fall, AB 616 easily passed the state Assembly and Senate despite fierce opposition from growers. The California Chamber of Commerce called it a “job killer.” Presumably, if workers organize more easily, a larger and stronger union might push wages up — not a prospect agricultural businesses favor.

Voting rights for farmworkers came with the passage of the Agricultural Labor Relations Act in 1975, after decades of conflict in California fields.

Agribusiness has fought laws giving farmworkers a legal process for organizing unions since agricultural and domestic labor was excluded from the National Labor Relations Act in 1935. One result is that less than 1% of farmworkers belong to unions today.

After the recall election was over, Newsom continued to sit on AB 616. Finally, the union and its supporters decided to start walking to Sacramento to demonstrate their commitment and ask him to sign it. The march was due to take 19 days, following in the footsteps of the original farmworker march to Sacramento in 1967, during the famous Delano grape strike that marked the beginnings of the UFW.

Sen. Alex Padilla, appointed by Newsom to fill Vice President Kamala Harris’ seat, supported the bill. “As Secretary of State,” Padilla said in a written statement, “I was proud to support and implement changes in state law to make it easier for people to exercise their right to vote. Farm workers should have similar opportunities as they exercise their longstanding right to vote in a union representation [election].”

Voting rights for farmworkers can’t be taken for granted. They came with the passage of the Agricultural Labor Relations Act in 1975, after decades of conflict in California fields. Last week’s farmworker march sought to remind the governor of that history by starting in Farmersville, site of one of the key conflicts that led to the creation of the United Farm Workers union. Xico Garza walks at the head of the march burning sage. UFW President Teresa Romero and activist Lourdes Cardenas walk behind him.

In 1965 anger over racism and exploitation grew hot in Tulare County and boiled over when farmworkers living at the Linnell labor camp in Farmersville decided to stop paying rent. Residents lived in shacks built for Dust Bowl migrants. They were so hot during the summer that families would salvage rugs from the dump, douse them with water, and spread them on the roof to cool off the rooms below. There were no separate showers for women. Gilbert Padilla, one of the strike organizers, called it “a very disgusting site.”

Camp residents won their strike. And Gilbert Padilla (now a revered veteran organizer) went on to help lead the Delano grape strike later that year. Voting rights came a decade after that — in 1965 farmworkers had no right to vote for a union in the fields. Even in general elections voting procedures were restricted, and most farmworkers didn’t or couldn’t vote. The idea that you could register easily at the DMV, or that every voter would be mailed a ballot to send back at their convenience, would have seemed utopian.

Today those changes in general election procedures are the norm in California, intended to make voting as easy as possible, and to encourage the maximum turnout. Gov. Gavin Newsom owes his victory in the recent recall election at least in part to the increased turnout those changes made possible. Indeed, on Sept. 27, Newsom signed a bill to make mail-in ballots — a pandemic-era safety measure — permanent.

On Wednesday, Sept. 22, 25 workers and their supporters who’d agreed to walk the whole way gathered in a Farmersville church parking lot. After a prayer to the four directions, led by dancers Xico Garza and Paulina Rodriguez, and accompanied by dozens of supporters, the marchers set off. A few hours later the word came down — Newsom had vetoed the bill.

Assemblywoman Lorena Gonzalez, the San Diego Assemblymember who authored AB 5 to end misclassification of gig workers, tweeted her disappointment at the veto of AB 616, which she co-sponsored. “I’m truly devastated that @GavinNewsom vetoed the most important union organizing bill of the year. Denying Farmworkers the right to organize and join a union in the same manner we allow all public sector workers in CA to do so is abhorrent.”

“To me, the reasons he gave for the veto have no value,” Romero told Capital & Main. “He benefited from the voting choice Californians have to beat the recall. But he thinks farmworkers are not equal to him.”