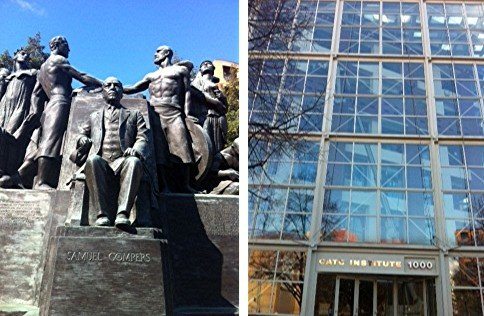 What do 19th century labor leader Samuel Gompers and the virulently anti-union think tank, the Cato Institute, have in common? More than you might imagine. They actually stare out at each other across Massachusetts Avenue in Washington, D.C. Or rather, the beautiful monument of Gompers and Gompers Square sit directly opposite Cato’s towering, modern offices, where the Koch brothers regularly plot strategy.

I discovered this humorous anomaly while moving into my temporary apartment around the corner, on 11th­­ Street and Massachusetts Avenue, as I prepared to begin a three-month fellowship at Georgetown University — and a project that will look at ways to link to federal policy our efforts to build a new economy for all in Los Angeles. More on that later.

In memory of Gompers, I decided to create an imagined dialogue between the Cato Institute — now embroiled in an internal brouhaha involving the Brothers Koch – and their ever present bronze nemesis, Mr. Gompers. By the way, the following are real quotes from both Mr. Gompers (to be found here)  and the Cato Institute (which can be located here, as well as here).

Cato: Collective bargaining is a misguided labor policy because it violates civil liberties and gives unions excessive power to block needed reforms. To provide policymakers with greater flexibility and to improve government efficiency, states should follow the lead of Virginia and ban collective bargaining in the public sector.

Gompers: Show me the country that has no strikes and I’ll show you the country in which there is no liberty.

Cato: Unions are rapidly becoming an economic anachronism. In recent decades, barriers to international trade and investment have fallen, and domestic markets, including transportation, energy and telecommunications, have been largely deregulated.

Gompers: The trade union movement represents the organized economic power of the workers… It is in reality the most potent and the most direct social insurance the workers can establish.

Cato: The weight of evidence indicates that, for most firms in most sectors, unionization leaves companies less able to compete successfully. The core problem is that unions cause compensation to rise faster than productivity, eroding profits while at the same time reducing the ability of firms to remain price-competitive. The result over time is that unionized firms have tended to lose market share to nonunionized firms, in domestic as well as international markets.

Gompers: The man who has his millions will want everything he can lay his hands on and then raise his voice against the poor devil who wants ten cents more a day.

So, think of Mr. Gompers looking out across Massachusetts Avenue, staring with intensely disapproving, steely eyes as the well-heeled stewards of capital plot to eliminate unions in America . . . Somehow, that gives me comfort.