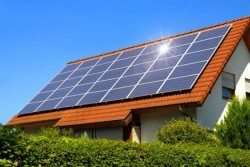 Rooftop solar has many benefits, like reducing the need for dirty natural gas plants that pollute our air. It is also a great tool for growing California’s clean energy economy. In fact, not only does it save individuals money on their utility bills, but it also creates much-needed jobs.

The jobs are not the only way rooftop solar helps the economy. Solar saves consumers money. According to the Vote Solar Initiative, schools and other public agencies have saved $2.5 billion installing rooftop solar. The money saved by schools provides huge budget relief to cash-strapped schools and can be used to purchase new books, computers, and avoid laying off teachers.

What’s not to love about a program that saves schools money, puts Californians back to work, and cleans our dirty air? Well, if you’re a big utility like Southern California Edison, rooftop solar represents a threat to their century-old monopoly. In January, the Edison Electric Institute (a utility funded think tank) reported that the “disruptive challenge” to utilities from rooftop solar threatens their near-term revenue. So it’s no wonder that the utilities are now attacking rooftop solar by pushing for new fixed monthly charges that could not be avoided by conserving energy or using rooftop solar energy.

Two-thirds of California home solar installations now occur in low and median income neighborhoods. It’s clear that families from all walks of life are finding that rooftop solar is the right choice for them. So why can’t big utilities get on board?

Well, they’re not only not okay with that but they are lobbying Latino legislators in Sacramento right now to undermine the economic value of rooftop solar. That’s exactly why Presente and The Other 98%, in partnership with the Sierra Club’s My Generation Campaign, just launched the online petition www.SaveRooftopSolar.com to fight back.

(Refugio Mata is the Sierra Club’s Southwest Region deputy press secretary. His post first appeared on LA Progressive and is republished with permission.)

Related Topics:solar power
Up Next