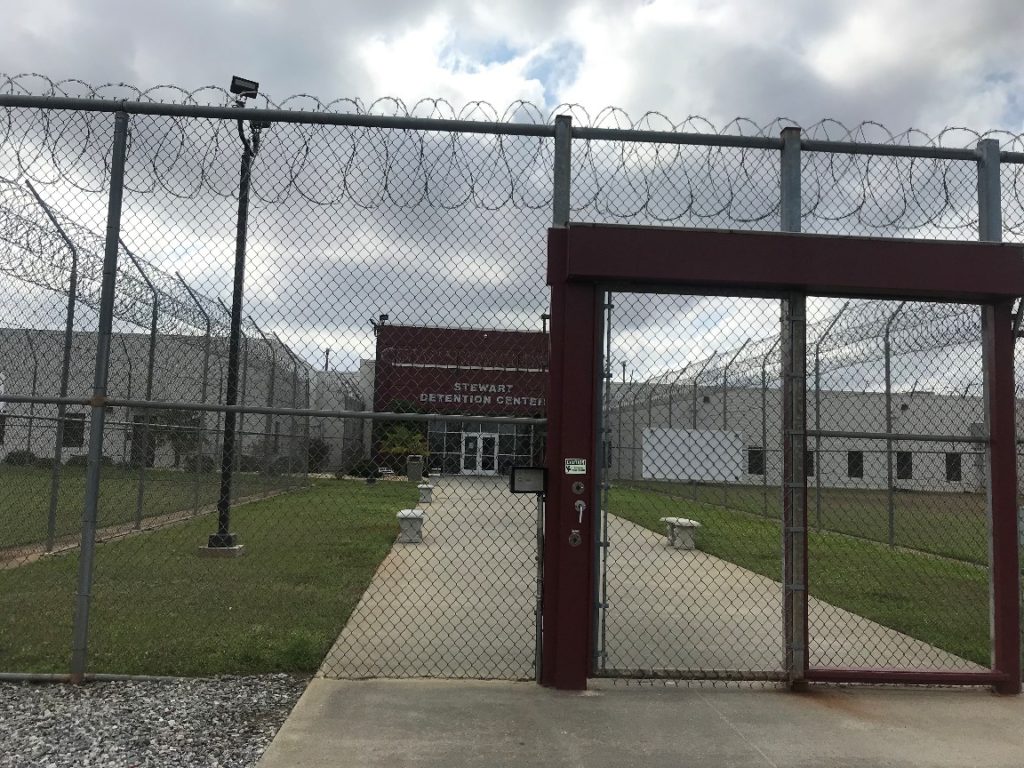 In early October a group of immigrant detainees at the Stewart Detention Center in Southwest Georgia lodged a complaint with the Department of Homeland Security Office of Civil Rights and Civil Liberties concerning “abuses, atrocities, violations of human rights, racism and hate against all immigrants at the detention center.” Stewart is operated for U.S. Immigration and Customs Enforcement by CoreCivic, a private prison firm.

The written complaint followed the previous month’s 18-hour standoff in the center’s recreation yard that ended only when a CoreCivic special operations team deployed pepper-gas projectile to disperse an estimated 40 to 70 men who held shirts that read “libertad” (freedom) and “help,” and had refused to budge. Detainees alleged that the team also used rubber bullets, a charge ICE and CoreCivic said is false.

“The hope obviously is for someone from the outside world to cover it,” said Azadeh Shahshahani, legal and advocacy director of Project South, a group whose work includes immigrant rights, adding that “ICE and the prison corporation have been very good at concealing news.”

Indeed, the protest didn’t receive coverage at the time, and aside from repercussions for the participants – solitary confinement, pepper spray and transfers to other facilities and no outdoor recreation for at least 26 days–it was as if it had never occurred.

At the heart of the detainees’ protest is a claim that they are in prolonged detention and denied bond or parole, even when they qualify for those benefits. The denials of these rights appear to be part of a national trend, said Michael Tan, an attorney with the American Civil Liberties Union, who is currently challenging the ongoing confinement on behalf of detainees under the jurisdiction of ICE field offices in Los Angeles, Detroit, Newark, Philadelphia and San Antonio.

“We are desperate. Many of us came in search of freedom, fleeing persecution and torture by dictators in countries like VENEZUELA, NICARAGUA and CUBA,” the Stewart detainees wrote in an unsigned complaint. “And we find all these abuses that cause us to suffer even more. Many would rather be deported and die in their own countries than die slowly with the mental torture that we live with here.”

Following the protest, Project South wrote to the Georgia congressional delegation requesting an investigation. The organization cited four recent deaths at Stewart and current alleged detainee living conditions, including terrible food, inadequate medical care and violent and abusive treatment of detainees by guards. Based on its interviews with detainees, the organization reported that during the protest one guard yelled and pointed a gun at detainees inside who said they wanted to join. “We were afraid they would make us disappear,” the Project South letter quotes a detainee as saying. A CoreCivic spokeswoman said detention officers are unarmed and called the allegation “patently false.”

In 2017, the Department of Homeland Security Office of Inspector General quoted a CoreCivic worker calling conditions at Stewart “a ticking bomb,” citing issues such as understaffing and drug smuggling by guards.

Apart from the poor conditions at Stewart, the detainee protest highlighted the grim choice that many asylum seekers now face: Return to their countries to face torture or worse, or battle asylum claims while detained in hostile, prison-like conditions for years at a time.

Before Trump took office, the vast majority of asylum seekers didn’t have to make that decision. United States government policy requires ICE to release asylum seekers on parole if they present no danger to public safety or they are unlikely to flee.

Between 2011 and 2013, ICE granted parole to 92 percent of asylum seekers in five ICE field offices, Los Angeles, Philadelphia, San Antonio, Newark and Detroit, according to Tan’s lawsuit. But by 2017 parole grants nearly ground to a halt, and asylum seekers in those regions languished in detention.

“It’s devastating,” Tan said, adding that prolonged detention has coerced legitimate asylum seekers to give up their claims and ask to be deported.

“The people in our class are all people who are found to have legitimate asylum claims. They are all folks who are fleeing persecution, sex trafficking or rape, who came to us seeking safety and in many cases had people in the U.S. they could live with,” Tan said, noting that 99.9 percent have no criminal record.

Last year, Tan won an injunction against the benefits denials that applies only in geographic areas overseen by the five ICE field offices covered by his lawsuit. But some of those offices are not following the order, Tan claimed. Denials are still overwhelmingly high in Los Angeles, for example. The ACLU and the Southern Poverty Law Center also filed a separate lawsuit and won a court order against blanket parole denials in the five Southern states under the jurisdiction of ICE’s New Orleans field office – Alabama, Arkansas, Louisiana, Mississippi and Tennessee.

He believes the government has shunted aside its own policy in favor of the Trump administration’s stated vow to end “catch and release” policies.

ICE is not bound by any court order at the Stewart Detention Center, and it remains difficult for Stewart detainees to win release on parole even when they meet the requirements, said Erin Argueta, an attorney for the SPLC in Lumpkin, Georgia, where Stewart is located.

Argueta noted that stress among detainees at Stewart intensified after the protest, especially because, she claimed, they weren’t allowed to go outdoors for nearly a month.

A detention officer, who asked not to be named in this story, described tension building in the days before the demonstration. A Cuban detainee who had been ordered deported attempted suicide. His life was saved, the officer said, noting that the facility now holds “suicide drills.” Two detainees have taken their own lives at the facility since 2017. The day before the men raised their protest signs on the yard, the officer said, some had been barred from talking with members of a visiting congressional delegation.

“They wanted us to pick the people who would talk good about the place,” the officer said, noting that staff were also not permitted to speak to the congressional visitors.

The officer claimed that African-American staff are subject to racist jokes and mocking of their accents by supervisors.

ICE spokesman Lindsay Williams said he had accompanied the congressional delegation and that no one was purposefully kept from speaking with them. He wrote in an email that a sign-up sheet had simply filled up, and there was not enough time for everyone to meet with the congressional representatives. Williams didn’t respond to queries about the alleged racial slurs in time for publication. A CoreCivic spokeswoman said she couldn’t respond to the allegation without specific details.

To date, the detainees have not received an answer to their complaint, although the DHS Office of Civil Rights and Civil Liberties has acknowledged receipt of it. Shahshahani reported little response from the Georgia congressional delegation: Hank Johnson (D-Decatur) is the only lawmaker so far who has had staff members discuss the letter with Project South.

SPLC attorney Argueta said her group is monitoring parole denials in Georgia to determine whether they can be challenged in court.