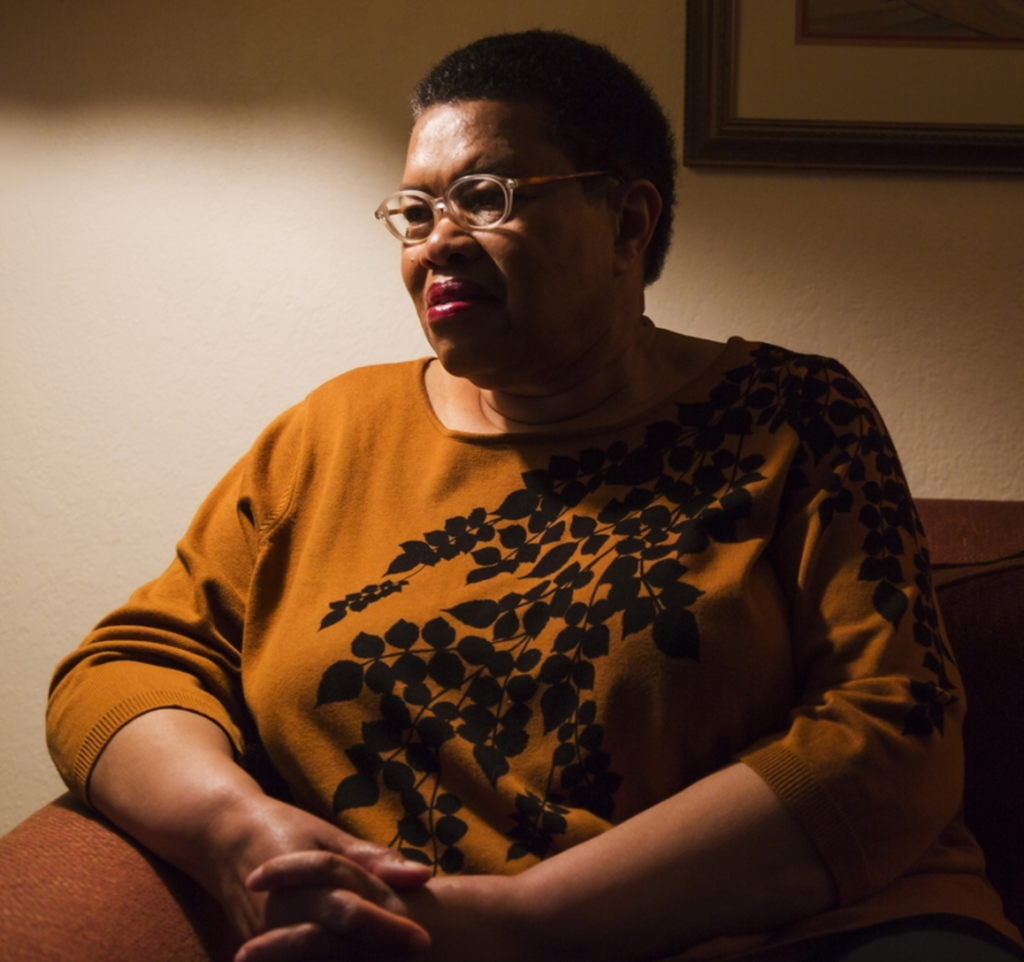 Santa Rosa: Migdalia Vasquez-Howard lives in her car with four dogs and two birds.
(All photos by Ted Soqui)

Grade-school art teacher Melissa Jones is attending the opening of an exhibit called Roofless: Art Against Displacement at the Arlene Francis Center in Santa Rosa. It is a cold, rainy night in early January. Jones is a single mother; she and her 12-year-old son live in a one-bedroom basement flat in the nearby rural community of Forestville, for which she pays $825 per month plus utilities. She is desperate to move into a bigger place, but for many the rents in Sonoma County have become unaffordable.

Among other problems, too few apartment buildings have been built in recent years. Developers say they have been hampered by huge impact fees that can run as high as $100,000 a unit, that cash-strapped localities in California, operating in a tax-raising environment straitjacketed by Proposition 13, have imposed on builders. The collapse of redevelopment funding has further reduced local governments’ ability to build enough subsidized housing. What homes do exist are, increasingly, snapped up by cash-rich real estate migrants from San Francisco looking to live on transit corridors easily linked to their work places in San Francisco or Silicon Valley. In the city of Sonoma, two bedrooms go for upwards of $1,700; in Santa Rosa for $1,800-plus.

North Bay residents have traded in short commutes to work for drives of 50 to 85 miles.

Jones has a couple of art pieces on display in the Roofless exhibit. One, titled “Urgency,” looks like a monopoly board, each square showing the cost of renting an apartment in a particular Sonoma County town. Attached to the board is a mock bomb, made of fake dynamite sticks strapped to an old alarm clock. Under the bomb is written, “Sonoma County for rents. A super-stressful game of never having enough.” 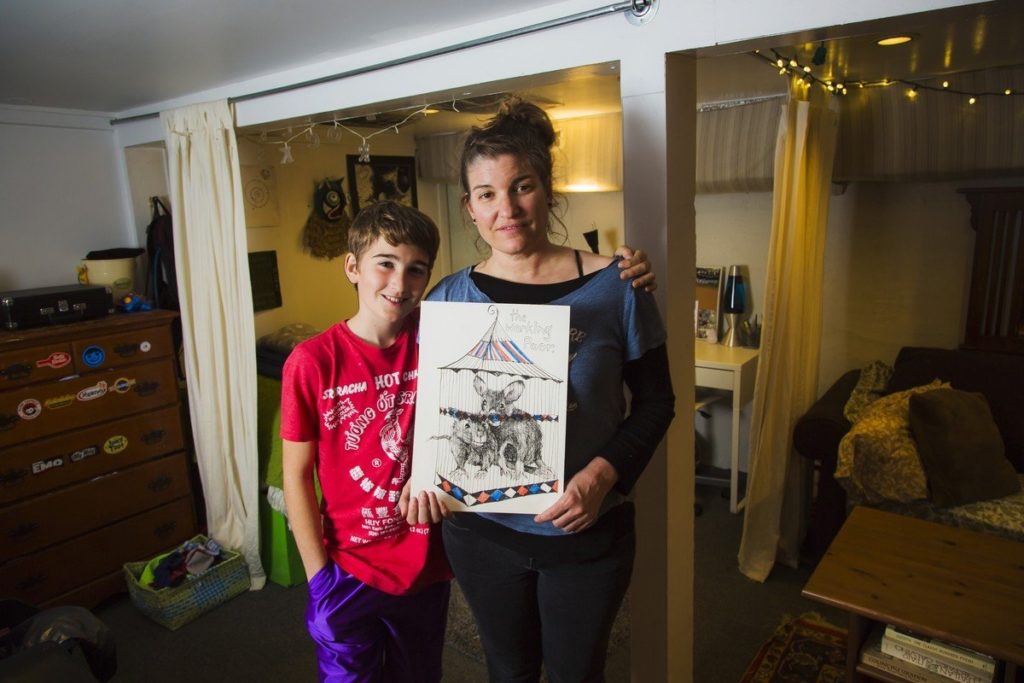 Melissa Jones and son in their basement apartment, Forestville.

“I have two degrees, [including] a master’s in education,” says the 45-year-old teacher, who grew up in Portland, Oregon and has been living in Sonoma County for the past several years, always in cramped accommodations that don’t afford her or her son much privacy. “I’m having a hard time believing I can find a second room for him. I feel like in some way I’ve failed. I’m trying really hard and it’s not enough.”

Chuck Cornell, executive director of the affordable housing development group Burbank Housing, which provides housing for Sonoma County families earning between 80 and 100 percent of the county median income, estimates that his group turns over about 400 units to renters annually; but more than 7,000 families remain on Burbank’s waiting list. Thousands more, with incomes below the 80 percent level, are caught in a poverty trap, deemed too poor to qualify for affordable housing. “They struggle along,” explains Cornell. “They double up, they work here and look for housing an hour, or an hour and a half north of us, where housing is cheaper.”

Meanwhile, the wait list for Section 8 vouchers, which remain the government’s housing subsidy of choice, is so long that people getting onto it now may not end up with apartments until well into the 2020s. Sonoma County, with a population of half a million, now has roughly 31,000 people attempting to access county Section 8 vouchers. And many cities, including the ones in the county that Jones has been looking for apartments in, do not have rent controls in place. In one community after the next, rents are now rising by upwards of 20 percent per year.

Jones is thinking of packing it in and moving back to Oregon. Many others like her have been forced eastward and southward, into towns such as Antioch, Pittsburg and Vallejo, trading in short commutes to work for drives of 50 to 85 miles. Some have even moved to the distant Central Valley.

“The housing market in the East Bay has been really impacted,” says Dan Sawislak, executive director of the Berkeley-based Resources for Community Development. “Oakland rents have skyrocketed. Working-class families have huge challenges finding a decent place they can afford.”

In December 2015, the University of California, Berkeley’s Urban Displacement Project released a report detailing the scale of displacement. Its maps show huge swaths of San Francisco now out of reach for median-income residents.

Despite significant investments in affordable housing units since 2000 in the nine-county region surrounding San Francisco, city and county governments have simply been unable to keep back the flood tides of gentrification.

Car Dweller: “People who’ve paid tax all their life should be helped, not thrown in the street.”

“Regionally, there has been a net gain in 94,408 low-income households between 2000 and 2013,” the U.C. Berkeley authors noted. “However, there has been a concurrent loss of almost 106,000 naturally-occurring affordable housing units (where low-income people pay 30 percent or less of their income on rent).” The researchers concluded that in 48 percent of neighborhoods in the nine counties they studied, significant population displacement was underway.

Tenant-advocate organizations such as Causa Justa, and affordable housing advocates such as Susan Friedland, executive director of Satellite Affordable Housing Associates, worry that the lure of a place such as Oakland – with its good public transit infrastructure, a critical mass of quality restaurants and bars, and an art scene attractive to young professionals – is, increasingly, a double-edged sword. Over the past two years, Friedland notes, a large number of developers have made Oakland “the next hot market.” The houses and apartments they are building cater not to existing working-class residents, but to people willing and able to spend on housing double or treble the amount old-time residents can afford. As a result, she says, “people are doubling up or they are moving further out or they’re homeless.”

Housing advocates who have worked in the field for decades say that they have never seen anything affect the housing market as dramatically as has this current real estate boom. “The impact is unbelievable,” says Jan Lindenthal, of the Foster City-based MidPen Housing. At city council meetings in Redwood City and other impacted locales, Lindenthal says, displaced residents now routinely attend to voice their discontent. So far, they haven’t prevented the stampede to high-end development. “There’s this speculative real estate market going on, where investors will pay anything for Bay Area real estate.”

In Santa Rosa, a 45-minute drive north of the Golden Gate Bridge, a 2013 survey of students at Santa Rosa Junior College found that “four percent of SRJC students self-reported their housing situation as ‘couch surfing,’ living on the street and/or living in a housing shelter.” 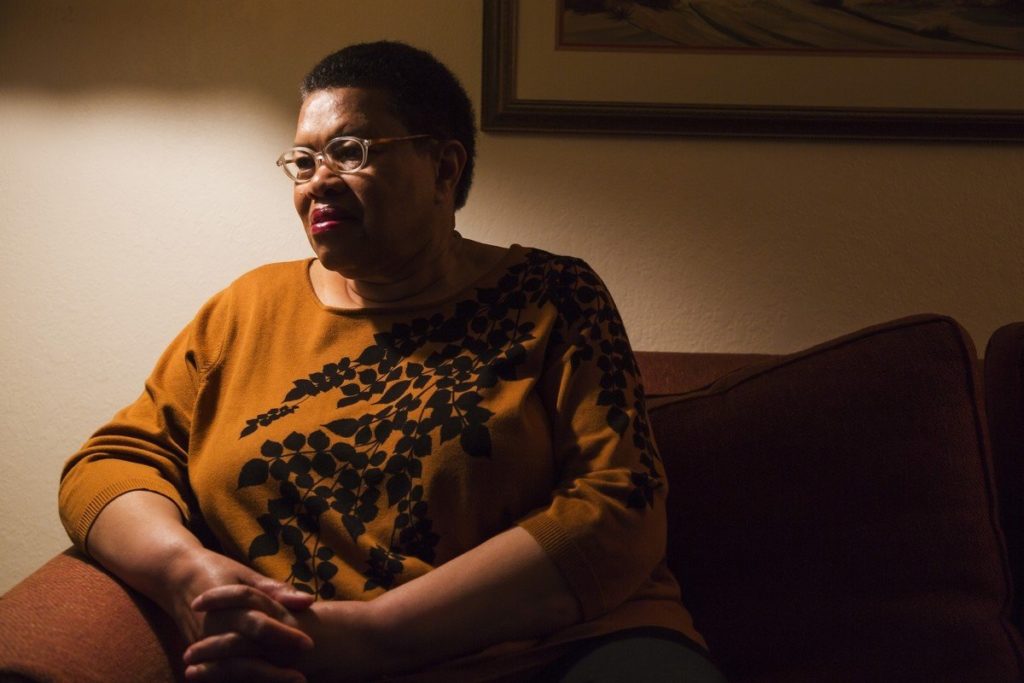 Charlene Love is living in a friend’s house in Santa Rosa.

One such student is 59-year-old Charlene Love, who arrived in Santa Rosa from Los Angeles after she had lost her home in Pasadena during the 2008 housing crisis, thinking that things would be easier in a small town environment. Instead, she found a vacancy rate of roughly one percent and, as the economy recovered, soaring rental costs. “I was homeless for a while. I stayed in two shelters,” she recalls. It was in the second of these shelters that staff encouraged her to start studying at the local college. “I’m studying horticulture,” she explains. “Eventually I want to grow my own vegetables.” In the meantime, she is house-sitting for a friend.

Many locals aren’t so lucky. In the parking lots of big-box stores in Santa Rosa, or at gas stations in Guerneville and other nearby small towns, one can see men and women living in cars. Some, like 53-year-old Migdalia Vasquez-Howard, a one-time Costco worker now surviving on disability checks, share their vehicles with pets acquired during better days.

“I raised three kids; they all went to college,” Migdalia says sadly. Nowadays she lives in a compact Kia sedan, with four dogs and two birds. Most of her belongings are kept in a tiny storage unit that she rents for $28 dollars per month. She showers every few days at a gym, the membership of which costs her another $40 monthly. “Why should I have to bother my children when I’m 53 years old? And I’ve paid taxes all these years. People who’ve paid tax all their life should be helped, not thrown in the street.”

For Chuck Cornell, these stories represent a colossal breakdown of collective responsibility. “It’s a time of extremely short resources at all levels of government,” he argues. “Until we change the distribution of wealth in this country we’re not going to make headway on this. The middle class is disappearing and it’s getting harder for the working poor to get by at all.”

Race and the Oscar Race