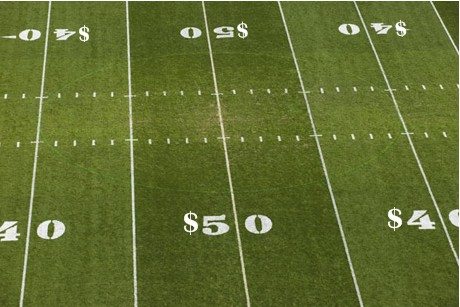 Recently the Frying Pan ran an interview with DeMaurice Smith, the executive director of the NFL players’ association, in which he responded to people who thought the 2011 players dispute with owners was a “fight between millionaires and billionaires.”

Smith pointed out that a lot of people’s livelihoods depend on professional sports, and lockouts hurt them even more than they hurt players. But there’s a bigger question raised by this issue – and one that highlights a conflict deep at the heart of American cultural beliefs. Who has a moral right (not the legal right or the logistical need, but the moral right) to the proceeds of an enterprise — the people who do the work or the people who front the money? We say we value hard work, but do we really value it more than the right of people who already have money to make even more?

Labor disputes in other industries can’t raise this question in such a basic way because the demands of workers are often couched in terms of what workers need, not what they deserve, or even their rights as workers. In professional sports that’s not as much of an issue. It’s true some players don’t make much, but in the popular imagination (and often in reality) professional athletes are making a bundle.

A few years back a colleague and I did a small qualitative study of people’s attitudes towards players and owners after another strike in professional sports (this time in baseball). What emerged was interesting. People would comment negatively on the vast salaries of players, but when it came to owners few disputed their right to make money – lots of it.

Why? Players are the ones people want to watch, who possess the amazing, jaw-dropping skills and play the heart-stopping baseball and football and basketball that fans love so much. Given how much people love their teams, it seems clear that someone is going to be getting money — shouldn’t it be the players?

Looking at the dispute this way it seems that owners have definitely — as with other extremely rich people who make their money from investments, not wages — won the cultural battle. The answer to the question, “Who should get the money?” is not “people who work,” it’s “people who invest.”

My colleague and I did our survey during Los Angeles’ boom times. Now, having been hammered by plummeting housing prices, unemployment, a credit squeeze and with Occupy movements all over the country, have our attitudes changed?

I hope the answer is “Yes!”  I’d like to live in a society where we really do value hard work, where having money to start with isn’t an automatic justification for getting more, and where the first question that’s asked about a labor dispute is why someone who isn’t doing the work is getting any money at all.

Why I'm Dancing for a Contract

Reasons for the Winter Seasons