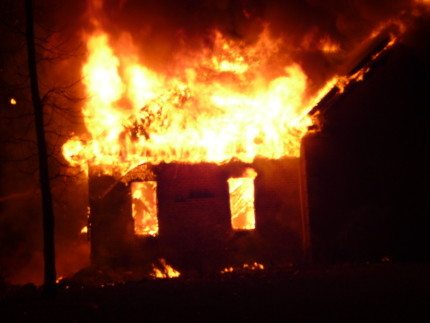 I pointed the hose at the neighbor’s smoking garage

Its walls emitted white light and exploded into sheets of flame

Marina did as I said and pounded on the window of the house, but
no one seemed to be home; those neighbors never said hello

I put water on their roof, which was starting to smoke as the garage
was wholly consumed, flames thirty feet in the air and even across
thirty or forty feet of concrete the roof of the house was catching fire

I yelled at Marina to tell someone to call the fire department, which
arrived and the house was saved

Marina only six or seven, leaning over the couch to shake me awake,
running across the lawn to bang on the window, yelling there’s a fire

Sesshu Foster has taught composition and literature in East L.A. for 25 years. He’s also taught writing at the University of Iowa, Naropa’s Jack Kerouac School of Disembodied Poetics, the California Institute for the Arts and the University of California, Santa Cruz. His work has been published in The Oxford Anthology of Modern American Poetry, Language for a New Century: Poetry from the Middle East, Asia and Beyond, and State of the Union: 50 Political Poems. He is currently collaborating with artist Arturo Romo and other writers on the website, www.ELAguide.org. His most recent books are the novel Atomik Aztex and World Ball Notebook.