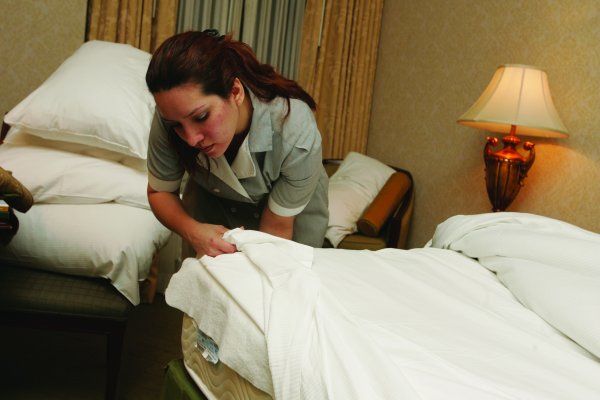 For years, women who clean rooms at Hyatt hotels have been speaking out against the injuries and hazards they face at work. In a recent press statement, Hyatt denied there is a problem, reducing citations and settlements to mere technicalities. Despite their protests, California state regulators disagree.

In a bold move last week, state regulators fired back at statements made by a Hyatt spokesperson that problems housekeepers face at the Hyatt Fisherman’s Wharf Hotel were “the equivalent of lagging paperwork.”

According to Amy Martin, the chief counsel of Cal/OSHA who called the San Francisco Bay Guardian disputing claims made by a Hyatt spokesperson:

“Cal/OSHA believes it found plenty of evidence both of injuries sustained by housekeepers, as well as violations of Cal/OSHA regulations.”

Comments traded by Hyatt and government officials last week came after a major settlement in a longstanding case [revolving] around housekeeper injuries at the Hyatt Fisherman’s Wharf Hotel. The settlement commits Hyatt to take specific steps, including conducting a job hazard analysis and establishing a Housekeeping Committee, to prevent exposure to unsafe conditions that cause housekeeper injuries.

Nenita Ibe, who has worked at Hyatt Regency Santa Clara for 10 years:

“This settlement is a big victory for Hyatt housekeepers. Hyatt is being forced to pay attention to the injuries housekeepers get at work. I’ve seen so many of my co-workers in pain. Now, Hyatt will have to listen to what housekeepers have to say. Hopefully, Hyatt will make the required changes so housekeepers won’t get hurt on the job.”

Housekeepers are experiencing pain and injuries at work that could be avoided if Hyatt made simple changes that could reduce the physical toll of housekeeping work. Hyatt has singled itself out as the worst employer in the hotel industry by abusing its housekeepers, replacing longtime employees with minimum wage temporary workers, and imposing health-threatening workloads on those who remain.

This case points to problems that have been seen in Hyatt hotels nationwide. The solutions that came from the Hyatt Fisherman’s Wharf settlement are exciting innovations, such as establishing a Housekeeping Committee, and an opportunity for a new partnership between Hyatt and its workers to address the debilitating injuries its workers face.

(Annemarie Strassel is Communications Coordinator at UNITE HERE. Her post first appeared on Labor’s Edge and is republished with permission.)

The Family and Medical Leave Act and Its Enemies

Workplace Rule: Smile or Else