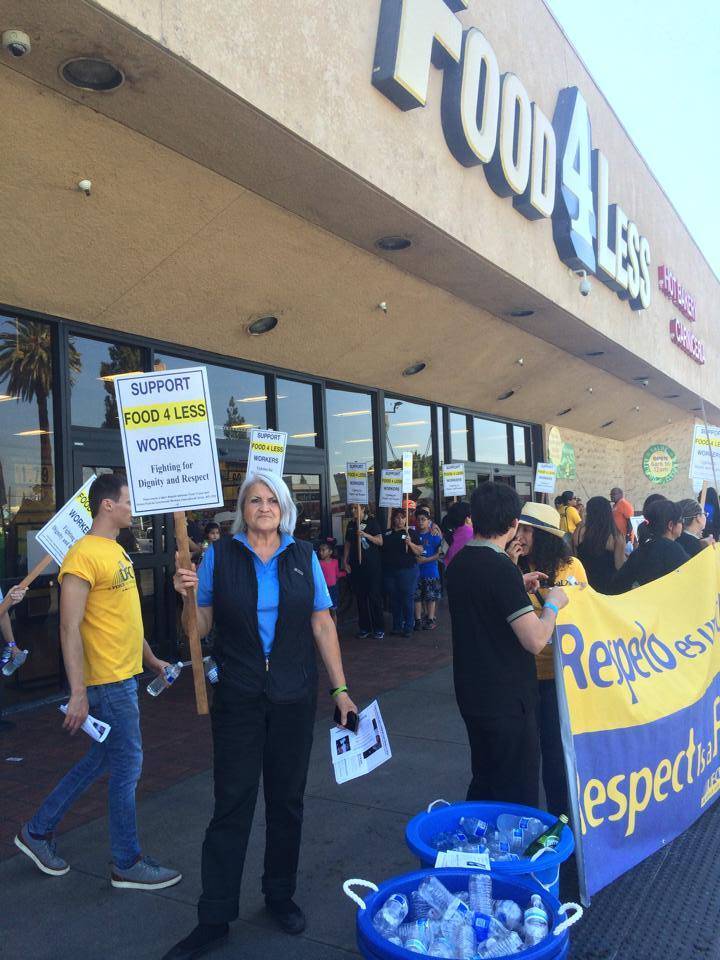 Food for Less grocery workers and the Kroger Corporation backed away from the edge of a cliff Tuesday, following weeks of a labor standoff. Both sides averted a potentially devastating strike with a tentative labor agreement whose proposed contract covers some 6,500 workers at 90 stores throughout Southern California.

Employees authorized a strike in July and then launched a consumer boycott in the face of Kroger’s threat to slash contributions to medical plans, reduce hours and transfer the work of higher-paid employees to those lower on the wage scale.

In mid-August hundreds of workers turned out on informational picket lines and urged consumers to shop elsewhere. During this time, Kroger recruited strike-busters from Ralphs, another grocery chain it owns.

Why did Kroger refuse to budge? The Cincinnati-based Fortune 500 Company that owns Food 4 Less, Ralphs and Frys recorded a half-billion-dollar profit for the first quarter of 2014, so it wasn’t as though the company had to shave costs to yield profits. Analysts say the Food 4 Less negotiations were the last before Kroger negotiates a new contract with Ralphs employees—hence a show of muscle. Ralphs workers’ most recent two-year contract talks were concluded this past May.

Union officials say workers saw no option other than to push back against Kroger demands. The downward spiral of wage and work standards affects the daily lives of employees in the most essential ways.

Kroger was pushing to guarantee monthly hours rather than weekly—that means that an employee might work 20 hours one week and eight another.

“You can’t count on a paycheck that way. You think you can pay down a credit card–then you don’t get the hours the following week and find you can’t buy food. It undermines the whole concept of a good job—you’re chasing work and that is not our idea of what a good job means,” said Rick Icaza, President of United Food and Commercial Workers (UFCW) Local 770.

The new agreement is anticipated to eliminate that uncertainty for now.

The UFCW can’t  disclose details  before employees ratify the agreement  after Labor Day, but says the proposed contract is consistent with the terms of employment at all the major chains.

Ken Jacobs, Chair of the University of California, Berkeley’s Center for Labor Research and Education, notes that it’s common for grocery industry negotiations to go to the brink—but that a persistently weak labor market emboldens employers to push for concessions from labor in order to set precedent—one of lower work and wage standards.

“They do what they think they can get away with, which is why we need unions,” says Jacobs.

The dispute is settled for the short term, but the stakes remain high as supermarket corporations and the unions that represent company employees try to find their footing in a rapidly shifting grocery retail landscape.

Consumers used to hit the local grocery store to pick up food essentials. But now we can acquire food items along with clothing, shoes, sportswear and cosmetics  at general merchandise retailers such as Target and Walmart. These chains with low-wage, nonunion business models have grabbed a significant share of the food market, upping the profit pressure on traditional grocery chains.

The effect has been a push on the part of employers to reduce work standards and wages.

“Shelved,” a 2014 report prepared by the Food and Research Center at U.C. Berkeley (and commissioned by the UFCW), analyzes trends in the grocery industry. “Shelved” reports that the “low-cost model has impacted the behavior of many of California’s long-standing unionized grocery chains, which have cited Walmart’s expansion as a competitive pressure that has forced them to pursue similarly low labor costs.”

Nonunion gourmet and organic food stores have also entered the picture, according to the report, as well as so-called ethnic markets in the inner city, from where large grocery chains have largely decamped.

“Numerous studies indicate that the growth of this low-cost model has created serious downward pressure on wages and working conditions industry-wide,” the report says, “and has shifted substantial costs onto taxpayers: Thirty-six percent of California food retail workers use some form of public assistance according to government data, for a total annual cost to the state of $662 million.”

Both sides in the Food 4 Less standoff negotiated in the shadow of the painful 2003-2004 strike and lockout, when 70,000 Southern California grocery employees walked off the job at Vons (owned by Safeway), Ralphs (a Kroger chain) and Albertsons. The four-month strike cost the three companies an estimated $2 billion.

Ralphs—but not its parent company Kroger—was charged with illegally rehiring locked-out workers under false names and Social Security numbers, and eventually settled with a guilty plea and $20 million in fines, along with a $50 million penalty with which to reimburse workers.

The illegal tactic prolonged the grocery companies’ ability to withstand the strike. It was hugely damaging to employees who lost homes and savings as they struggled to wait out four months of no work.

But it cost the companies as well– many consumers unwilling to cross the picket line permanently changed their shopping habits, while the customers that went to Trader Joe’s kept going to Trader Joe’s.

Kroger may have taken that into account as the negotiations with Food 4 Less employees continued.

Also in the mix—competitive pressure from a pending merger between the Albertsons and Safeway chains. Private equity firm Cerberus owns Albertsons and has borrowed $7.6 billion to acquire Safeway.

Someone has to pay that debt. Worker advocates fear the large-scale borrowing will exert further downward pressure on work standards as flagship grocery chains look to cut corners.