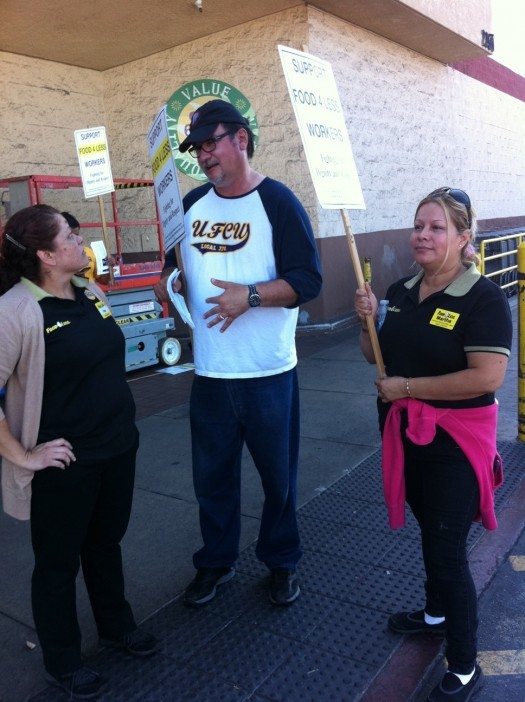 On Wednesday grocery shoppers at Food 4 Less stores throughout the Southland were met with smiles, picket signs and a message from the supermarket chain’s employees and supporters: Please don’t shop at Food 4 Less until its parent company, Kroger Company, signs a new union contract.

The most recent collective bargaining agreement between Food 4 Less and its workers expired June 8 and employees are concerned about work-standards reductions and a potential undercutting of medical benefits for 6,500 workers at 90 Southern California stores.

Kroger’s proposals include axing hours across the board and reducing company payments into employee health and welfare funds. The Cincinnati-based company recorded a half-billion-dollar profit for the first quarter of 2014.

At the Highland Park store on Figueroa near Avenue 52, Maribel Garcia, a United Food and Commercial Workers organizer, was unfazed by the August heat. She was still energetic after eight hours in the parking lot asking shoppers to support the boycott by seeking their groceries elsewhere.

“Nice! We just had another person turn around!” she exclaimed as she watched a customer get into a car and drive off after a conversation with a picketer.

At the Food 4 Less in nearby Boyle Heights, store employee Martha Medina wore her work uniform and name tag as she and seven other picketers reached out to shoppers. The Boyle Heights Food 4 Less on East First Street anchors a small shopping center that includes, among its storefronts, a Nix check cashing/loan-advance office and a WIC nutritional center.

The parking lot was crowded with cars, many driven by mothers who had just picked up their kids after school.

Medina knows the stakes of working out a successful contract—she works a 40-hour week at the store. Her four children—19, 14, 12 and 10 years old—depend on the paycheck she earns as a cashier and general merchandise stocker. Medina hopes a resolution of the contract dispute will come soon.

“I just need better benefits for medical,” she told Capital & Main. “I have a son who has seizures. If I go to the doctor, it’s $30, but if I go to the emergency room, it’s $100.” That doesn’t include the medicine, Medina said. Sometimes her son’s seizures occur a few times a month. It gets expensive—so she can’t afford the insurance cutbacks Kroger Co. proposes.

Cashier Elsa Palomares had just finished her shift at the Boyle Heights Food 4 Less, then stepped outside to take up a picket sign and a handful of fliers to engage shoppers—her regular customers. She has worked for Food 4 Less for 11 years and is concerned about a reduction in hours and benefits. “We just want a fair contract,” she said.

Organizer Eric Ramos said he stopped counting when the number of customers who refused to cross the informational picket line reached 20, including a crew of firefighters who had come to shop but turned away in support of the boycott.

“People live and shop in this community,” Ramos said. “These workers are their neighbors.” When Food 4 Less employees stand outside on a picket line, Ramos said, shoppers “understand. And they leave.”

Bill Arth, a forklift operator at Los Angeles International Airport, lives in Boyle Heights and came down to talk to customers and hold a picket sign outside the Food 4 Less.

“People have turned away out of solidarity,” he said. “One guy who turned away brought us a couple of boxes of pizza.”

The one-day August 13 picket lines were part of an ongoing series of actions to bring attention to the dispute and build support for a fair contract.

The boycott, launched August 6, will continue until contract issues are resolved, said Mike Shimpock, a spokesperson for the union. He said Kroger “is trying to nickel and dime the Food 4 Less workers, trying to take away full-time jobs and benefits.”

He has a hard time believing Kroger needs to cut worker hours and benefits to protect its financial well-being.