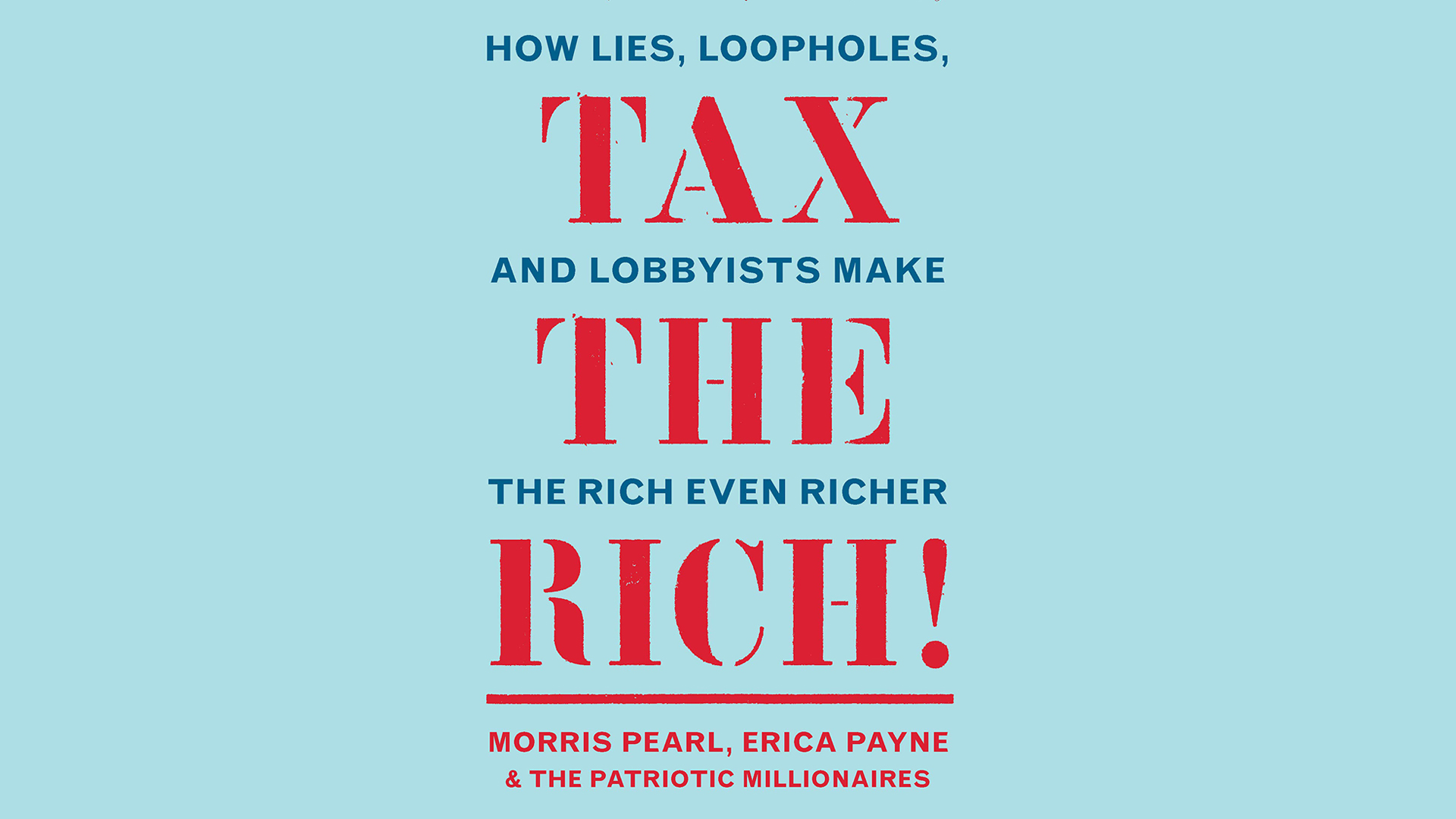 Benjamin Franklin quipped that the only things we can be certain about in life are death and taxes. Being an American, Franklin should have added that we can also be certain that the wealthy will pay a smaller percentage of their income in taxes than regular working people.

In Tax the Rich! How Lies, Loopholes, and Lobbyists Make the Rich Even Richer — Morris Pearl and Erica Payne have written a guidebook on how corporations and the mega-rich protect and expand their wealth with the help of their political enablers. It’s  essential to understanding how complex tax laws – especially the Trump tax “reform” of 2017 – perpetuate the obscene wealth gap in the United States.

If you want to know how Facebook avoided paying taxes on $1.1 billion of profits in 2012 and actually qualified for a $429 refund from the federal government, this is the book for you. Morris Pearl, a former managing director of the investment firm BlackRock, is the chair of Patriotic Millionaires, an organization dedicated to raising taxes on the wealthy.  Erica Payne is the organization’s founder and president. (Disclosure: Pearl is a member of Capital & Main’s Board of Directors.)

Capital & Main: Rightward leaning think tanks and pundits constantly point to the fact that high income earners – those making over $800,000 a year – account for a quarter of federal tax revenues as a rationale for not increasing taxes on the wealthy. What’s wrong with this approach?

You write in the book that the top 1% own over 40% of the wealth. What is wealth as opposed to income?

Pearl: Wealth is all the portfolios, stock brokerage accounts, the balance in people’s bank accounts, the value of their homes. The top few million people in the country – 1% of the people – own 40% of everything.

Republicans are now running for midterm elections in 2022 on how the Trump tax cut in 2017 was a great success. They claim wages went up and unemployment went down because the corporate tax cut created a demand for labor that helped disadvantaged groups.  Are they right?

Erica Payne: We wrote the book because of that tax bill. They took a dynamic  that had been going on for 70 years, where the wealthy were making  less of a tax obligation to the country, and they used all of their political power to accelerate that trajectory. The net result is that the wealthiest people in the country pay even less than they have for 70 years as a percentage of their income.

Pearl: The unemployment rate has been going down from 2010 to the beginning of the pandemic 10 years later. Nothing remarkable happened in 2017 other than continuing the trend that had been going on for years.

In the book you outline the methods by which the wealthy and corporations avoid paying taxes. How did companies including Starbucks, Amazon and Chevron  avoid paying any federal income tax in 2018?

Pearl: A lot of these large companies have intellectual property they put in their overseas affiliates so they can transfer a lot of their income to these overseas affiliates – patents, trademarks and so on. These affiliates are located in countries that have lower corporate tax rates than the United States. Starbucks was selling lots of coffee in Great Britain but booking all the profits in the Republic of Ireland, where the tax rates were lower. All the mom-and-pop businesses in the United States don’t have the wherewithal to create foreign affiliates to move their money around.

Payne: The biggest way the rich avoid paying taxes is they get taxed on their capital gains as opposed to their labor. If Morris and I make $100,000 but I make it from working and Morris makes it from investing, I end the year eight or nine thousand dollars poorer than Morris, even though I worked all year long and Morris just pushed a button on his E-Trade account. It’s much more advantageous to make money off of your capital gains than to make money off your labor. So [the U.S.] pretends to embrace the American work ethic but we don’t actually value work.

You point out that your organization supported a bill in the California Legislature to tax profits generated by private equity fund managers an additional 17% — the so-called carried interest – to make up for the tax break that fund managers receive on their federal income taxes. This failed in supposedly liberal California. Why?

Payne: California is typically liberal on social issues. [It is] not particularly progressive on fiscal and tax issues. We got a sponsor for the bill to close the carried interest loophole. Every venture capital fund in California signed a letter to the legislature saying that the sky would fall if they closed this loophole. Lawmakers caved.

The private equity funds claimed they would leave the state if this law passed?

Payne: We started calling individuals in those private equity funds to challenge them on their letter and got no responses. This particular loophole is one of the dumbest loopholes in the tax code but it has some of the most ardent supporters because it secures an enormous amount of money that gets divided between a small group of [about 5,000] people.

You also point out that in the 2017 tax law there are incentives for investing in plants and facilities outside of the United States. Where are the “America First” Republicans on this issue? It seems like people should be outraged about this.

Payne: It’s in the tax code because Republican donors told them to include it. They are not “America First” Republicans, they are campaign donor first Republicans. The only people the Trump tax plan was positive for were the small number who fund the political campaigns of the people who voted for it.

Pearl: The Republican logic was basically, we have to appease rich people or else they will be mean to us. The intention was to say that companies that are actually overseas and happen to do incidental business in the United States won’t have to pay taxes. So, you put in a definition where you say based on how much physical stuff you have outside of the United States the lower taxes you have to pay. That gave every company an incentive to move as much physical plant and equipment overseas as possible.

The historian Tony Judt wrote some years ago about how political support for Social-Democratic parties in Europe declined as changing demographics and immigration undermined support for the welfare state. Right wing parties campaigned on the idea that benefits were going to the “undeserving” or noncitizens. How do these kinds of issues play out here with respect to support for taxes on the wealthy?

Payne: Here the problem is not public will. Public sentiment has always been pretty consistent about the need for millionaires and corporations to pay higher taxes. In fact, the support for the Biden infrastructure plan goes up 10 points when you explain to people that corporations were going to pay for it. The problem is the political system. The vast bipartisan majority of Americans believe multimillionaires and corporations should pay higher taxes. Here you have the dividing line between what the public wants and what the people in charge will do.

In the Wall Street Journal last week  Ned Lamont, the Democratic governor of Connecticut, was quoted saying he doesn’t want any more taxes.  He said “jobs are being created and I don’t want to do anything to stop that momentum.” Is this a typical sentiment even among leading Democrats?

Payne: Ned Lamont is not exactly a progressive Democrat. Some of the biggest problems we have with state-based tax codes are in states that are run by Democratic governors. In Colorado, Gov. Jared Polis supports lower taxes on rich people. Andrew Cuomo fell over himself to try to prevent progressive taxation from taking hold in New York. Gavin Newsom is not exactly beating the drums for a progressive tax system.

So, you are saying we have two parties that are – I’ll use a crude term – bought off by these same rich donors?

Payne: The donors are strategic. They have a thing they want done, and they know political control moves back and forth, so they run a very well-funded public education [campaign] about why higher taxes on the wealthy are bad for everybody else. They buy their direct influence across party lines. We have to get 51 votes in the Senate to get Biden’s Build Back Better plans across the finish line. Biden doesn’t need Republicans to reform the tax code. However, there are 12 to 14 Democrats in the Senate and probably 40 Democrats in the House with ties to Wall Street and corporate America who may not be committed to the critical reforms we need.  The Republican Party is a wholly owned subsidiary of some of the wealthiest people in the country whose sole purpose is to lower their own tax bill.

Are there countries that do a better job in terms of fairness in their tax system?

Pearl: A lot of Western democracies do a better job than we do. France has a more progressive tax system. If you are a French businessman, you are less likely to earn your third or fourth billion dollars but everyone is more likely to have day care for their children. On average, most people are happier with that kind of tradeoff. In Europe I think it was mostly xenophobes talking about fearing immigrants that changed most of their politics.

What would be the four or five things you would do if you had the ability to change the tax system?

Payne: First I would equalize ordinary income and capital gains tax rates and inheritance tax income over a million dollars. I would reform the corporate tax code so that companies could not pretend that they do business somewhere other than where they do business. I would implement a minimum global tax like [Secretary of the Treasury] Janet Yellen has been suggesting. I would put in a substantial wealth tax.

Where is Biden on tax reform and the possibilities for substantial change?

Payne: President Biden has put a very strong corporate tax reform proposal on the table. He has called for the equalization of ordinary income and capital gains over a million dollars. The fact that we have a Democratic president saying these things and now his administration is working hard to make that happen and get that through the Democratic Senate is a moment when we could have some fantastic reform to our tax system which could bring in a level of fairness that we haven’t seen in decades.

If it fails it’s on those “Wall Street” Democrats?

Payne: If it fails it’s on the Democrats but also on the dark forces of influence that could not be overcome.

The History Los Angeles Has Lost to the Pandemic