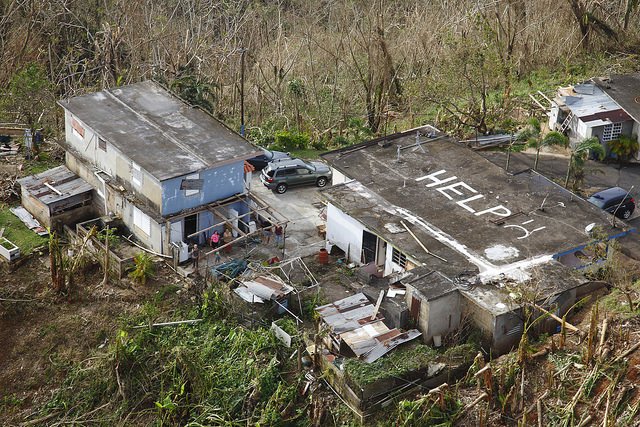 “I think I was in total disaster fatigue last week,” my wife Susan said to me as we began a little down time over the weekend.

And no wonder. Hurricane Harvey had no sooner finished devastating Houston and surrounding areas, than three more storms lined up facing Florida and islands in the Caribbean and the Atlantic. People fled several small outer islands, like Barbuda, only to find themselves stranded in a Puerto Rico shattered by record rains and winds.

Then came the news of vast wildfires throughout the American and Canadian West. From the Columbia River Gorge to the worst ever inside the Los Angeles city limits, these fires consume almost two million acres, a territory nearly the combined size of Rhode Island and Delaware. This was not supposed to happen in the wake of last winter’s drenching rains. The land and the vegetation were expected to be wet enough to forestall such horrors.

The storms and the fires come with warnings that this is what human-caused climate change looks like. The increasing incidences of catastrophic storms and fires come from a common source. According to the National Centers for Environmental Information, which is part of NOAA (National Oceanic and Atmospheric Administration), sea levels, temperatures of sea water and its surface, the air above the oceans, and over the land have all gone up. Meanwhile, sea ice, glaciers, ice sheets and snow cover have decreased. These phenomena all result from the amount of carbon dioxide humans put into the atmosphere.

With information that clear, no wonder climate change deniers don’t want the American people to know. So President Trump has salted his cabinet with deniers and wants climate change information scoured from the government’s web sites, just like the governor of Florida has forbidden his Environmental Protection Agency’s employees from using the words like “climate change” or “global warming.” But there is a reason why NOAA is in the Commerce Department and not, say, at Interior, where you might expect it: Business relies on forecasting calamity. Stability matters. Predictability makes a difference in the profit/loss column.

Knowing what’s coming matters to people in the pathway of destruction, too. Newspapers and television cover the threat of approaching catastrophic fires and storms because they provide warnings and generate suspense for the rest of us. The press also tends to cover the immediate aftermath because people want to know what happened. Readers get heroic stories, viewers see great visuals, and if they are lucky, the victims get help while people are paying attention. Then comes the difficult stuff and the long road to recovery. Network television turns away, and newspapers and broadcast outlets—except those based in the disaster area–may only continue a storyline for a brief time, unless they return years later for a historic look back.

But for the people on the ground, the horror of tragedy continues. Following Katrina in 2005, my wife joined a team of church people who volunteered in New Orleans. She came back shell-shocked by the devastation. Six months after the hurricane, the streets were still filled with piles of debris, fallen trees, uprooted shrubbery. Houses just being opened still held dead refrigerators filled with toxic mold.

Construction workers in hazmat suits gutted a home, down to the studs, so it could be rebuilt. A year later when we went back together, homes still stood empty, uninhabitable, some with FEMA (Federal Emergency Management Agency) trailers in the front yard. Trees, stripped bare by the winds, were just beginning to leaf again. Remnants of the wreckage sat everywhere. Street car lines weren’t operating in some locations. That was still true a year later. Vast areas like the Lower Ninth Ward, remain mostly vacant even now. It takes a long time to recover from disaster.

In these situations local resilience and national response make a difference. People sharing food, cooking together, sorting through the rubble, building temporary shelters – all these efforts matter. In the immediate wake of Harvey, the volunteer “Cajun Navy” showed up with their small boats and skiffs. They rescued everyone they could without regard to race or religion or wealth because “Floodwaters don’t discriminate,” as they say. FEMA-sponsored teams soon began arriving from across the country, including California.

Donation centers popped up, of course. Some are worthy, others not. Before contributing to the rebuilding anywhere, make sure you find an organization that’s trustworthy. And sometimes the best known – like the Red Cross – are not the most locally effective or transparent.

These devastated places will take a long time to be habitable again. Lives will be upside down for a very long time. We Americans have a short attention span. As these catastrophes pile up, my fear is that we will get worn out before we work it out. A significant part of that work will be reducing our impact as human beings on this planet.

Related Topics:Climate ChangeOp-Edopinion editorial
Up Next