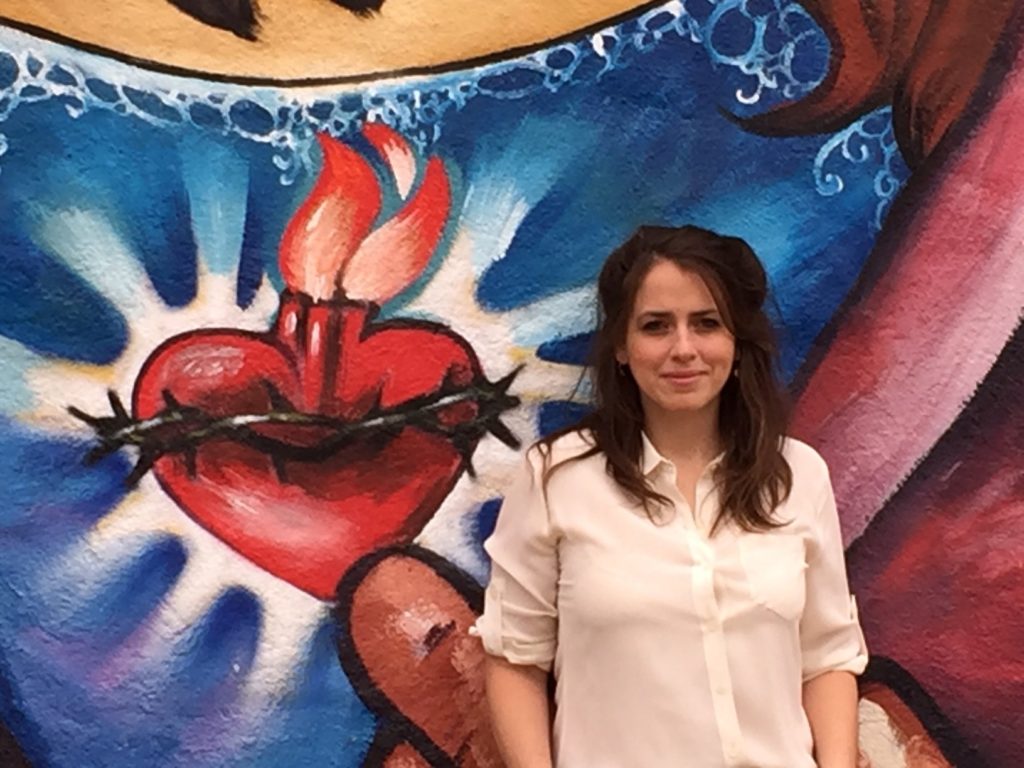 The short-subject film Hotel Arizona debuted in Los Angeles October 13 at the Highland Theater in Highland Park. Filmmaker Devin Browne is a Southern California native who moved to Arizona in 2010 and began covering immigration issues at a public radio station in Phoenix. Right around this time last year she launched the Kickstarter campaign that produced the $21,000 it took to create the 22-minute story about a young woman, Flor (Marcela H. Macias), who with her mother runs a hotel where migrants stay, and who devises a way to “Yelp” the smugglers who bring people across the border and rip them off—or worse. The smugglers are called “polleros” and the smuggled, “pollitos”—little chickens.

Devin Browne: I’ve been going to the Mexican town of Altar since 2011—along with Nogales and various shelters and places in Tucson and Phoenix. Migrants [told me] what their experiences were like with their guides in the desert —they were robbed, they were extorted, they were raped—someone died along the way and a relative was still charged all the money.

In most other informal economies there’s some system of accountability. If I thought I was buying drugs on the corner and it turned out to be baby powder, I would never buy from that guy again and I would tell all my friends –don’t go to him—he’s not really selling cocaine.

The migration economy is unique in that way—it does not have that self-correcting loop of accountability and, because it doesn’t, there are some really big consequences — some horrific things happen in the desert.

You talk about an invisible informal economy—what is the place of the hotel boarding house in your film?

Altar is not a border town, but is 40 miles south of the border—it’s the primary [migrant] staging town in Sonora. So if you are going to walk into the United States through the desert you are probably going to come through Altar first.

The whole economy is based on migration. The women and men who sell carpet-soled slippers [that don’t leave tracks in the desert], salespeople with mini-deodorants, caffeine pills; the pharmacist who is well-stocked with birth control because she knows it’s almost entirely likely that a woman walking into the desert will be raped.

So Flor kind of Yelps the polleros by writing “reviews,” on the bottom of a bunk, of the coyotes who traffic in humans?

Yelp is very unpopular in Sonora—I don’t know any of my friends that use it in Hermosillo or Coborca or any of the towns I’ve lived in. Most migrants have smart phones but probably don’t have access to an app like Yelp, even if it was popular.

But when I was staying in a guest house I was in one of these beds and I saw someone had written Pollito Bonito (pretty little chicken) and I remember looking at it and thinking that this girl has sense of humor – she’s making a little rhyme for herself—and she’s telling the world she exists, that she was here.

One of the actors, Fausto Olmos Renteria, told the Tucson Weekly, “We thought the border story was overplayed already—but this is different.” What makes it different?

It’s an immigration story in which the main characters are not immigrants. The main characters are the people that work in the immigration economy. I’ve never seen a movie or a television show about all the people who financially depend on illegal immigration exactly as it is right now—the women, mostly the women — that run the hotels and the guest houses. And the men and women that sell all of the items and gear — the black water bottles and the big backpacks that the migrants have to buy. And the coyotes —it’s big money. It’s over $3,000 just to cross from Sonora into Arizona.

The movie asks the question, What would it be like if this largely invisible phenomenon, this mass migration in the desert, was a little more visible?

The film debuts tonight – what’s the next step?

My biggest hope is that it catalyzes a conversation about how the migration world is bigger. What happens a lot of times in immigration stories I see—in news and in fiction, is that somebody is coming to a place. But how do we get along, what do we have in common, what do we not have in common?

What I hope happens is a deepened sense of what kinds of migration stories we can be telling and to understand the whole—the economics of it, the finances of it, what it looks like when someone tries to disrupt that status quo, what kinds of powerful forces are invested in keeping things exactly the way they are right now.