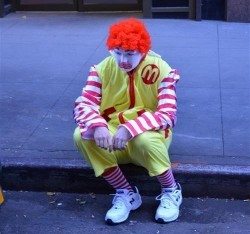 Thursday’s one-day strike by fast-food workers may have received relatively little media coverage, but  the doubling of strike sites to 100 cities over the previous nationwide actions showed the movement for higher wages and union recognition is growing.

The largest actions were held in New York City and Chicago, where, according to the Guardian UK, “hundreds of protesters gathered outside a McDonald’s at 6:15 a.m. as a large ‘Christmas Grinch’ ambled about in freezing temperatures.”

According to the Seattle Times, about 150 demonstrators rallied at City Hall following an all-day march in icy weather from neighboring SeaTac. In Los Angeles, rallies were held at dawn in South Los Angeles at a Manchester Boulevard McDonald’s, as well as a Sunset Boulevard McDonald’s in Silver Lake, at noon. The movement for fast-food employee rights has the twin goals of raising starting salaries to $15 an hour (at present they typically begin at $7.25) and to win the right to organize workers into unions.

McDonald’s didn’t bother issuing a new press release on the actions. In August the chain distributed a statement about the activists’ claims saying, in part, “the story promoted by the individuals organizing these events does not provide an accurate picture of what it means to work at McDonald’s.”

Meanwhile, today Mother Jones offered this thoughtful analysis of the history and direction of the fast-food worker movement:

Lisa Reid is a cashier at a KFC in Brooklyn. She’s 27, with three kids. She works 16 to 26 hours a week at the federal minimum wage of $7.25. That’s not enough to live on, so sometimes she takes a second or third gig at McDonald’s or Burger King. But right now, she just has the one job. She lives with her mom to make ends meet.

Last year, Reid was approached by an organizer with the community group New York Communities for Change (NYCC) who asked her if she thought she was paid enough, and whether she wanted to fight for better working conditions. “We do a lot of work for the pay we get,” Reid says. And that’s why she decided to join very first fast-food strike in November 2012, and why she has participated in every one since.

On Thursday, Reid—holding a protest sign and a four-year-old—was among the thousands of workers in 100 American cities taking part in the largest such strike to date. Workers are demanding a $15 minimum wage and the right to form a union without retaliation. The movement has grown faster than many of its organizers had expected, stirring up debate in media and policy circles over the federal minimum wage.

The movement was initiated by the NYCC—which has run campaigns in poor communities to prevent foreclosures, protect rent-stabilized housing, and stop school closures—with the help of Service International Employees Union (SEIU). Executive Director Jonathan Westin says that working with low-income people over the past few years has opened organizers’ eyes to the number of people whose fast-food jobs left them impoverished. (Read more.)

Working for Walmart: A Manager’s Story