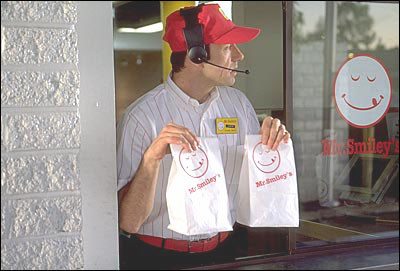 As classical music piped through the audio system at the McDonald’s in downtown Seattle on a recent day, customers devoured hamburgers while sitting in maroon-colored seats and at tables bathed in warm colors.

Customers lined up at registers, exchanging cash and credit cards for an assortment of hamburgers, fries and drinks.

These days, many fast-food employees at large restaurants are hoping that more than just hamburgers, tacos, fried chicken and sandwiches will be exchanged across restaurant counters.

They are hoping that higher hourly wages will come their way so they won’t have to apply for nearly $7 billion in U.S. taxpayer assistance each year to offset what they say are wages too low to support themselves and their families.

See infographic, below right, in Just the Facts.

Researchers at the University of California at Berkeley announced last week that the median national wage for front-line fast-food workers is $8.69 per hour and that the $7 billion in taxpayer support amounts to a subsidy for a $200 billion industry.

“This is the public cost of low-wage jobs in America,” Sylvia Allegretto, an economist at U.C. Berkeley and co-chair of the Center for Wage and Employment Dynamics, said in a statement. “The cost is public because taxpayers bear it. Yet it remains hidden in national policy debates about poverty, employment and public spending.”

The safety net assistance comes in the form of Medicaid, Earned Income Tax Credit payments, the Children’s Health Insurance Program and the Supplemental Nutrition Assistance Program, according to the October 15 report.

That annual dollar amount covers 52 percent of front-line fast-food workers in the country who enroll themselves or their families in the programs. Researchers said the enrollment rate for this assistance for fast-food workers is more than twice that of the general workforce.

In a statement, McDonald’s USA did not specifically address the issue of the nearly $7 billion in annual subsidies for the industry. But the company pointed to the fact that hundreds of thousands of people are employed at their restaurants and independent franchises.

“Those jobs range from entry-level part-time to full-time, and we offer everyone the same opportunity for advancement. Our history is full of examples of individuals who worked their first job with McDonald’s and went on to successful careers both within and outside of McDonald’s,” the statement said.

“As with most small businesses, wages are based on local wage laws and are competitive to similar jobs in that market. We also provide training and professional development opportunities to anyone that works in one of our restaurants.”

Jason Harvey, a Burger King employee in Seattle, believes part of the solution is in raising the minimum wage to $15 per hour. He earns $9.19 per hour.

A sign at Dick’s Drive-In in Seattle outlines the hourly wage of at least $10 and medical and dental benefits offered to its employees. Photo by Equal Voice News

To survive these days, the 42-year-old U.S. Navy veteran is living in public housing in Seattle and receiving food stamps. He also visits food banks. “I’m getting food stamps but that doesn’t cover my total food bill,” he said.

For solutions, he also pointed to the business model used by Dick’s Drive-In, a family-owned, Seattle business known for hamburgers. It has competitive prices for its food and offers its employees at least $10 per hour and medical and dental benefits for people working at least 24 hours per week.

“If they can do that at a local company, then why can’t they do that in big corporations?” Harvey said.

As people streamed in and out of the McDonald’s in downtown Seattle, customer Barry Mamadu stood on a nearby corner. He had just finished his meal of a cheeseburger and fries.

Upon hearing about the debate over fast-food worker wages and their need for $7 billion in taxpayer subsidies to survive, the 53-year-old Seattle resident thought about who should pay to help out.

“More money would be good. It should come from the customers. If the company has money, they should pay, too,” he said.