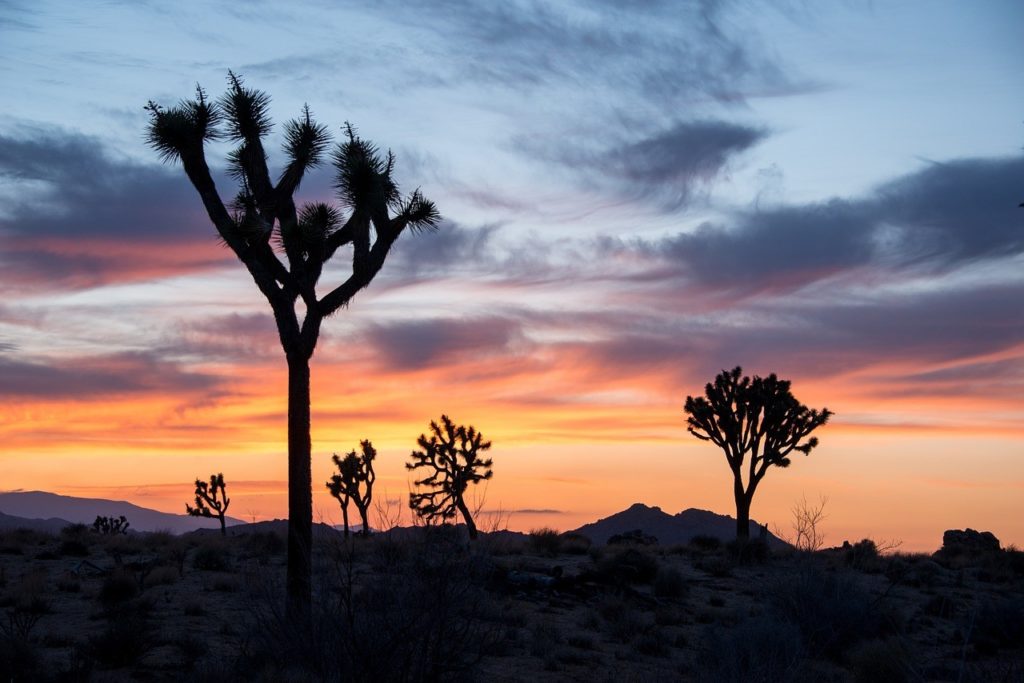 We have a favorite place to camp at Joshua Tree when it’s available. Across the road from this spot there’s a large space, and frequently someone in a very big vehicle takes it. This time, the guy drove a spiffy pickup truck pulling a tiny trailer in matching black that sleeps two. As often happens in such places, we got to talking, and in a short time he revealed that both he and his wife attend an evangelical mega-church near their Inland Empire home, and that while he believed in human-caused climate change, she did not.

I believed the universe had a purpose and it came wrapped in a cloistered package of beliefs.

The mix of belief and fact in his comments revealed how our time and this culture confuse meanings. Perhaps we humans always have, but I think it is especially characteristic of this moment in history.

For several decades now, philosophers have divided cultural world views into three ways of thinking. I grew up immersed in one of them, what is known as the premodern era. This is the realm of “belief,” and I believed the fundamentally narrow view of a biblically defined understanding of life. The universe had a purpose. I knew what it was, and it came wrapped in a very cloistered package of beliefs.

Then I went to college, and that was the end of that. I became a thoroughly saturated modernist, elevating reason and relying on the scientific method. Facts not only mattered, they were the substance that composed all meaning and purpose. Without facts and an understanding that had some correspondence to a real world, meaning could not exist. That was the problem with the premodern point of view — it didn’t rely on facts, it only required belief, and belief did not need proof.

Then along came a group of philosophers who pointed out the inadequacies of the modern world’s dependence on thinking and facts to the exclusion of feelings and beliefs. Among many other ideas, the postmodernists promoted an understanding that an individual’s perspective and culture shapes facts and what people accept as real.

So when I was a child, the Christmas story – including its virgin birth narrative – was real. I believed it and I did not know anyone who did not, although I knew the world was full of such people. I figured they just didn’t get it yet. Then when I went to college, I quickly realized that no one relying on a scientific view of the world thought such things were true. Even the story itself came from unreliable sources. Much later it became apparent to me that yes, it is a story with interesting roots, but as a story it carries meanings. One or several of them that I could adopt as my own without believing all of the others as I had in a premodern worldview, or without dismissing the whole thing as preposterous, as I had from a modern perspective.

That shift in perspectives works for me in a religious context. But I become uneasy as it affects the political realm. What candidates say, and how they conduct their affairs, have repercussions in the real world. But many politicians seem to have embraced a postmodern way of operating — ignoring facts or any correspondence with a discernible reality. One Trump surrogate, for example, told MSNBC that there are “no such things as facts.”

Of course, this is not new. “We create our own reality,” the second President Bush told reporters a dozen years ago. Too many people believe that whatever someone in a high position or on television says must be true, even if later they deny it or say the opposite. In this election people reported accepting as true what they saw on social media – Facebook or Twitter – because the message came from a source they believe on a tool they use regularly. Spreading false stories became so commonplace, the Pope called it a sin. Nevertheless, people relied on those sound bites, GIFs and memes without fact-checking because they conformed to their beliefs.

Apparently two people can attend the same house of worship, believe the same interpretation of a faith tradition, and still hold opposing positions about the fate of the Earth. Similarly, half a nation can believe the tweets another half rejects as total fabrications. Is there no version of evident reality we hold in common?

As for me, I am very grateful that I write for a site that characterizes itself as fact-based journalism and employs a person to fact-check everything I write. You may not agree with the way I weave those facts into a way of understanding, but you can trust the facts. I didn’t make them up. Facts matter and I believe they make a difference in how we see the world and what we do about it.

Related Topics:Climate ChangeOp-Ed
Up Next