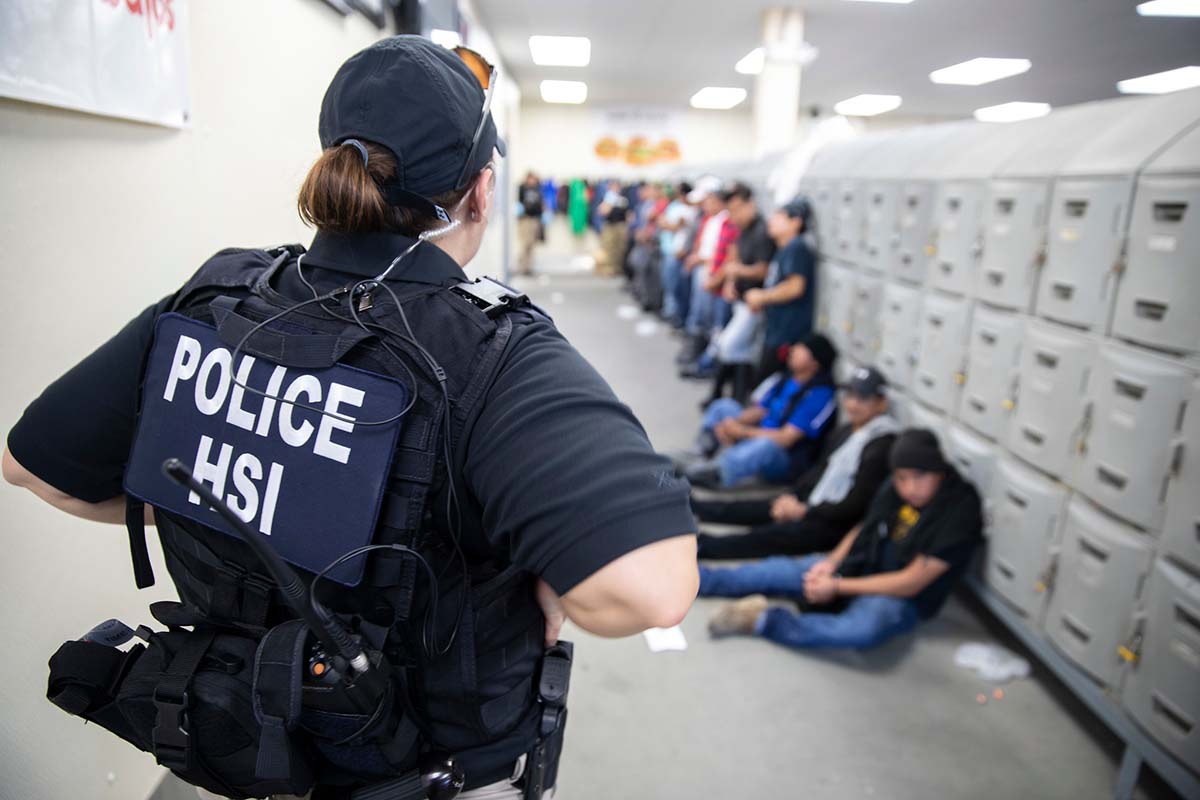 Immigration and Customs Enforcement conducts a worksite raid at a food processing plant in Canton, Mississippi on Aug. 7, 2019. Photo: ICE.

Since Joe Biden entered the White House, the administration has been outspoken about increasing protections for immigrant workers — a major shift in rhetoric from the previous president, Donald Trump. Now, the new administration may be taking its first steps toward concrete changes.

The Department of Homeland Security announced last month that it is ending the practice of worksite immigration enforcement raids, which expanded under the George W. Bush administration, tapered off when Barack Obama was president and then exploded under Trump.

Mass workplace arrests of immigrants during the Trump administration were resource intensive and allowed exploitative employers to call in raids as a tool to suppress and retaliate against workers who assert labor laws, Homeland Security Secretary Alejandro Mayorkas said in his new guidance to the nation’s top immigration enforcement agencies. To ensure that all workers, including those who are undocumented, can report labor violations and cooperate with investigations of “unscrupulous employers,” the new guidance also calls for the Department of Labor to collaborate with agencies like Immigration and Customs Enforcement and Customs and Border Protection to protect workers who come forward.

At the same time, the Biden administration appears to be following in the footsteps of Obama — who advocates called the “deporter in chief” — by continuing detention and deportation practices, rather than shifting to new approaches.

To understand what’s changed — and what hasn’t — for immigrant workers under the Biden administration, Capital & Main spoke to progressive policy expert Wendy Cervantes.

Cervantes advocates for federal and state policies that support low-income immigrants and their families as the director of immigration at the Center for Law and Social Policy, an anti-poverty organization based in Washington, D.C.

Capital & Main: The end to workplace immigration raids comes after decades of the practice under multiple presidents. How did these raids affect workers in the United States?

Since the Bush era, it was well established that these types of worksite operations have devastating consequences, especially when done without any advance notice to local agencies — whether it’s law enforcement, health and human services or child protective services. There are really long-term implications for the workers, their families and the broader community.

There was so much public outcry against the worksite raids that the Bush administration created humanitarian guidelines to ensure that when large scale operations happen, local agencies were notified in advance so they could be prepared to respond to the massive need for help, both in identifying parents and making sure that children didn’t end up going home to an empty house.

Under the Obama administration, there was a recognition that raids, even with advance notice, weren’t a smart way to do enforcement. It hurt workers’ rights and created a lot of fear, while doing very little to hold employers accountable. So those were largely ended under Obama.

“Under the Obama administration, there was a recognition that raids, even with advance notice, weren’t a smart way to do enforcement.”

Then under Trump, they came back with full force. Every single worksite raid was larger than the previous one. They were often carried out in ways that seemed intended to create a significant sense of fear. There was often the use of helicopters and armed agents.

The largest single state worksite raid in U.S. history happened at Mississippi poultry plants on the first day of school in August 2019. Because the schools were so close to the factories, a lot of kids actually witnessed their parents being handcuffed, thrown into white vans and taken away. Basically their nightmare coming true before their very eyes.

We learned a hard lesson once again that worksite raids have devastating consequences for children and families, for workers, for communities. And in the end, really do very little to improve workplace conditions or address our immigration laws at all.

What will the Biden administration’s new guidance on workplace immigration enforcement do?

The one thing the new memo does concretely is ensure that no worksite raids happen ever again, and [it] explicitly recognizes just how harmful they are. That is very huge. But there’s still a lot that remains to be seen.

The Biden administration is taking a first step in the process to improve coordination between the Department of Labor and the Department of Homeland Security to hold employers accountable for exploiting undocumented workers and to give those workers the courage and the policies in place to speak out against violations.

In the past, we have seen memorandums of understanding between the Department of Homeland Security and the Department of Labor. It’s meant to ensure that workers won’t be arrested as part of an immigration enforcement operation while a labor investigation is ongoing. That kind of collaboration and coordination allows for investigations to be done in a fair way, and ensures that workers feel empowered to report violations, even if they are undocumented.

The Biden administration is revisiting that to see what more can be done. The agencies will have 60 days to give feedback. That’s when we’re really going to see how they plan to hold employers accountable and what specific type of protection from deportation, or long-term relief and work permits, they can grant to undocumented workers who come forward to report workplace violations.

“Any effort to enforce our labor and immigration laws in a way that promotes workers’ rights is going to help both native born and immigrant workers, as well as undocumented workers.”

Advocates also really hope to see some response to the workers and families who were impacted by the Trump raids. Those families and their communities are continuing to suffer today. They were all simply working for their families, so we hope to see the Biden administration halt deportation proceedings, release anybody in ICE detention who doesn’t pose a threat to our community, support those already deported to return to the U.S. and provide prosecutorial discretion, work permits and financial compensation for families that paid bonds as high as $10,000 to get their relatives out of ICE detention.

That would go a long way in helping right the wrongs of what happened under the Trump administration and help these families get back on their feet.

How will the new guidance affect workers, both immigrant and native born?

Any effort to enforce our labor and immigration laws in a way that promotes workers’ rights is going to help both native born and immigrant workers, as well as undocumented workers. That’s because as long as we have any worker who’s afraid to lose his job and his ability to feed his children, or even worse, is afraid of being deported away from his children, he’s going to be less willing to speak out against unfair wages or unsafe conditions.

What kind of workplaces will be most affected by the end to workplace raids?

Meat packing plants, landscaping companies and tech companies are among those most often raided in the past. Industries where we see a lot of undocumented workers. They are also places where, not surprisingly, the conditions for workers are often incredibly poor.

In the Mississippi poultry plants, for example, countless workers cited really horrible conditions — freezer-like temperatures, low wages and long hours with only a short break that sometimes forced them to decide whether they wanted to use the bathroom or have a meal.

“Throughout the pandemic, immigrant workers are facing additional risks while often not being provided with protective gear like face masks.”

Unsafe conditions and inadequate protective gear have led to situations like a man in an Ohio meat packing plant who had his leg cut off by one of the machines used to grind meat. It was just horrific. Many of the folks in Mississippi talked about losing fingers. That was just a common occurrence in the factories. There was obviously no compensation, and people were frequently laid off following injuries because they weren’t able to work anymore. Throughout the pandemic, these workers are facing additional risks while often not being provided with protective gear like face masks. In most of these workplaces, there are no benefits.

These immigrant families are in many cases taking jobs that residents themselves wouldn’t take. Regardless, these are important jobs often considered essential during the pandemic, so they should be paying a living wage and providing safe conditions for people across the board.

Is there a connection between these labor rights issues and the current calls on Congress to expand pathways to citizenship using a budget process known as reconciliation?

At the end of the day, a pathway to citizenship, or some sort of protection from deportation and work permits, for undocumented workers is the only way to ensure full protections, benefits and a level playing field.

The entire budget reconciliation package is really important for working families across the board. If it stays in its current form, there is paid leave and a parole option that provides protection from deportation and work permits for five years, which would affect up to 7 million individuals, including essential workers like farm workers. That in itself will be huge because work permits provide the opportunity to work legally, to find work that might have better conditions, which in itself might improve conditions across the board. It would also provide access to employer based benefits like health insurance.

The top two officials in the U.S. Department of Labor — Secretary Marty Walsh, whose parents emigrated from Ireland, and Deputy Secretary Julie Su, whose parents came from China — have promised to prioritize protecting immigrants from workplace violations. What’s been done so far?

We still have to see the rhetoric fully realized in actual policies. It takes time to get these policies on paper and approved to start enforcing them. But it is frustrating to see how long it’s taken for some of these policies, and enforcement of labor rights, to really be happening in a robust way.

I do have hope, however, that there is a lot of goodwill and intention to uphold workers’ rights and immigrant rights simultaneously, and work with local labor agencies. For example, the Department of Labor has already been pushing the Department of Homeland Security with some prosecutorial discretion requests for individuals who have already reported labor violations.

Hopefully by next year, we can actually talk about what has changed for immigrant workers in the U.S.