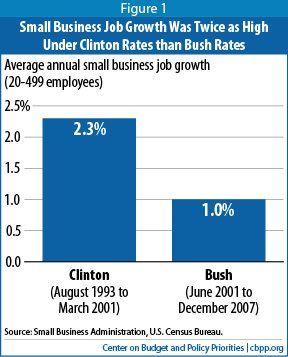 Republicans pride themselves of being the champions of small business owners. But it’s helpful to clarify what actually is their definition of a small business.

The Center on Budget and Policy Priorities (CBPP) released a report that shows only 2.5 percent of small business owners would be affected by allowing the Bush tax cuts to expire on the wealthiest taxpayers (top two marginal tax rates).

“The claims that allowing the Bush tax cuts for high-income people to expire would seriously harm small businesses rest on an exceedingly broad, and misleading, definition of ‘small business.’ The definition is so broad, in fact, that under it, both President Obama and Governor Romney would count as small business owners—as would 237 of the nation’s 400 wealthiest people.”

Did you catch that? The definition is so broad 237 of the nation’s 400 wealthiest people are considered small business owners.

CBPP explains this often-cited claim that allowing the Bush tax cuts to expire on upper income earners is so exaggerated it includes:

any taxpayer who receives any income from any “pass-through” entity (that is, an entity that does not pay corporate income tax on its profits but instead passes them through to its owners, who pay tax at the individual rates).

It is interesting to note that small business growth during the Clinton rates was twice as high as under the Bush-era tax rates.

(This post first appeared on the AFL-CIO’s Web site.)

Related Topics:Bush Tax Cuts
Up Next

Walmart: Any Job Is Not Always a Good Job