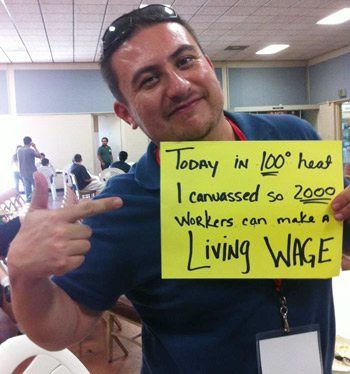 Long Beach hotel workers and community activists made history Tuesday, passing a living wage ballot measure that will help lift 2,000 people in that city’s tourism industry out of poverty.

Long Beach was one of three cities nationwide that passed minimum wage measures (San Jose and Albuquerque were the others), and the only one that enacted a law with paid sick leave. Workers at Long Beach’s large hotels will now earn at least $13 per hour and will have five paid sick days a year.

The passage of Measure N is the culmination of a multi-year effort by LAANE, UNITE HERE! (the union representing tourism industry workers) and the Long Beach Coalition for Good Jobs and a Healthy Community to build grassroots power in Long Beach, a city that for decades has been dominated by business interests largely disinterested in  the huge numbers of working poor. Beginning with a large-scale civic engagement project, LAANE and its coalition allies set out to change the status quo by reaching out to all segments of the city’s diverse voting population, from low-income voters of color to more conservative voters who decline to state their party affiliation and white Republican women. This was the formula used to reach 250,000 voters and gather 36,000 signatures to qualify the living wage measure for the November ballot.

Ultimately, the living wage campaign reached out to 500,000 voters both at the door and by mail. The campaign also attracted the support of more than 130 small businesses, six of the city’s nine city council members, dozens of religious leaders, hundreds of students and activists from the LGBT, environmental, Filipino, African American and Latino communities, among others. UNITE HERE! played a central role, mobilizing hundreds of hotel workers and providing critical resources.

Small businesses also played a very important role in the campaign, both endorsing Measure N and volunteering for the effort. They understood that living wage increases will result in an additional $7 million a year being invested in the Long Beach economy, directly benefiting local businesses.

The lesson is clear: Deep investment in communities pays off, and a broad coalition that transcends traditional partisan divides can be assembled for common sense economic justice measures.If we apply this lesson broadly, we can indeed build an economy that works for everyone.