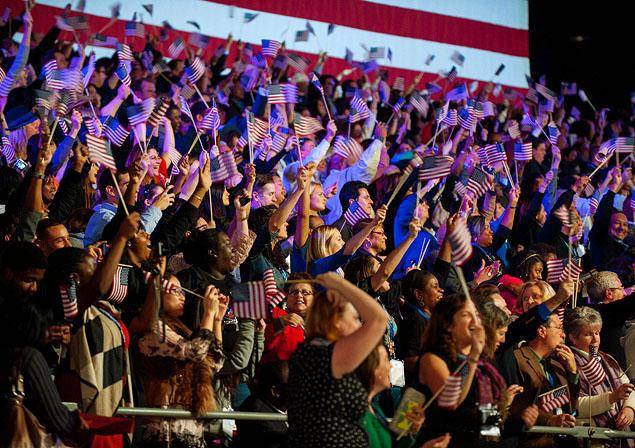 For me, especially once Mitt Romney named Paul Ryan as his running mate, the presidential race became a contest between two Americas: one traditional, Christian, white and wealthy; the other was, well, the Other — a pioneering America of varied ethnicities, incomes and spiritual traditions. The Rainbow Coalition that Jesse Jackson first named a generation ago has come to fruition and it’s a bright day for America. Obama garnered 70 percent of the Latino vote, 70 percent of the Asian vote, 93 of the black vote, 73 percent of the gay vote and close to 60 percent of the female vote. We once again proved that this country is always changing, and that change is our strength.

Obama’s victory is thus history’s victory, the people’s victory, and a victory for all those who believe we succeed best and most when we work together across the so-called “lines” that tradition and history have often put between people. This election was a victory for multiculturalism, the common good, for health care for all, for a clean environment, for jobs and community.

Obama is a symbol of all these, not because he is a black man, but because he is a mixed-race man. Ours is a mixed culture, the melting pot that has always been praised and that has always been the reality of our nation. Because of the effect this election will have on the Supreme Court, this is also a victory for justice. Everyone knew that Roe v. Wade, gay marriage and an end to the ridiculous notion that corporations are people hung in the balance.

We have been given an opportunity. If we build on it, we won’t have to ever again get bogged down in the negativity, the backwardness, the religious bigotry and cynicism of a Republican party that must now transform itself or perish. This Congress has been put on notice. My hope is that we have said goodbye to a certain cynical vision of America.

In the end, it came down to the character that Martin Luther King Jr. pointed to as the measure of a man. Obama remained honest, principled and direct right up until the polls closed, while Romney equivocated, flip-flopped and rationalized his ever-shifting principles. Character won last night. The character of a man and of a people.

Election 2012: How I Spent My Autumn Vacation