What happens when you grow up with a father who lost everything in the Great Depression? For Howard Sherman, you spend the rest of your life studying the causes of devastating financial collapses and how nations can avoid them.

With 22 books and more than a hundred articles, Sherman — a Visiting Scholar at UCLA and former chair of the U.C. Riverside Economics Department — is still fighting the good fight. His latest volume is Principles of Macroeconomics: Activist vs. Austerity Policies, co-written with Michael Meeropol. While the title may be dry, Sherman is anything but. In a recent interview, he offered blunt assessments of President Obama’s economic policies and why the U.S. labor movement should make full employment its highest priority.

Frying Pan News: Why did you write this book?

Howard Sherman: The main issue in economics is the distribution of income between workers and owners. The other is the instability of capitalism going from boom to bust. My book is about why in God’s name do we have cyclical unemployment with millions of people suffering unnecessarily every few years. My entire career has been dedicated to explaining these two questions and the cures.

FPN: What would you have said to Obama in 2009 when he took office?

HS: His chief economic advisor, Christina Romer, suggested that the stimulus should be $1.3 trillion. His closest advisors never gave him the memo. They thought they couldn’t get it through Congress, and even if they could that wasn’t necessary.

At least 90 percent of economists since the 1970s have believed there is no such thing as a recession caused by capitalism – they are all caused by external events. My view is the opposite – recessions are created by the capitalist economic system.

FPN: So what should Obama have done?

HS: When the banks were close to bankruptcy the U.S. should have done the same as many European countries and taken over the major banks. That would have ended the financial crisis and prevented future ones. Second, instead of $750 billion, including $250 million in tax reductions, we should have done a stimulus of at least $1.5 trillion – all in public projects aimed at employment. Third, we need a full employment act which gives automatic full employment to any worker when we are above two percent unemployment. The worst thing we did in the financial crisis was give money to the banks rather than taking over the financial institutions.

FPN: What would you advise Obama today?

HS: My three policies for this weak economy are a large stimulus, including low-cost Medicare for all, free public university education, clean energy projects, safe roads and more funds to bring employment [to] the states as high as before the recession; a Full Employment Act that guarantees a job to every willing worker with the government as employer of last resort; and, in the next financial crisis, public ownership of the largest banks about to fail. 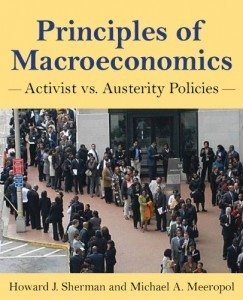 FPN: What would happen if we raised the minimum wage to $15 an hour?

HS: A much higher wage would contribute a lot to higher aggregate demand. By itself it is not sufficient because capitalists need demand and they also need low costs. The best way out is guaranteed full employment – that adds demand but it doesn’t reduce profits.

FPN: Why is there opposition to full employment, then?

HS: Because you have to think about the road to get there. We have very little private investment, so forget that. To stimulate the economy we need public projects, expanding the democratic public sphere. For example, the federal government should be giving enough money to the states to at least put them back where they were before the recession. After all, we all know building bridges, schools, roads, parks is productive. But this means expanding the public sphere rather than just giving money to banks and large corporations. Once there is enough stimulus from the public sphere, then you get a big increase in consumer demand. That demand means that private businesses will start to invest again. Eventually both wages and profits rise – full employment is the only time when that happens.

FPN: Many European countries have had much larger public sectors than the U.S. yet their economies are struggling too.

HS: That is because the policies of those countries has been austerity. Austerity is what the Republicans are preaching, and it means you keep reducing the size of the public sector, and that is a good way to get a recession.

FPN: Why does the U.S. labor movement continue to struggle?

HS: The basic answer is globalization — because of the global economy U.S. corporations have grown tremendously in strength since the 1970s. At the same time, unions have declined relative to the labor force. The second reason is the shift from industry to service. To organize 10,000 workers in one place is difficult but it can be done. To organize 10,000 workers scattered in hundreds of offices is extremely difficult. The third reason is that international capitalism has managed to increase competition from low-wage areas – first, by moving capital to other [places] and second, by exporting jobs. This is historically brand-new – the first time where American labor is forced into direct competition with billions of low-wage workers.

FPN: What’s the most encouraging trend you see happening today?

HS: The fact that over half of the Democratic Caucus defines itself as progressive. I remember when it was three people. We judge Congress overall, which in a way is unfair. If you get a progressive Democratic president and progressives become a majority of Congress, then you get movement. How did Roosevelt get so much good legislation? In 1936 the Republicans had only 10 senators. It’s pretty simple. The difference lies in the fact that Obama came to office after only three to four months of a really bad economy – Roosevelt came in after three years. People knew who to blame; in this case they forgot quickly. Plus you have a Supreme Court that allowed the corporations and the very rich to put unlimited money into the [political] system, in large part with no disclosure.

FPN: Could Obama have been that President?

HS: Maybe. When you read his biography it was obvious that he was a good organizer. We’d never had a president with an organizing background. If he had the majorities that Roosevelt had we would have universal health care and maybe free public higher education. That’s not revolution — when I went to college I paid about $40, most of that for a locker.

FPN: What can the American labor movement do to turn things around?

HS: Do what I said to get full employment – that should be their biggest struggle, because it always guarantees a higher standard of living. We did increase wages and salaries under Clinton because there was full employment. Full employment means a decrease of people in poverty and an increase in wages. It also means stronger unions.

FPN: But the 1990s saw weaker unions and a rise in working poverty.

HS: The greatest factor in the 1990s was the increase in power of global corporations and at the same time a big increase in international competition. That was not the case in the 1950s and 1960s. The U.S. had as much demand as it wanted, no competition and corporations figured it was better to give unions what they wanted. They could afford it.

FPN: Can global corporations afford to pay all workers a living wage?

HS: They are making extraordinary profits and profits would increase if they paid workers enough to sustain consumer demand. If you reduce profits by 10 percent, it’s getting them back to where they used to be.